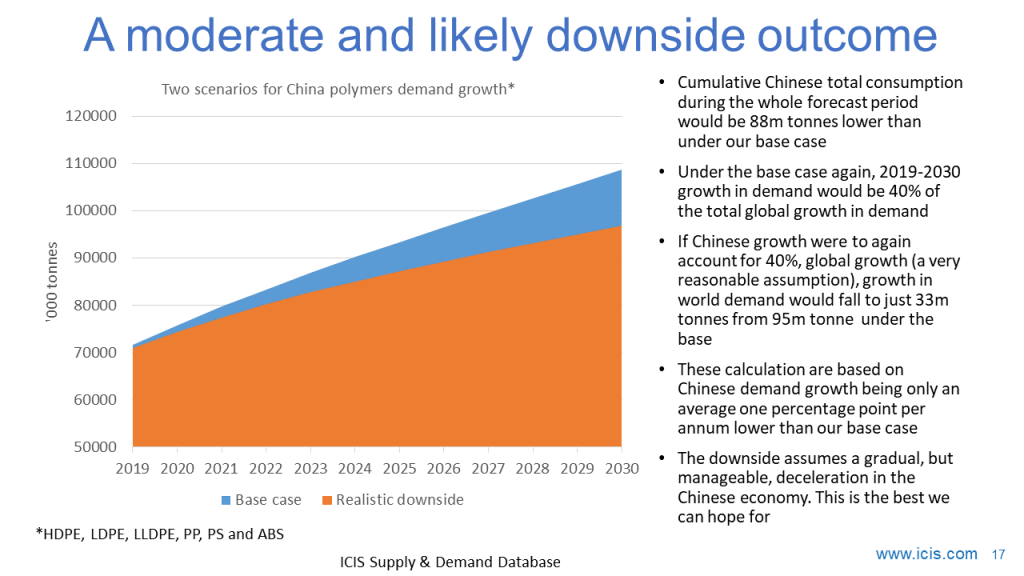 THIS IS not a normal downcycle. Please get over that idea however many people, both inside and outside your company, tell you this.

It is very tempting to believe that this is a normal bit of bloodletting that comes along ever so often. The temptation comes from the fact that it is always difficult to stand out on the crowd, go to your boss, and tell him, “We really shouldn’t build this new steam cracker” when most other people are saying the opposite. It can be career suicide.

But the far bigger danger is that the companies you work for end up with the wrong strategic approach to today’s very different world, and, as a result, end up being tomorrow’s Losers rather than Winners.

Take a look at the chart of chart above, which takes our base case Chinese demand growth forecasts for six of the major synthetic resins – high density polyethylene (PE), low density PE, linear-low density PE, polypropylene, polystyrene and acrylonitrile butadiene styrene – with a moderate downside where I take away, for arguments sake, one percentage point of growth per annum from 2019 until 2030. The end result is the loss of 88m tonnes of demand on a cumulative basis for the whole forecast period versus our base case.

Under or base case, Chinese 2019-2030 growth in demand would amount to 37m  tonnes – 40% of the total global growth in demand, making China by far the most important global driver of demand. If Chinese growth were to fulfill my downside, the global implications would be nothing short of huge. If Chinese growth were to again account for 40% of the total growth in global demand (and this seems reasonable given the importance of China for the global economy and the petrochemicals business), global growth would fall to just 33m tonnes from 95m tonne in our base case.

China isn’t going to collapse, hopefully, which is why I have only taken our base case polymers growth down by a percentage point. I see this a tail risk which will only be realised if the White House’s winner-takes-all trade, technology and geopolitical policies towards China produce the worst of possible outcomes. More likely is that there will be a muddle through halfway house of substantial but not fatal economic damage to both sides.

But demographics are economic destiny. China, as its population rapidly ages, is moving into an era of lower but higher quality growth. In its rich eastern and southern seaboard, petrochemicals markets are reaching maturity with consumption already at Western levels. In China’s vast and much poorer inland provinces, it is simply impossible for demand growth to catch up to coastal levels because of this key fact: In 2040, a third of the total rural population will be 65 or over, double the ratio for urban China.

My post last week, on the future of the China autos market, produced a lot of responses including the argument that by the standards of other developing countries and the West, Chinese auto ownership per a thousand people still has a lot of potential for growth. For example, in Malaysia, auto ownership is 435 per a thousand versus just 180 in China.

I don’t dispute that there will be further growth in Chinese auto ownership per a thousand people. Where I differ from mainstream analysis is my view that growth is likely to fall well below the expectations set by the unique 2009-2017 period, when economic stimulus was at an all-time peak. It is economically impossible for China to return to these levels of stimulus.

I thus suggested in my post last week that new auto sales would flat line at around 20m a year – still very good, but way below estimations of the market expanding to 30m sales by 2023 and 40m by 2030. Petrochemicals capacity to serve Chinese autos markets has been added globally on the basis of these kinds of levels of further sales growth.

Maybe, also, I am being too optimistic. We don’t know the extent to which ride sharing, through the development of autonomous vehicles, will develop in China. It would certainly suit China down to the ground to pour government money into the industry as it tries to escape its middle-income trap.

We also don’t know to what extent the Chinese economic growth will decline. As I said, I don’t expect a collapse, but my forecast for a moderately weaker-than-expected economy, leading to the loss of Chinese polymers demand versus our base case, could prove to be too optimistic.

The worse the economy becomes the stronger the motive to boost sales of second-hand cars for affordability reasons. Second-hand cars sales are still only 0.58 of new sales and could grow to more than three times new vehicles sales – above the typical level in richer Western markets.

Don’t forget the environment as well. China’s air quality has improved, but premature deaths from breathing in particulate matter are still way too high. This will lead to more restrictions on growth in sales of new gasoline and diesel vehicles. And for the economic reasons outlined above, the sales of new energy vehicles (plug-in hybrids, fuel cell and electric battery vehicles) will not lead to new vehicle sale growth much above 20m vehicles per year. Many of the new vehicle sales will involve replacing existing ownership of gasoline and diesel vehicles.

All the above arguments are similar for all the other petrochemical end-use markets in China – e.g. white goods and consumer electronics. In construction, we have gone past peak infrastructure spending. The huge amount of bridges, roads and railways that have been belt over the last 20 years has left China very limited demand for further infrastructure investment. 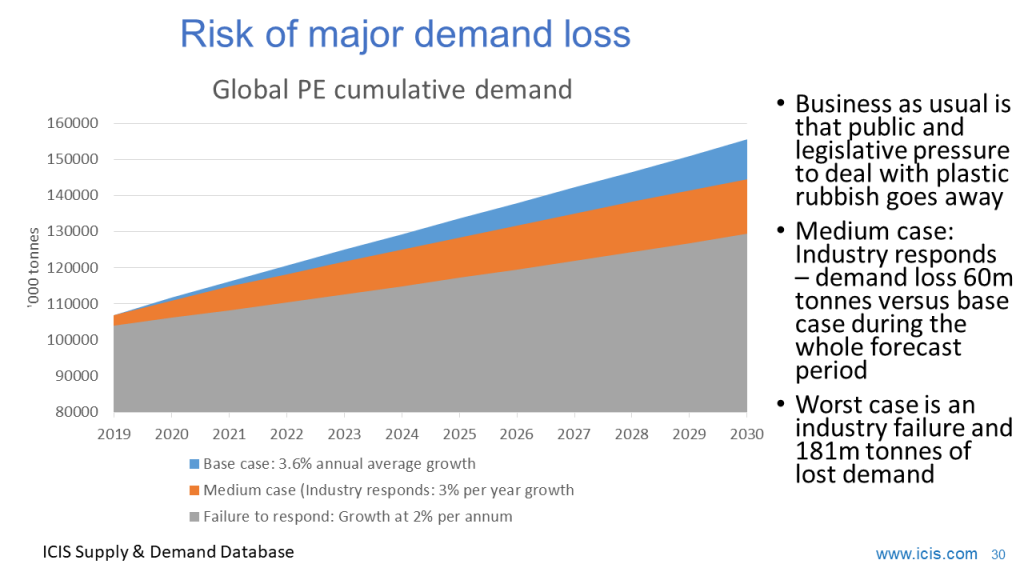 Sticking with China, a lot is made of the future growth in demand for flexible packaging, some 80% of which goes into food. But China is no different from anywhere else in the world. It will increasingly demand higher levels of recycling that will require packaging to be redesigned to use less polymers.

And in China, as with everywhere else in the world, where recycling is impossible end-use applications that have no societal value – such as plastic shopping bags, disposable coffee cups and single-use pouches –will be banned.

Events in China will demonstrate that this not just a rich-world phenomenon. Most of the plastic pollution in the world’s rivers and oceans emanates from the developing world and its governments are in general taking this issue very seriously. Take Indonesia as a prime example which behind China is the world’s biggest source of plastic rubbish in the oceans. It has promised to reduce marine plastic litter by 70% by 2025.

Expect therefore PE demand to be the hardest hit as of course it is the polymer most heavily used in single use applications. See the chart above at the beginning of this section which gives you three scenarios for the impact on global PE demand of the plastics rubbish crisis.

Also expect carbon/plastic taxes on the movement of polymers long distance. No longer will it be possible to move polymers great distances, from regions rich in cheap virgin hydrocarbon regions such as the US and the Middle East, without produces incurring these taxes. How long will these taxes take to be introduced? Probably not in the next couple of years, except perhaps in the EU, which, I believe, will lead the way through an introduction of carbon taxes on polymers and all other imports.

Note that I have said carbon/plastic taxes. Some of my contacts doubt the science behind claims that we are causing a potentially catastrophic change in our climate. I don’t doubt the science, but individual views actually don’t matter here because of these other essential facts:

Since 1995, the General Agreement on Tariffs and Trade and its successor, the World Trade Organisation, have overseen a 171% increase in global trade. Wow. This has underpinned globalisation of petrochemicals markets. You haven’t had to worry about where you build your plant as trade barriers have, in general, fallen.

This is no longer the case. Recycling by its nature is a local-for-local market because it is economically and environmentally unsustainable to move plastic waste long distances. As mechanical and chemicals recycling replaces the need to build new steam crackers, markets will therefore inevitably become localised. Europe for example has the potential to become much more self-sufficient in PE, especially through the growth in chemicals recycling. And, as I said, we will carbon/plastic taxes that limit long distance shipments.

We next have to consider the US/China split and the rise of isolationist and populist politics in countries other than just the US. We are heading towards a permanently more fractured world, with the biggest schism taking place between the US and China. Both have the potential to run entirely separate trading zones, with China likely to attract most of the developing world into its camp.

This has nothing short of enormous implications for petrochemicals trade flows. Let’s assume the world splits like this:  China attracts into it trading zone the whole of Africa, all of the Middle East, the Asia & Pacific region (South Asia, including India and Pakistan etc. and Southeast Asia), South Korea, Japan, Taiwan and the Former Soviet Union into its Sphere of Influence; The US aligns with the rest of North America, South & Central America and the EU.

For the much more limited number of new steam crackers that will need to be built in the future, it will matter far more where you build rather than what you build. Today, what you build is all that matters as success is about big, new well integrated petrochemicals complexes with access to cheap hydrocarbons feedstock.

Conclusion: 2020 Budgets and Beyond

In the next couple of weeks, I will break this down for you. First of all, I will focus on the immediate extent of the bloodletting and how you need to respond. I will look at where margins are heading across the different regions and how petrochemical sellers and buyers need to respond. Watch out for my 2020 Budget Outlooks.

Later on I will drill down in more detail into the longer term issues and offer guidance on how company strategies need to change. I will describe you can emerge as a Winner over the long term.