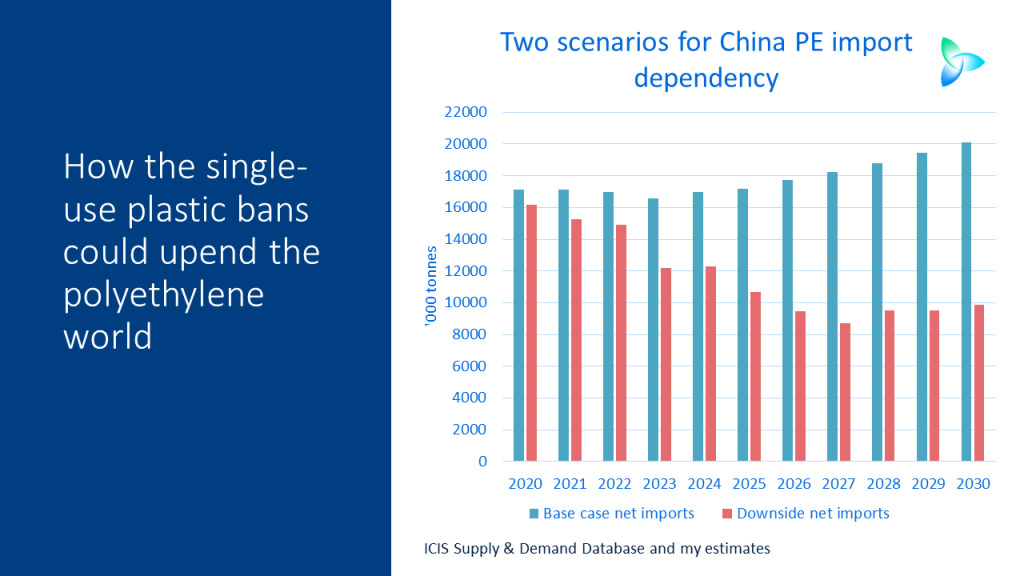 THE good news from a “business as usual” perspective is that China’s polyethylene (PE) demand might have exceeded our expectations in 2019 by some 800,000 tonnes.

Preliminary discussions with my contacts point towards growth of 10% in 2019 over last year rather than our forecast of 7.8% as a result of continued strong packaging demand for internet sales. One report suggested that internet sales growth might have been as high as 27.3% last year over 2018 to a staggering value of $1.935trn.

If my contacts are right demand across the three grades would have last year totalled around 33.9m tonnes versus our forecast of approximately 33.1m tonnes. But my colleagues from the ICIS Data and Analytics will come up with a refined and final demand number for 2019 demand in a few months’ time.

Assuming I am right for argument’s sake, exporters of PE to China should not be cheering to the rafters over the prospects for 2020 and beyond because of what I have been warning would happen since April last year – bans and restrictions on the consumption of single -use plastics in China.

Sure enough, it has happened. On Monday, the Chinese government announced the following:

Note here that what follows only looks at the consequences for PE demand. I will address the implications for other polymers in late posts.

PE producers are clutching at straws, if you can excuse the pun as one of the tableware items that will be banned is plastic straws, when they argue that high-density PE demand (HDPE) will be boosted by the banning of ultra-thin bags. Thicker bags will be needed, requiring more HDPE, they say.

True. But study all the negatives for demand in the rest of the bullet points. The biggest negative could well be bans on disposable bags, made from linear-low density PE (LLDPE), for internet sales.

This is huge. It is the booming demand for this type of packaging material – because of both the rise in online sales and restrictions on the imports of scrap cardboard – that has largely been behind the extraordinary overall growth in LLDPE demand over the last two years.

Remember that when China heavily restricted the imports of scrap or waste cardboard and plastic from January 2018, internet merchants who used to pack their goods in scrap cardboard had to switch to LLDPE. The fall in scrap plastic imports also obviously boosted virgin PE demand.

Perhaps Alibaba etc. will now have to switch back to local scrap cardboard, or to recycled PE.

Look through the rest of the list. This is nothing short of a huge gamechanger for the global PE industry given that China’s role in driving global demand has become so pivotal.

In 2000, China accounted for just 12% of global PE consumption. This had increased to 31% in 2019. Asia & Pacific, which has a population of some 3bn compared with China’s 1.4bn, saw its demand  rise from 9% of the global total to only 15%. In 2009, China overtook North America to become the biggest consumer of PE by volume.

That might be your response if you are a PE exporter to China, but it would be the wrong response. China will power ahead with building more steam crackers and downstream PE plants in order to reduce its big import demand for geopolitical security reasons.

Its remaining virgin PE demand must come from somewhere, so why not from local producers during an uncertain period in global trade when China cannot be sure of any of its trading partners? China will also run its existing capacity harder than many people expect for the same reason.

This will occur as China in parallel builds a state-of-the-art recycling business. China is often criticised for distorting “free markets” (there is no such thing) by pouring state money into new businesses. But it is merely following a well-trodden historical path, including in the US where government money helped develop the internet.

China will allocate hundreds of millions of dollars to creating a modern recycling business, with China’s technologies and expertise eventually exported. Expect these investments to be a key feature of the next five-year-plan, which runs from 2021 until 2025.

My first estimate of what this might mean for virgin PE import demand you can see in the above chart. My revised base case, which includes my higher estimate of demand in 2019, is for 2020-2030 demand growth at an average of 4%. Operating rates average 89%.

In my  extreme downside (or is it?), I have cut demand growth to 3% and raised operating rates to 91%. I have included as confirmed all the speculative and unconfirmed PE plants in our data base. I’ve also assumed higher local production via recyclates.

The end-result is 68m tonnes lower net imports on a cumulative basis for the whole forecast period of 2020-2030 in the downside versus the base case. Wow.

These estimates, or rather guesstimates, (I won’t grace them with the word forecasts to avoid being shot at) will be wrong. But that’s not the point. We all need to start doing the number crunching because of the biggest change in China’s PE market for many, many years. We need to prepare for a significant downside.

Would my downside be such a bad thing, anyway, if it forces PE producers to develop more sustainable business models? Absolutely not, in my view, because this is where future success lies. Our industry can help prevent global temperatures from rising by more than 1.5 degrees centigrade, aside from solving the plastics pollution issue.