China’s bans on single-use plastics: The impact on polyethylene demand 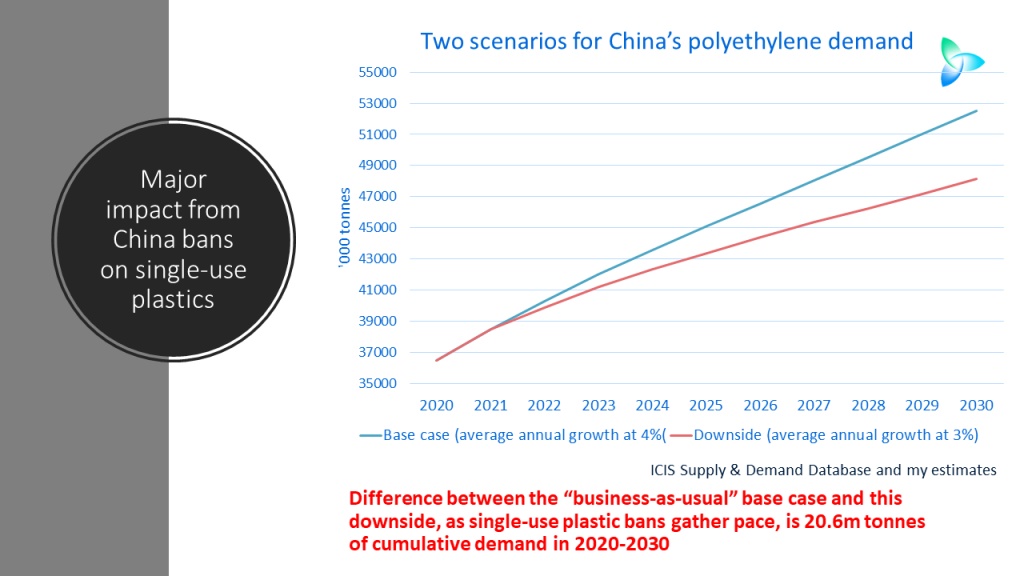 DON’T SAY I didn’t tell you. It has always been just a question of time before China took its plastic rubbish crisis very seriously, as I argued in an April 2019 blog post:

It seems clear that plastics rubbish will become a major focus of the Chinese government, affecting all consumption of virgin polymers that go into single-use applications.

I have long seen this as not just a domestic issue of dealing with the chronic pollution of waterways by plastic rubbish during a period of its history when China faces a chronic potable water shortage. As I wrote back in May 2018, this was also an issue of international credibility. China would want to demonstrate to the international community that it was taking this issue very seriously:

There is an international credibility factor here as well. As The Verdict, UK-based news and analysis service, writes, of the 2.75m tonnes of plastic rubbish dumped into the oceans by rivers every year, 55% comes from the Yangtze. Other rivers heavily polluted by plastic that flow through China are the Yellow River, the Pearl River, the Amur River and the Hai He River.

ICIS news yesterday reported that bans would be introduced on a wide range of single-use plastics.

By the end of 2020, disposable plastic cotton swabs, and the production of daily chemical products containing plastic microbeads, will be phased out.

Crucially, also, as this been a major source of China’s PE demand growth over the last five years, restrictions will be introduced on the amount of plastics used for packaging internet sales:

By the end of 2022, key provinces and cities such as Beijing, Shanghai, Guangdong, Fujian, Zhejiang, Jiangsu and others, will be prohibited from using disposable plastic packaging bags and woven bags for express deliveries of goods ordered online, The amount of plastic tapes used for these deliveries should also be reduced.

By the end of 2020, non-degradable plastic bags will be forbidden in key cities, and the scope of implementation will be gradually expanded in 2022 and 2025.

By 2025, the consumption of disposable plastic tableware in the catering and takeout area of​​cities above the prefecture level will be reduced by 30%.

China implementation will lead the world

I believe more bans on single-use plastics will follow and will be accompanied by a major upgrading in China’s recycling business, which, at the moment, is highly disorganised as it largely depends on migrant workers collecting bottles that are then sent to very unsophisticated, loss-making recycling plants.

As I again argued in my May 2018 post, major investments in the recycling business would take place as a means of boosting plastics and energy self-sufficiency.

Why throw away a perfectly re-usable polymer after one use when it can be recycled and reduce China’s dependence on virgin imports at a time of great geopolitical uncertainty? China cannot be sure of obtaining the oil, gas and other raw material imports it needs as we drift towards a bipolar world – hence the strategic importance of promoting the local recycling business.

A modern and highly sophisticated recycling business would also help China escape its middle-income trap. It needs to rapidly move up the manufacturing value chain in order to escape a middle-income that has arrived too early in its economic development because of a rapidly ageing population.

The scale of what China could achieve, and very quickly, in terms of both bans om single-use plastics and developing a modern recycling business MUST NOT be underestimated. Its increasingly centralised economy has the controls to implement changes at a pace and on a scale that would be impossible in any other country.

On the issue of demand, my revised base case (see the above slide) assumes annual average Chinese PE demand growth of 4% between now until 2020. By 2030, consumption reaches 52.2m tonnes.

This revised base case factors in demand growth between 2018 and 2019 of 10%, rather than our original forecast of 7.8% and a subsequent beneficial knock-on effect in 2020 and beyond. Please note that this is just my preliminary estimate, based on talking to market sources. Look out for my later post where I will explain what drove stronger-than-expected growth in 2019.

In the downside, as the number of bans on single-use plastic gathers pace in China, demand growth falls below this revised base case from 2021 onwards. The end-result is that cumulative consumption in the entire forecast period between 2020 and 2020 is 20.6m tonnes lower than the downside than the base case. Demand growth is at 3% per annum with consumption reaching 48m tonnes in 2030.

This is a first attempt at the impact on Chinese PE demand of bans on single-use plastics, and, as with all forecasts, it will be wrong.

But what this attempt shows is a.) The great value of our ICIS Supply & Demand Database in building alternative scenarios in order to future-proof your business, and b.) How “business as usual” is not the right approach for planning your PE business. We have entered an entirely new era during which sustainability pressures in general will upend all the safe and standard demand growth assumptions for petrochemicals in general.

PREVIOUS POST Why the trade deal is much ado about almost nothing
NEXT POST China single-use plastic bans: Polyethylene imports 68m tonnes lower in 2020-2030