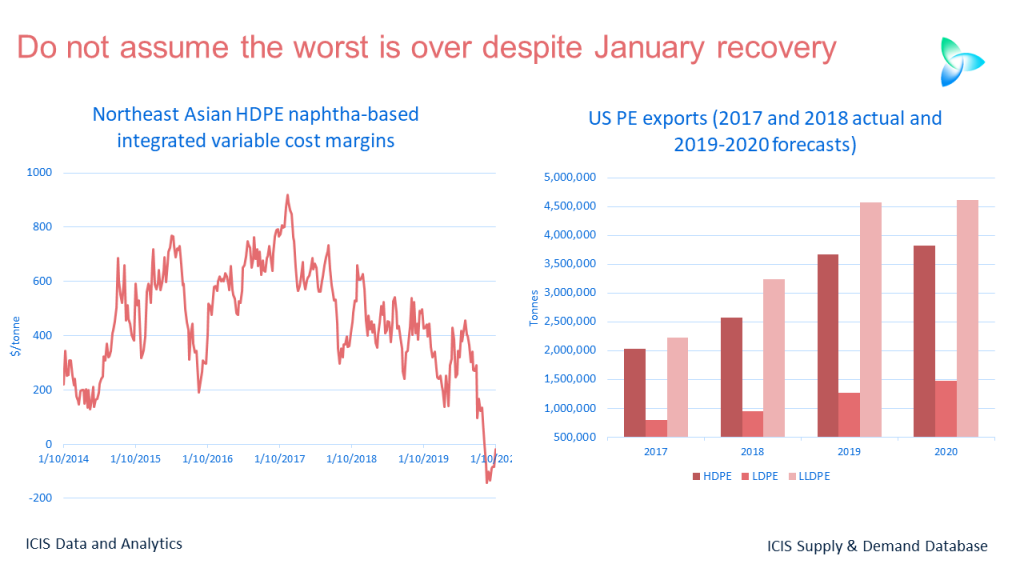 THE RISE in Asian spot ethylene prices is being cited as evidence of better downstream polyethylene (PE) supply and demand fundamentals. I am not convinced, partly because the ethylene spot market in Asia is so thinly traded that a myriad of unrelated factors could be behind the recent price increases.

PE prices have also gone up in response to the rise in ethylene prices. This not surprising given the improved sentiment, with the sentiment possibly amplified by a thinly traded market immediately ahead of the Lunar New Year which this year falls on 25 January.

But we must of course remember that higher spot ethylene prices have little to do with the Asian costs of PE production, as more than 95% of Asian PE producers either have their own steam crackers or buy ethylene on contract terms.

If you have your own stream cracker what obviously matters is your cost of naphtha and other feedstocks rather than the cost of ethylene, as ethylene is not your raw material but is instead an intermediate product on the way to making PE.

For those PE players who buy ethylene on contract, contract prices are always substantially cheaper than spot prices and don’t quickly respond to higher spot prices.

The positive news might be that higher ethylene prices have been accompanied by cuts in cracker operating rates. But which came first? If the rate cuts came first, the cuts may have been enough to only tighten surplus ethylene production and not PE output.

My understanding is that the vast bulk of Asian ethylene production is converted into derivatives such as PE and ethylene glycols. There is very little ethylene left over – hence, the very thinly-traded spot ethylene market.

What we might therefore have seen are minor rate cuts amongst the few Asian cracker operators that are net long on ethylene that have led to higher ethylene spot prices. Cutting rates deep enough and broad enough to effect PE production could be a different matter entirely.

Later today, though, the US and China should sit down to sign their Phase 1 trade deal. Even though the deal is a great deal of sound and fury signifying very little, more positive sentiment may add to the rally in ethylene and PE prices.

What are the fundamentals of the PE market instead telling us when we filter out all this distracting noise? In my view, we have yet to reach the bottom of this downcycle, which, as you can see from the chart on the left, has already pushed high-density (HDPE) and linear-low density PE (LLDPE) margins to record lows.

China to maintain high output, regardless of the PE market

We are a not going to see Asian or European PE rate cuts deep enough to prevent a very long global market in 2020.

Asian cracker operators will certainly not shut down as some are state-owned and will thus receive government support in order to maintain production. In South Korea, the privately-run crackers will continue to run, quite possibly at high rates, as they will continue to receive financial backing from other subsidiaries within their parent Chaebol, or industrial conglomerates.

China is bringing on-stream a large number of modern, state-of-the-art refinery-to-petrochemicals complexes. Because they are modern and well-integrated, the complexes are quite far to the left of the global cost curve.

We must also consider the following factors that will shape Chinese PE output in 2020:

The European PE producers are still making reasonable money. Their margins were down last year with weaker margins continuing into the early weeks of 2020. But they are nowhere close to the point of producers being forced to make deep rate cuts, never mind shut down.

Why on earth, also, would you shutter a fully depreciated European PE plant when an opinion is being quite widely expressed that we are already through the bottom of this downturn?

Let’s assume things do get worse. Even if this happens, permanent shutdowns of European cracker-to-PE plants seem to me unlikely because associated refineries would be under threat. Also think of the loss of cracker co-products and the impact on a wide range of downstream jobs. The EU regulators might well introduce trade protection measures because of these threats to the wider manufacturing sector.

We will also see a big rise in PE production in 2020. This will include what we forecast will be a 15% year-on-year rise in Chinese high-density production to 15.7m tonnes. LLDPE production will be up by 7% at 13.3m tonnes.

And as the above chart on the left shows, 2020 will mark another year of rising US production and thus exports as the local US market cannot possibly come close to absorbing the excess supply given its growth rates.

Big rises in production will also take place in Malaysia and Russia.

What about demand? Nothing convinces me that we are not still in a global manufacturing downturn which is mainly the result of the long-term structural slowdown in the Chinese economy. Plus, there is the fall in PE demand resulting from sustainability pressures.

The big unanswered question is whether we will see a catalyst that extends this downturn to the financial sector. We got away with it thanks to the quickly evaporating threat of a US/Iran war. But there are plenty of the other potential catalysts that I shall discuss in future blog posts.

PREVIOUS POST The polymers industry, climate change and a call to action
NEXT POST Why the trade deal is much ado about almost nothing