Why the trade deal is much ado about almost nothing

These are, as always, my personal views and do not express the views of ICIS. Thanks 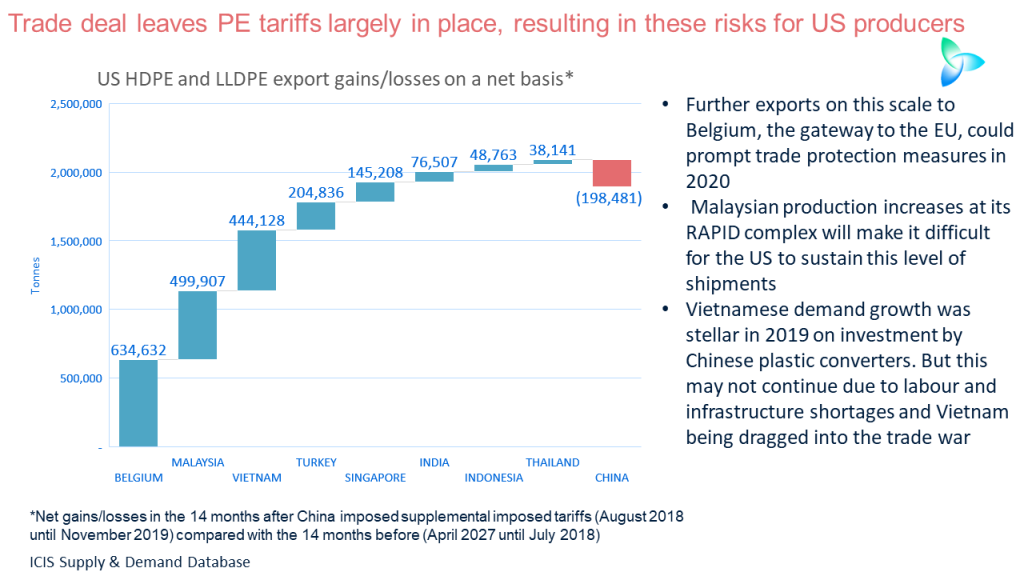 RELATIONSHIPS between the US and China reached a major low point in May 2018 when details of the full scale of US demands were leaked to the Chinese. They required China to abandon its economic growth model. As they say, “Good luck with that”.

The trade war subsequently waxed and waned in intensity, but there was no real progress on trade talks because of the tone of most presidential Tweets on China and round after round of tariffs.

Then came an important sea change when, towards the end of 2019, both sides recognised that that it was in their mutual interests to get a deal over the line.

In the case of the White House, a deal was viewed as a means of distracting attention away from the impeachment proceedings whilst also providing positive economic news in the run-up to this year’s presidential election.

As for China, it decided that it could no longer cope with the negative economic sentiment from the trade war at a time when it was struggling to deal with the far bigger challenges of a rapidly ageing population and unsustainable debt levels. The extent of this former problem was underlined by China’s 2019 birth rate falling to its lowest level in 70 years.

Negotiators on both sides therefore accepted that major compromises would have to be made if a deal was going to be reached.

The US decided to row back from asking China to dismantle its economic growth model – i.e. its demand that Beijing end all state subsidies for local manufacturing and service companies. US negotiators also agreed to park their insistence that China stop what they claimed was widespread cyber fraud.

China had to accede to the reality that the deal, which came to be called “Phase 1,” would not see the removal of all tariffs. In fact, as discussions progressed, it became clear that the US was only willing to reduce a very limited number of tariffs in order to maintain leverage over China. This of course meant that China would not be willing to make major tariffs cuts of its own.

The Chinese gave further ground by agreeing to resume economic reforms that they had frozen when the trade war began. These included greater protections for intellectual property and proprietary technologies and increased market access for US financial services companies.

In other words, Beijing promised to move back to Square One – where they were before the trade war began. “This raises the legitimate question of what purpose the trade war has served, beyond President Trump being able to claim that he has lived up to his election promise of being tough on China,” said an international trade lawyer who I spoke with last week.

We are thus where we are today, a Phase 1 trade deal that was signed last week that in substance seems to me to be very insubstantial.

Because both sides haven’t rolled back many tariffs, the burden on the global economy remains pretty much unchanged.

And because the big disagreements between the US and China haven’t been unresolved, there is still a very good chance that another dispute will flare up.

Although the US has paused its trade war with China, it is still engaged in a technology war, the legal framework for which it has patiently and methodically built-up over the last two years. At any time over the next few months, a dispute over say Huawei’s access to US technology could so easily blow up in our faces, resulting in us being back to another Square One – a full resumption of hostilities.

And even the terms of this paper-thin deal raises the potential for another fallout between the US and China as China has agreed to do what might turn to be the impossible – buy $200bn worth of US commodities, finished goods and services over the next two years compared with the level of purchases in 2017.

There are doubts over whether China can force privately-owned local companies to buy the $37bn worth of US commodities in 2020 that are required for the target to be met, reports the Financial Times. Nuts serve as a good example of the difficulties that lie ahead. China would have to this year raise its purchases of a US nuts to a value of no less than $2.5.bn from its previous record-high of $390m in 2012.

One can therefore easily imagine a scenario where China fails to meet its commitments, US farmers in the key Midwest election battleground States are disappointed, and the president feels obliged to penalise China.

What of the chances of a Phase 2 deal that might address the deep-seated, fundamental differences between the US and China? As The Wall Street Journal writes:

Chinese officials feel they have little to gain from a phase-two deal forcing Beijing to ease state control of the economy, and Mr Trump recently said that a phase-two agreement probably wouldn’t conclude until after the Nov. 3 election. The Chinese government continues to plan for a future where the two economies would be less intertwined and China would develop technology rather than rely on American imports.

I maintain that the only way US/Chinese relations can be reset to where they were three years ago is if US politicians on both sides of the political divide, both Republicans and Democrats, change course and accept that they should no longer attempt to halt the economic and geopolitical rise of China. It is as profound and as serious as this.

I am not making any judgement call on who is right or wrong here, and, anyway, such a call would be irrelevant because we need to think dispassionately in terms of what history teaches us. History teaches us that the US is following a familiar pattern of an incumbent Superpower challenging a rising Superpower. The usual results are ever-deeper economic and geopolitical divisions that end in war.

The biggest direct effect of the trade war on the global petrochemicals business has been the supplemental tariffs China has imposed on US petchems imports during a period when the US is engaged in its largest-ever capacity expansions. The most disruptive of the tariffs are on US polyethylene (PE) as it is in this polymer where many of the expansions are taking place.

Forget the effect on Chinese petrochemicals demand from the US tariffs that the US has imposed on Chinese finished-product imports. This is because firstly, Chinese exports to the US are only a tiny part of its overall GDP and secondly, China has moved manufacturing to other countries such as Vietnam in order to avoid the tariffs.

Returning to the subject of the Chinese tariffs on US PE, there was some modest good news in the Phase 1 deal.

China agreed not to impose 10% additional import tariffs on US low density PE (LDPE). The duties had been due to come into effect last December. Supplementary tariffs of 25% were also suspended on a very limited number of US speciality grades of high-density PE (HDPE) and linear-low density (LLDPE).

This latter concession has caused confusion as US producers are unsure about exactly which grades are affected and don’t expect the confusion to be sorted out until after this year’s Lunar New Year holidays, which run from 24 until 30 January.

But what seems clear that the 25% additional duties on US commodity grades of HDPE and LLDPE will remain in place during 2020 as US production further increases. We can as a result expect further disruptions to global PE trade following the big disruptions that took place in 2019 (see the chart at the beginning of this blog post).

As you can see, the standout country is Belgium where the net gain was the largest. Belgium is a distribution hub for the rest of the EU and so these imports largely represent a proxy for imports to the whole of the EU.

Malaysia is in close second place with Vietnam also significant because the rise in US shipments came from a very low base.

The fall in net exports to China obviously reflects US diversion to other markets in order to avoid the 25% duties.

What happens next? Here are three things to consider for 2020:

Thank goodness for small mercies. A small mercy is better than no mercy at all. The Phase 1 trade deal falls into this category in what id otherwise a pretty bleak global manufacturing environment.

But nobody should get carried away with the idea that this is a game changer, an end to the epoch-defining shift in the US and China relationship that threatens to permanently upend the petrochemicals business. It this shift that you need to keep sight of while you ignore all those people who tell you that geopolitics are a sideshow in a world of ever-rising demand and more or less stable trade flows.

PREVIOUS POST Higher Asian ethylene and polyethylene prices do not mean we are past the bottom of the downcycle
NEXT POST China's bans on single-use plastics: The impact on polyethylene demand