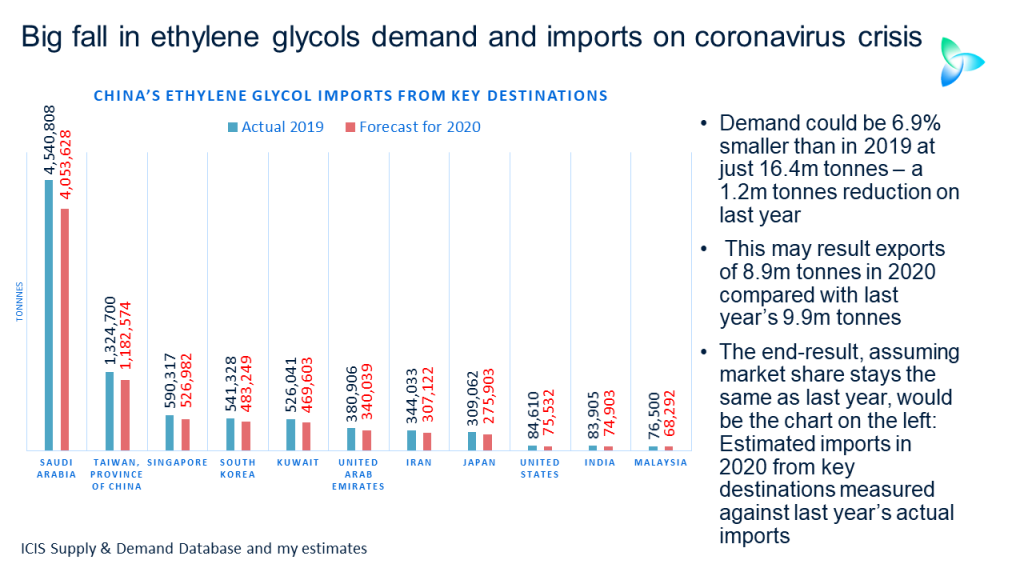 IN GEORGE ORWELL’S magnificent parody of communism, Animal Farm, he writes; “All animals are equal, but some animals are more equal than others’”.

So it goes in petrochemicals value chains. All the chains have been affected by the coronavirus outbreak. They all share the commonality of a big loss over at least two months in China, probably more likely three months of demand by the time China is fully back to work.

But some are more exposed  than others because of their lopsided overdependence on China as a source of demand, with ethylene glycols serving as one of the most prominent examples of this overdependence.

The scale of the impact of events in China on ethylene glycols demand is likely to exceed that of many other petrochemicals and polymers. The same applies to paraxylene which I shall cover in a separate and later posts, once, with the help of ICIS contacts, I’ve had the chance to crunch the data.

Because of the lopsided dependence of these value chains on China, all the talk of diversifying demand post-crisis to other markets in order to compensate for over-exposure to China is largely irrelevant. The ICIS data tell us that in any reasonable time frame this is impossible. China will remain the dominant source of global demand for many years to come.

There has been a significant long-term drift in apparel and non-apparel production from China to countries such as Bangladesh, Vietnam, Pakistan and India as a result of rising labour costs in China. This drift is likely to accelerated by coronavirus as brand owners and retailers seek to hedge their risks of over-exposure to China.

But whatever happens at the end of the polyester value chain will make little difference to China’s dominant positions upstream because, as I said, it has so much installed capacity in polyester fibres and PET resins that this cannot be replicated anywhere else in the foreseeable future. And whilst clothing production has moved to Bangladesh etc. these countries are still reliant on China for most their fabric imports – with the fabrics of course made from Chinese polyester fibres.

Firstly, before I present  you with some early guesstimates about how Chinese demand might be affected by the crisis – and crucially, also, Chinese imports of ethylene glycols – let’s look at some comparative data.

In 2000, Chinese polypropylene demand was 15% of the global total. But by the end of this year we expect this to have risen to 38%. This is bad enough in terms of exposure but now consider this:

On the impact on Chinese ethylene glycols demand, let’s assume that a 25% reduction in demand from our base case for a three-month period. This is based on estimates of the drop in domestic spending on apparel and non-apparel and curtailed local production up and down the polyester value chain.

We then need to add a further percentage to the loss of demand to take into account a drop in Chinese exports up and down the value chain, both the lost exports that have already occurred and a guesstimate of the impact on exports now that the coronavirus crisis has gone global. Let’s say this is another 25% off the base case for another three-month or quarterly period.

Then let’s assume the same ratios of local production to imports as in 2019 on the basis that new start-ups in 2020 will be delayed, thereby leaving China’s dependence on imports unchanged.

To get to the above chart, which shows  estimated imports from key destinations, I added to the 8.8m tonnes China’s exports in 2019 which amounted to just 11,709. This 8.9m tonnes I then multiplied by the percentage market shares in 2019 of China’s major ethylene glycols trading partners.

I then compared these estimated 2020 imports with the actual imports from these partners in 2019. I expressed the numbers in the above chart in tonnes, rather than a million tonnes, to make differences easier to see.

As you can see, imports from Saudi Arabia could see the biggest decline by far because Saudi Arabia is China’s biggest supplier.

What I have yet to factor in (watch this space) is how rising US production of ethylene glycols might affect the Chinese import market in 2020. Maybe extra US production will be a lot less than is expected because of operating rate cuts at polyethylene plants sharing the same ethylene feedstock as  ethylene glycols plants.

This would be due to shortages in container-shipping space – another by-product of the coronavirus crisis. US resin could end being stranded, forcing rate cuts at the cracker level which would curtail ethylene glycols supply.

The same dynamic could of course play out in the Middle East. But, as I said, I will come back to this theme of the impact on container shipping on polyethylene production and trade flows in a later post.

I know I will be shot at. I am used to facing the bullets. People will say, “It is impossible to make estimates at this moment as there are so many variables”. It is certainly true that the coronavirus crisis has created a set of variables more complex than probably at any other time in the 23 years I’ve been working with the petrochemicals industry, providing data and analysis.

But we have to try and collectively guesstimate and re-guesstimate the impact of this event as we all attempt to better understand the implications for our businesses. In the spirit of trying to help our ICIS customers, I  therefore hope this data and these thoughts provide support for your planning process.