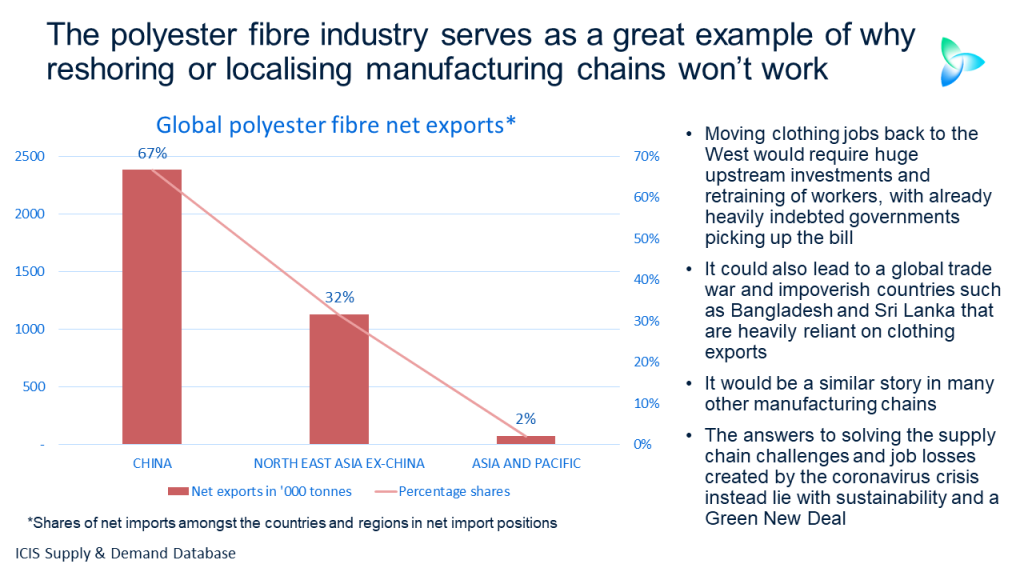 POLITICIANS, not just including the Populist variety, are talking a lot about reshoring or bringing back home manufacturing supply chains in response to the coronavirus pandemic. This is partly because China’s shutdown of its manufacturing capacity in February and early March made legislators wake up to the world’s heavy reliance on China for a huge range of raw materials and finished goods.

Take polyethylene terephthalate (PET) bottle-grade resins as an example. China is forecast to account for 43% of global net PET bottle-grade exports in 2020 with the Asia & Pacific region in distant second place at just 15%, according to the ICIS Supply & Demand Database. This is among the countries and regions in the world which export more than they import. The brief shutdown in China’s PE bottle-grade plants was, as a result, a significant threat to global food-supply chains.

Politicians of all stripes also need to find a way of repairing giant holes in economies. Hundreds of millions of jobs have been lost in a crisis that is bigger in scale than the Great Depression. In the UK, for instance, it has been calculated that the recession will be the worst recession since 1709. Merely talking about bringing back jobs back home in basic manufacturing could attract votes in northern England, Wales and Scotland where some communities have yet to fully recover from the closure of coal mines and steel mills during the 1980s.

But how realistic is it to unpick highly complex and very spread-out manufacturing supply chains and then rebuild them locally? In many cases not realistic at all, in my view. It would take many years of retraining workers and building new plants all the way up the supply chains to refining and petrochemicals if supply chains were to be relocated from China and back to the US, Europe and other countries and regions.

The new plants would add to already heavy oversupply in some manufacturing chains. Governments would have to pick up the bills for retraining workers and for providing the investment incentives necessary to bring factories back home. This would be during a period when government debt will already be ballooning from other crisis-relief measures.

The polyester fibre industry serves as a very good example of the difficulty in unpicking and reassembling manufacturing supply chains.

Everything revolves around China

The clothing industry began to migrate to China in the 1990s because of a very youthful population and the tens of millions of young Chinese people who were migrating from the countryside to the coastal cities for work. The concept of outsourcing was invented as Western retailers realised they could save a packet by shifting their orders from higher wage-cost locations to China, where a youthful population was keeping wages very low.

China then joined the World Trade Organisation (WTO) in late 2001. Membership meant the removal of quotas and tariffs that had restricted Chinese clothing and non-clothing exports (pillowcase and sheets etc.) to the West. Boom, China seized much more market share in Western markets, forcing the closure of textile mills and clothing factories in North America and Europe.

At first China had to import the fabric to make shirts, blouses, trousers and pillowcases. But  it integrated  upstream first to fabric and then to polyester fibre production. This has reached the point where in 2020, we expect China to account for no less than 67% of global net exports of polyester fibre with Northeast Asia ex-China in second place at 32%.

China’s next upstream step was into purified terephthalic acid (PTA). Scores of local plants were built in the post-2008 period as part of efforts to stimulate the economy in response to the Global Financial Crisis. The government-funded investment spree was also driven by the desire for greater polyester supply chain security. The turnaround has been remarkable. As recently as 2011, China’s net PTA imports were 6.5m tonnes. This year, we expect the country’s net exports to be at 1.3m tonnes.

Our base case further upstream into paraxylene is for China to remain a major net importer. This year we expect China to account for a staggering 93% (yes, no typo, 93%) of global net imports. This would represent 12.4m tonnes, down from last year’s actual net imports of 15m tonnes. But, despite a big build-up of local refining-to-PX capacity, we still expect China to be importing 11.5m tonnes by 2030. I see another scenario where China is much closer to self-sufficiency by the end of this decade. But whatever the outcome, China’s import volumes will clearly remain critical for the global PX business.

In ethylene glycols, another of the fibre intermediates, we expect China to account for 87% of global net imports in 2020 – 8.7m tonnes compared with actual net imports of 10m tonnes in 2019. I am with our base case as I do not believe China can build enough EG plants to meet its voracious demand. We expect net imports to rise to 11.5m tonnes by 2030. As with PX, China’s import demand drives the whole of the global EG business. Nobody should build a new plant anywhere unless they have guarantees of being able to export big volumes to China.

Just imagine trying to unravel all of this. Logically, if you want to achieve genuine reshoring you would need to build the whole polyester fibre chain in your home country or region, all the way back to the oil refineries that would make the mixed xylenes used to make PX and the steam crackers used to make ethylene to make EG.

The investment cost and overcapacity would be colossal. Let us firstly look at this from the perspective of PX and EG. In 2020, we estimate that Former USSR will account of 4% of global net PX exports with the Middle East accounting for 44% and Asia & Pacific 52%. Both Europe and North America are net importers, so if they wanted to achieve something close to supply chain independence, and ignoring the step further upstream into refining, vast investment dollars would be required. And what then would the Middle East and Asia & Pacific do with all their surplus PX?

It is a similar story in EG. In 2020, we expect that North America will account for 16% of global net exports and the Middle East 84%. Every other region in the world will be in a net import position.

And, as I said, imagine the retraining required to provide all the chemicals engineers necessary to run the  PX, EG, PTA and polyester fibre plants and downstream the seamstresses and tailors necessary to rejuvenate local garments industries. These skills disappeared a generation or more ago. Would people in the West, so accustomed to non-manufacturing work, be willing to retrain as seamstresses and tailors?  This is hard, physical work that we people in the West are no longer used to.

A return to Soviet-style command economics

For this to work, capitalism would have to be pretty much kicked out of the window. Huge state subsidies would be required to get the new polyester-fibre chain capacities off the ground. Workers would have to be lured away from other industries with attractive wages. How then would these new localised garment industries compete with the lower-cost garments from China – and even lower cost garments from countries such as Bangladesh, Sri Lanka, India and Vietnam where labour costs are lower than in China?

The only answer would be the kind of economic autarky and command economics that characterised the Former Soviet Union. And in order to provide the economic incentives necessary to persuade Western retailers to buy more expensive local garments, trade barriers would have to be imposed against China and Sri Lanka etc. We could end up in a global trade war, and probably a new Cold War as well.

The effect on countries such as Bangladesh of such a trade war could be devastating. 81% of the country’s exports comprise ready-made garments, clothing and non-clothing production generate 20% of GDP and the industries employ 20m people. Bangladesh is already suffering enough from the cancellation of Western retail orders resulting from the coronavirus pandemic.

China would not take this lying down. It would strengthen economic links to other developing countries through its Belt and Road Initiative, which includes Bangladesh – a major importer of Chinese polyester fabrics and fibres which are used to supply Bangladesh garment factories. China would also impose reciprocal tariffs on its economic opponents, thereby accelerating the drift towards a bipolar world.

The story is similar for many other manufacturing supply chains because China is at the heart of so many manufacturing chains. You cannot quickly or easily wind back 30 years of global economic history.

What are the answers then? How can we localise manufacturing chains to reduce the risk of future supply-chain disruptions? How do we create the millions of new jobs essential for repairing holes in economies? The answer is sustainability, a global New Green Deal, which I shall discuss in later posts.

PREVIOUS POST Beware of the fragile nature of the oil and petrochemical price recovery
NEXT POST Coronavirus, impact on the developing world and the scale of demand losses