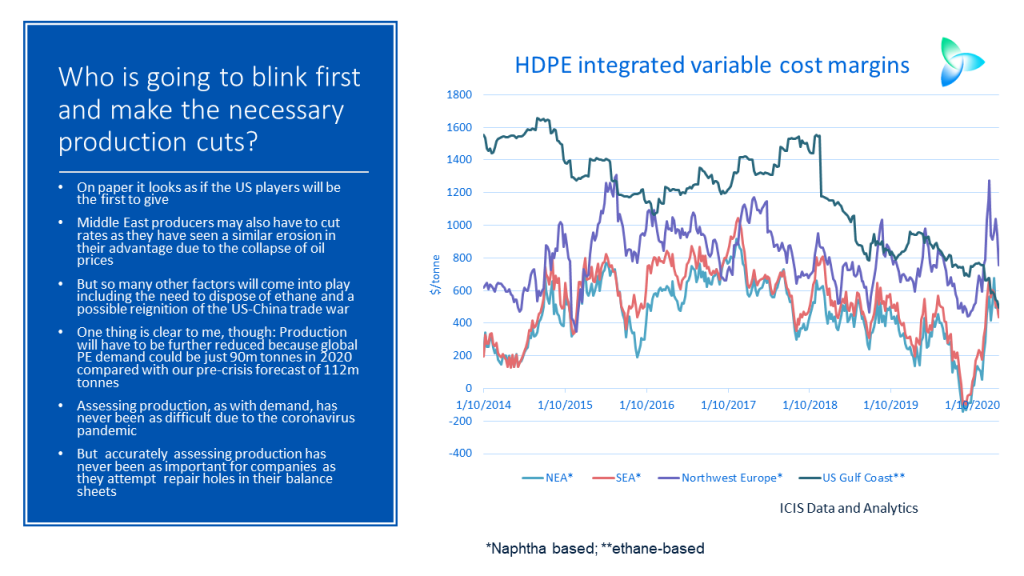 IT IS NOT just a razor-like focus on petrochemicals demand that will get you through the crisis. Also essential is an equally close focus on production in a world where all the old assumptions about winners and losers have been turned upside down. But, as with demand, monitoring and forecasting production has never been as complicated because of all the variables created by the coronavirus crisis. Let me explain why using polyethylene (PE) as an example.

Traditional curve analysis has the Middle East firmly to the left of the cost curve, along with more recently the US as a result of the shale gas revolution. But because of the collapse of oil prices, the old assumptions on competitiveness no longer apply. Today’s upside-down world in is my view set to remain with us for good as will be at around $30/bbl over the long term.

The ICIS integrated variable cost PE margin analysis shows that US ethane-based Gulf Coast producers are now just behind southeast Asia and northeast Asia naphtha-based players. This is the first time I can recall Asian naphtha crackers being ahead of ethane crackers in any location in the 23 years I’ve been working for ICIS.

If you add in the lower freight costs that southeast Asia and northeast Asia producers need to access key Asian markets, including most importantly China, the Asian players are a long way ahead of the US.

The margins of European naphtha-based producers are a long way ahead of US ethane-based producers, even without taking into account cheaper freight costs for European PE producers supplying local customers.

We do not provide multi-client reports on Middle East PE margins. But the trend lines will be very similar to what you see above as the Middle East, like the US, is ethane based. The collapse in oil prices has pretty much wiped out the ethane advantage for both regions.

This has raised discussions over whether we could soon see significant operating rate cuts by US and Middle East producers. Normally in a weak market it is the other way round with the naphtha-based producers expected to bear the brunt of the rate cuts.

It is not just about margins, though

The new US cracker-PE complexes will not in my view provide anywhere close to the returns on investments that were expected before coronavirus and the collapse in oil prices.

Cutbacks in US shale-oil production may also reduce ethane availability in the US, if they haven’t done so already, thereby raising ethane feedstock costs. US shale wells, like their conventional counterparts, produce associated gases. But none of this will necessarily result in US production cuts as several of the new US cracker-to-PE complexes are owned by natural gas producers.

The natural gas players might well run their petrochemical plants at high rates despite poor petrochemical economics in order to dispose of unwanted ethane as ethylene production is the only end-use market for ethane. There are safety limits on how much ethane you can leave in methane, or natural gas, when the methane is delivered by domestic pipelines.

The evidence so far this year suggests that the new PE plants will run hard regardless of their variable cost positions. In Q1, US high-density (HDPE) exports rose by 33% year-on-year to just over 1m tonnes. Linear-low density (LLDPE) exports were 40% higher at 1.4m tonnes.

Another driver behind a continued surge in US exports could be weak domestic demand. Dow Chemical’s decision to temporarily idle 10% of its global PE and elastomers capacity, which comprises entirely of plants in the US, points towards the weakness of local consumption.

What about the Middle East? It too might see ethane availability reduced and ethane costs rise as a result of the big OPEC+ cutbacks in oil production.

And one view is that on the demand front, the hugely export reliant region will be forced to make cutbacks if lockdowns in southeast Asia have to be re-imposed as a result of a secondary wave of the virus, and if, as I think will be the case, the Chinese economic recovery is a lot weaker than official data suggest.

A critical issue for China’s PE demand during the rest of this year will be the extent of the recovery in China’s exports of finished goods. Some 10-15% of China’s PE imports are re-exported either as wrapping for finished goods or as raw materials to make the finished goods themselves.

There is very little chance, in my view, of a significant recovery in overseas demand for Chinese exports during the remainder of 2020, even if the emergence from lockdowns goes smoothly. This is because of the enormous wealth loss caused by the global coronavirus crisis and large unsold stocks of goods in wholesale warehouses and retail outlets.

But there is a strong argument to make that the Middle East will run hard for as long as it can, provided it has enough ethane available, as many of its petrochemical plants are fully depreciated. The region should still just about cover its variable costs even if market conditions further deteriorate. It also enjoys freight-cost advantages over the US in exports to Asian markets.

And again, as with the US, the Middle East cannot do anything with ethane other than make it into ethylene or flare or burn the ethane. It is a waste product that must be disposed of before crude oil can be exported. Why, in effect, flare or burn money even if the money you are making from PE is less than you expected? If you are just about covering variable costs that would be crazy.

There is a proviso here, though, and this applies to HDPE pipe grade and low-density PE (LDPE) wire and cable grade resins. Rate cuts may have to take place, if they have not occurred already, at Middle East plants focusing on these grades because of the collapse in construction activity. But watch this space. China may announce yet another round of major infrastructure spending during this year’s delayed National People’s Congress meeting, which begins on 22 May – this Friday. This would boost demand for HDPE pipe and LDPE wire and cable grades.

You also need to consider the politics

As for the naphtha crackers, why on earth should they cut production? As our margin data show, they are making great money.

But someone is going to have to blink. I believe more rates, to add to those already made by Dow and other companies, will have to be made in 2020 as:

Politics further complicate evaluation of which producers will be forced to make rate cuts.

The US-China relationship is in further peril as President Trump is getting tough on China again during the build-up to the November Presidential Election. New China tariffs on US PE, if the trade war were to reignite, might force US producers to sell more to Europe and to other parts of Asia.

If Europe faced a flood of US PE imports that threatened the closure of local producers, the EU could also impose additional tariffs on US PE. Local steam cracker-to-PE complexes generate many jobs in downstream manufacturing. During a time of high unemployment, Europe can ill afford to lose these jobs. In such an event, the US could be forced to cut operating rates.

A further complication is feedstock availability. This may well be an academic issue because of the scale of the PE demand loss. But as of two weeks ago cutbacks in European refinery operating rates – the result of the collapse in fuels demand – had jeopardised naphtha supply to 31% of European ethylene capacity. There are, though, no indications in any region of a lack of naphtha supply restricting cracker operating rates.

If your competitor decides to cut output and you find out about the decision pretty much in real time, which is a service we provide, this presents an opportunity for you to produce and sell more. Every extra tonne of sales is vital in this environment as you try and repair holes in your balance sheet, and as you attempt to perform better than your competitors for the sake of your share price.