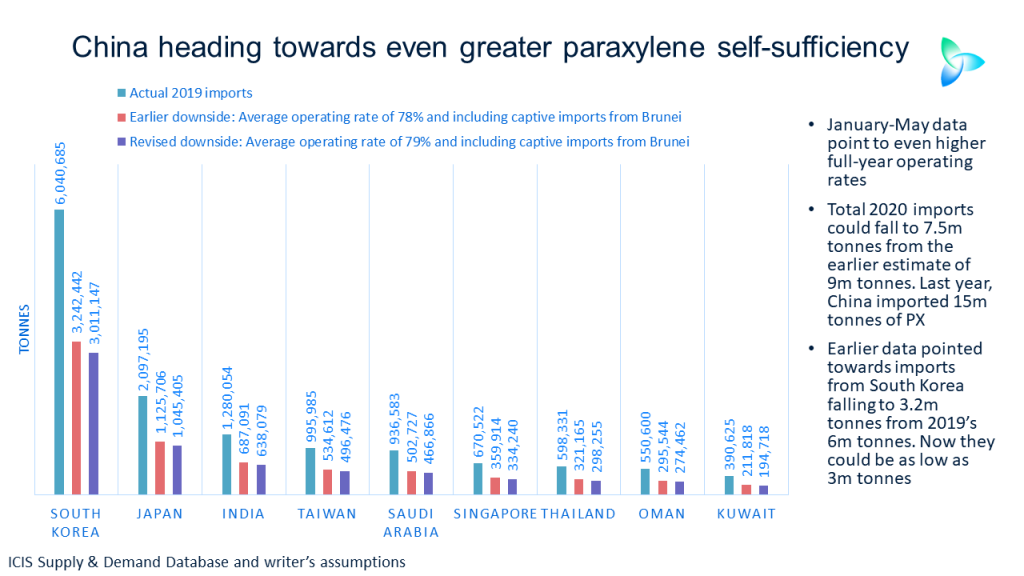 It is sadly not as simple as this, as the arrival of record volumes of oil in China during the first seven months of this year reflected a strategic decision by China’s government to allow local refiners to take advantage of record-low prices during the first four months of this year. Many of the arrivals in May-July represent cargoes purchased before then, when prices went to as low as below $10/bbl.

What pointed to this move was Beijing’s decision to allow independent or privately-owned refiners to use most of their full-year 2020 quotas for importing oil during the period of cheaper crude prices.

Sure, China’s economy is getting better. Recent month-on-month numbers for retail sales and industrial production, among others, have looked very healthy. But month-on-month numbers were always going to improve because China’s economy has gone from virtual standstill in Q1, at the height of the pandemic, to levels of more normal economic activity. Think of this in terms of a speedometer. If your car goes from travelling at 30 miles/hour to 60 miles/hour, that is a 100% increase. But this is still only 60 miles/hour.

And, of course, as has always been the case, official Chinese government statistics need to be taken with a large pinch of salt. For instance, yesterday saw the release of the official GDP growth number for Q2 which was a 3.2% increase, year-on-year, compared with a 6.8% contraction during the first quarter. Does the Q2 number reflect the real level of the recovery? Plus, digging into the details of the official data, second quarter retail sales fell by 3.9% whereas industrial production grew by 4.4%. To what extent has the sharp rise in industrial production, supported by the big rise in oil imports, got ahead of actual demand?

You must consider why the government allowed a big rise in oil imports when prices were cheap. This was to give local refineries economic support during a difficult year. Transportation fuels demand is still below pre-crisis levels.  The cheap oil is also supporting petrochemicals producers in a weaker demand environment. They are benefiting from competitively priced naphtha and LPG feedstock, etc, supplied by the local refineries.

There are two other critical factors you should consider:

New scenarios for one petrochemical: Paraxylene

Last month I detailed how China’s paraxylene (PX) imports could fall to just 9m tonnes in 2020 from 15m tonnes in 2019. This would result in China importing just 3.2m tonnes from South Korea, its biggest PX trading partner – 46% lower than 2019 imports from South Korea of 6m tonnes. Similar falls would have been seen in imports from China’s other major trading partners such as Japan, India, Saudi Arabia and Singapore.

How I calculated these declines was to look at our estimates for January-April China PX production. If this were to continue throughout 2020, the average operating rate would be 78% across of all China’s PX plants versus our base case of 64%. I assumed that China’s major trading partners would, for argument’s sake, win the same percentage shares of total imports in 2020 as they did in 2019. This allowed me to estimate 2020 imports from South Korea and other sources.

Also factored into these assessments was Brunei Hengyi Petrochemical’s 1.5m tonnes/year PX plant, located in Brunei, which is 70% owned by Hengyi – a Chinese purified terephthalic acid (PTA) producer. I assumed that most of the PX from the Brunei facility would be exported to China – 80% of its 2020 production. This would of course further narrow the import opportunities for non-Chinese owned overseas producers.

The latest data point towards the possibility of even greater Chinese self-sufficiency (see Scenario 2 for 2020 in the above chart).

Our estimate for January-May China PX production was no less than 77% higher on a year-on-year basis. This indicates a 79% average operating rate for the full-year 2020 – one percentage point higher than what the January-April production data indicated. January-May 2020 imports from the Brunei plant point towards more than 90% of its 2020 production being shipped to China as against my earlier estimate of 80%.

The latest production data point to Chinese imports from non-China owned plants falling to just 7.5m tonnes from the 9m tonnes indicated by the January-April data. Imports from South Korea would be at 3m tonnes – 200,000 tonnes less than what the January-April numbers pointed towards.

As with other petrochemicals, this suggests that China’s PX producers are benefiting from cheaper feedstock from local refineries (in many cases, the new PX plants are integrated upstream into refining).

China also hopes that its textiles and garments exports will bounce back later this year following a 20-30% decline in January-May. However, given that concerns of a second wave of the coronavirus pandemic affecting much of the rest of the world, a recovery may not happen.

Something would have to give if there is no recovery in exports, as China’s apparent PX demand growth in January-May was 21% (apparent demand is local production plus net imports). Our forecast for full-year PX demand growth is minus 1%.  In the event of no recovery in textile and garments exports, I believe what would give would be PX imports, for all the reasons given above.

Let’s not forget, however, the effect of the devastating floods that have occurred over the last few weeks, the worst since 1998. This may well have affected local PX production in June and July. PX imports could also be down because of the disruption to local ports. Plus, of course, the floods have damaged severely hampered China’s economic recovery.

Conclusion: A much more complex world

This is a further example of the much more complex world in which we now live in as a result of the pandemic.

Today’s post also points to the long-standing importance of understanding Chinese government policy when it comes to estimating refinery and petrochemicals capacity additions in China and how plants are operated when they have been brought onstream. The same applies to many other countries. Political and social factors are major drivers of investment and operating decisions, and are much more important than plant-specific cost efficiencies.

What this post also underlines is the need to crunch, re-crunch and then re-crunch data while always bearing in mind all the complexities. This is where ICIS can help you.