Home Blogs Asian Chemical Connections China’s real GDP could have been negative in Q2: What this may mean for PP

China’s real GDP could have been negative in Q2: What this may mean for PP 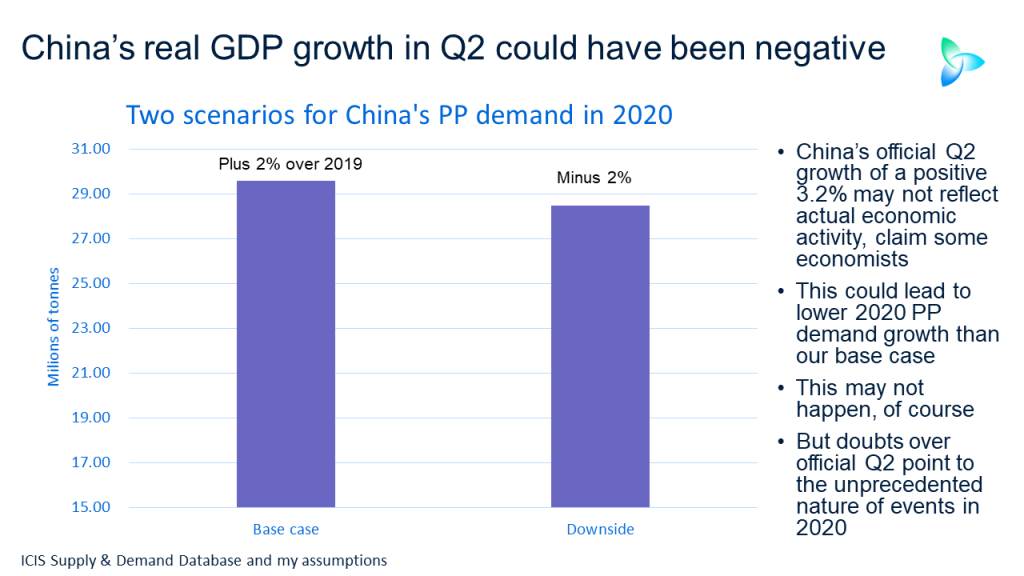 CHINA’S official GDP growth of 3.2% for Q2, which was announced last week, may not reflect real levels of economic activity, according to Derek Scissors, a resident scholar at the American Enterprise Institute in Washington, a non-profit research body.

He goes as far as to say that the Chinese economy probably contracted during the second quarter following its 6.8% decline in Q2.

This should come as no surprise to you given long-standing doubts over the accuracy of official government data. China is of course a vast country and yet once its official GDP numbers are announced, they are never revised. This is in contrast with the US where GDP numbers for each quarter are constantly updated.

Scissors argued that the rebound to 3.2% growth did not add up based on the government’s own tracking of industrial production.

“On 27 May, the National Bureau of Statistics said 67.4% of surveyed firms were at 80% or more of normal production. So nearly one-third saw at least a 20% decline. This is hard to reconcile with year-on-year growth,” he wrote last week.

He said it was the same story in services where official numbers at the end of June indicated that 10% of firms in the sector had yet to restart, and yet the headline GDP number implied an expansion in service-sector activity during the second quarter.

“Retail sales supposedly improved sharply in Q2, to only a 3.9% decline. But core consumer price inflation was very low and slowing, rather than picking up due to strengthening demand,” Scissors added.

“Until and unless global demand recovers more forcefully, the incremental quarterly improvement just seen will make for a contraction for full-year 2020. No matter the lens, gains over Q1 are marginal,” the survey said.

China not only has to contend with the pandemic. It is also facing the economic impact of the worst floods the country has seen for at least 30 years, with economic damage initially assessed at $8.6bn.

This seems likely to move higher as further heavy rains are expected over the next week in southern provinces. The worst-affected provinces are Anhui, Jiangsu and Zhejiang. Wuhan province, which was the epicentre of China’s coronavirus outbreak, has also been affected by the floods.

The impact on PP demand and imports

This is a further reminder, just in case you needed one, of the importance to your petrochemicals business of independent and objective analysis of the Chinese economy.

What I have presented above is obviously only a sample of what is out there and freely available through that wonderful research tool, Google. It is also only a starting point and needs to be verified or contradicted by first-hand data crunching and your own on-the-ground reading of sentiment in China.

But, on the assumption that the China growth sceptics I’ve just quoted are right, let’s think through what this could mean for China’s PP demand growth and imports in 2020, using our indispensable ICIS Supply & Demand data.

I hope this helps you build scenarios. ICIS data sets are also available across all the other petrochemicals and polymers in China.

Looking at the numbers in tonnes, January-April apparent demand when annualised would result in full-year apparent demand of 30.9m tonnes. This compares with our estimate of real demand (adjusted for inventory distortions for the full year of 29,6m tonnes – 2% higher than last year.

This implies overstocking of 1.3m tonnes when you consider the exact numbers, assuming our 2% growth forecast is right. In such an event, and with annual local production growth at 10%, this year’s total imports would fall to 3.6m tonnes from 2019’s 5.2m tonnes

Strong growth in local production is in line with my argument that China will push very hard towards much greater petrochemicals and polymers self-sufficiency in 2020, in order add value to its economy through running state-of-the-art new plants at high operating rates.

High capacity utilisation throughout 2020 could be supported by the availability of cheap feedstock from local refineries. Local refineries may be able to supply competitive feedstock thanks to low cost oil imports in H1 2020.

Another reason why local plants will, in my view, be run hard this year is to hedge against the risk of an interruption in imports because of the pandemic and rising geopolitical tensions.

Our estimate of local production up until June (I’ve only used January-May production data to estimate apparent demand as June import numbers have yet to be released) also show production growth of 10%. This indicates no disruption to production from the floods as many of China’s plants are outside the affected provinces.

The more likely effect on the Chinese PP sector of the global pandemic and the floods is 2020 demand growth lower than our base case forecast of 2%. Assume  minus 2% growth – and an again annual production increase of 10% – and this year’s imports would fall to just 2.5m tonnes

Minus 2% may seem to you as too pessimistic. A fall to annual imports of just 2.5m tonnes would also require a destocking process on a huge scale, implying excess inventories so far this year at an eye-wateringly high 2.4m tonnes.

But in 2008, growth in China fell by 2% when, of course, the Global Financial Crisis was a far less serious economic problem than the pandemic.

Equally unrealistic might seem Chinese plants continuing to run hard in the event of minus 2% growth and thus such a big destocking process that would exporters, who, in January-May, enjoyed solid export numbers.

But we are in completely uncharted territory as a result of the pandemic, the floods and the biggest-ever growth in Chinese PP capacity, along with the stronger motives to run this capacity very hard.

You thus, as I said, need independent and objective data to constantly monitor how all these factors will play out during the rest of this year.