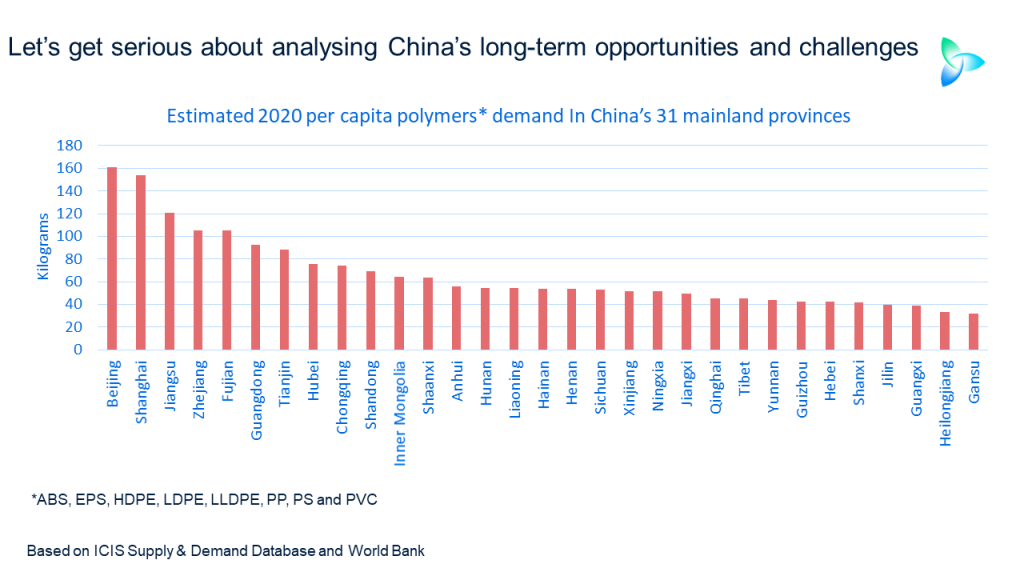 A CURSORY glance at the data from China’s Golden Week holidays, as I predicted would be the case, indicate that everything is right with the world. There were 637m domestic trips during the eight-day break, generating revenue of yuan (CNY) 466.6bn ($69.5bn), according to the Ministry of Culture and Tourism. Tourism spending was much higher than during this year’s Dragon Boat Festival.

The upbeat data, released over the weekend, came hot on the heels of very positive purchasing managers’ indices (PMI) for September, including perhaps most significantly of all last week’s release of the Caixin/Markit services PMI. Manufacturing PMIs bounced back very quickly once China brought the pandemic under control, but for several months, services PMIs, which reflect job hiring by smaller employees rather than the big state-owned giant, remained weak. Smaller, private employers account for 60% of jobs in China. The Caixin/Markit services PMI rose to rose to 54.8 in September from August’s 54.0.

But even a few minutes spent on Google provide reasons for caution. Whilst tourism was up during the Golden Week compared with the Dragon Boat festival in June, bookings for the Golden Week were still down by 30% year on year. And this is despite heroic government efforts to boost Golden Week revenues, including a “revenge tourism” publicity campaign and raising capacity at domestic tourism sites to 75% as pandemic restrictions were eased.  Golden Week revenues must also be placed into the context that people could not, of course, travel overseas.

Also, remember that China’s January-August retail sales were still down by 8.6%, despite a return to growth in year-on-year sales just for the month of August – the first positive monthly return since the pandemic. August sales were up by 0.5% year-on-year.

And remember that we must always treat official data with scepticism, especially the headline GDP numbers. All major economies, except China, constantly review quarterly GDP numbers as new data become available. But, despite China’s vast size and complexity, official quarterly GDP releases are set in stone. The official GDP number for Q3, which will be released later this month, will show a further strong rebound from the 6.8% contraction in Q1. I would not be surprised if the official number surprises analysts on the upside.

Below the headline GDP numbers lie a myriad of other concerns over the official numbers. The excellent Caixin magazine, for instance, wrote that urban unemployment, which was 5.7% in July, was defined as working less than one hour a week. But if measured by working less than 10 hours, the unemployment rate would have been twice as high. Migrant workers who had returned to the countryside after losing their jobs were also not counted, said the magazine.

This is why we need independent analysis on China’s government statistics as a sense check along with your own good people on the ground who can help you understand what is really going on.

A little time on Google results in plenty of examples of independent analysis, all free to view. Take as an example the latest survey from China Beige Book, the US-based China data research firm, which was conducted between 12 August and 13 September.

“The recovery itself is actually two-pronged, and you see the larger cities, you see the coastal regions doing much, much better than the rest of the country,” Leland Miller, CEO of China Beige Book, told CNBC.

“So, there’s really two recoveries going on – Beijing wants to advertise the Beijing, Shanghai, Guangdong type of recovery, but that’s not most of China,” he added.

The China Beige Book survey found that revenues and profits in every region of China fell by double digits in Q3 compared with a year ago. Most inland provinces saw output and domestic orders decline from the previous quarter.

This is consistent with my argument – an argument also supported by the year-on-year decline in retail sales – that the Chinese recovery is mainly production (or supply), investment and export led. This of course means that if this year’s stunning export growth were to falter, so might the recovery, unless domestic sales can finally catch up.

There are doubts over whether China would be able to boost domestic sales by enough to compensate for a sharp decline in exports. One can argue that, because of the bad debts left over by its epic 2009 stimulus programme, the government has limited wiggle room to boost local consumption.

This year’s supply, investment and export-led recovery has increased already high regional and income inequalities that could make a broad-based rebound in local spending difficult to achieve.

Some people have been celebrating another round of property inflation. But is this really good news as it has increased the gap between the rich and the majority of the population? Li Keqiang, China’s premier, said during a conference in May that 600m of China’s 1.4m population lived on a monthly income of just yuan (CNY) 1,000 ($146).

What this means for petrochemicals

This largely reflects China’s “natural hedge”. China dominates most of the major global manufacturing chains. So, whilst its exports of apparel and all the other goods associated with our old lifestyles have fallen, the declines have been more than compensated for by increases in exports of the electronics we need to convert our homes into offices. China has also dominated global supply of face masks.

There is a good chance that the stellar demand growth will continue for the rest of this year as the West,  still needs lots of facemasks – perhaps even more masks, and personal protective equipment in general, if a second wave of infections happens during the northern hemisphere winter.

It seems likely, from the evidence of the strong export order component of September’s official PMI, that exports of electronics will for the time being remain strong. Perhaps we are still some distance from the point where most people will have finished converting their homes into offices – and the point where restructured and tapered government stimulus schemes in the West harms consumer spending.

Medium and long-term outlooks are different propositions entirely, however, and you need rigorous scenario planning to take into account the potential downsides. If China’s exports were to dip, it is debatable whether the policy response would be sufficient to replace lost exports with local demand. A lot will depend on the outcome of this month’s Fifth Plenum, which takes place between 26 October and 29 October in Beijing.

The outcomes of the Fifth Plenum are at least as important as the outcomes of next month’s US presidential election in setting the direction of the global petrochemicals industry. Will China, as it sets its blueprint for its 2021-2025 plan, be able to square the circle of raising local consumption without damaging export competitiveness? Transfer too much wealth to average income earners and the export competitiveness that has been the basis of China’s “economic miracle” may be undermined; if China fails to transfer sufficient wealth, its economy will remain too heavily reliant on investment and exports.

How will China’s next five-year-plan, its 14th, deal with very worrying demographic weaknesses? A rapidly ageing population, especially in the inland provinces because of the mass migration of young people to the coastal provinces, threatens to exacerbate regional inequalities and social tensions.

But what China does internationally, as I shall discuss in a post later this week, will matter at least as much, if not more, than what it does at home. If it wins the new Great Game – the technological and geopolitical struggle with the US – it can fully compensate for domestic economic weaknesses through overseas alliances. It will be very important to observe the framework for China’s international policies that are announced during the Fifth Plenum. The Belt & Road Initiative will likely remain the main conduit for China’s international strategy.

The chart at the beginning of this blog post illustrates the extent of the challenges confronting China as it tries to raise the prosperity of the 600m Chinese living on monthly incomes of just $146 a month. Most of these people either live in inland China or live on the coast but are still registered as inland residents under the hukou residency system. This limits the remittances they can send home to their relatives.

The chart is based on the 2019 ICIS Supply & Demand Database estimates of nationwide per capita  consumption of eight major polymers measured against World Bank 2019 estimates of the per capita incomes for the 31 mainland provinces. My estimates for 2020 are based on income growth for the 31 provinces over the last ten years being repeated in 2020 and how this would affect per capita polymer consumption.

These estimates are of course wrong as there is no perfect correlation between incomes and polymer consumption. A large percentage of the polymers that China imports and produces are exported as packaging for finished goods or are used to make finished goods. But the chart does, I believe, show the right trend: a huge discrepancy between the richest Chinese provinces and the poorest provinces.

In Beijing, China’s richest province, I estimate 2020 per capita polymer consumption at 161 kilograms. This compares with just 32 kilograms in China’s poorest province, Gansu.

The chart also underlines my long-standing argument that you cannot treat China as one economy. It is instead four distinct economic zones, or groups of provinces, which are as follows:

This post further emphasises my long-standing argument that if petrochemicals companies are going to do serious analysis of China, they need to dig much deeper than the headlines and the official data. Investment and short-term trade momentum are vastly different from the medium-to-long-term shapers of the country’s economic growth. And, because China is by far the most important petrochemicals market in the world, serious analysis is essential.