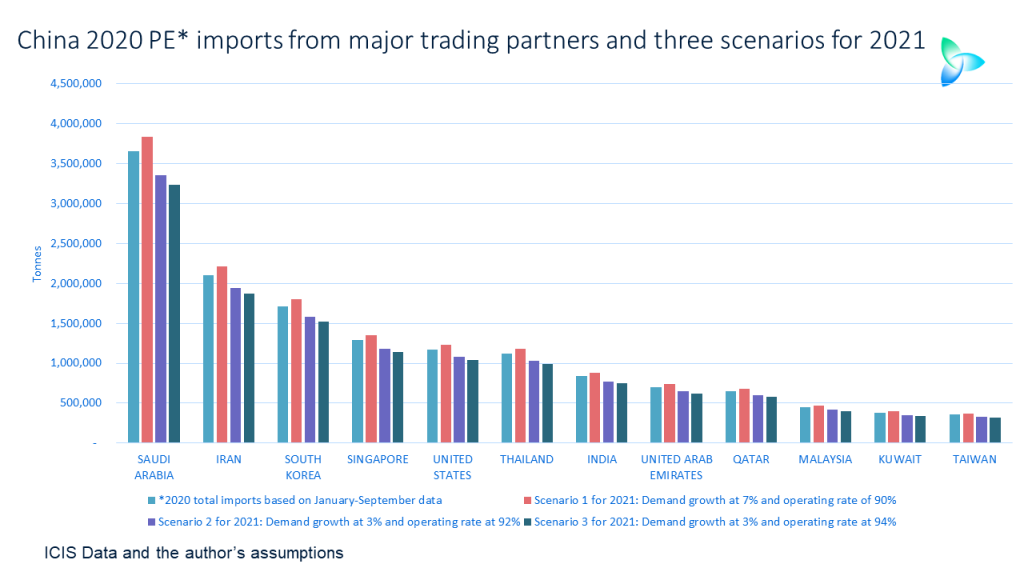 CHINA’S polyethylene (PE) imports could be at either 19.8m tonnes in 2021 or 16.8m tonnes, as I discussed on Wednesday. The above chart illustrates what effect these best- and worst-case outcomes would have on imports from China’s 12 biggest trading partners, assuming they win the same percentage market shares of the total China market as was the case in January-September this year.

This chart is worth yet another wow. China’s biggest PE trading partner is in Saudi Arabia. Under the worst-case Scenario 3, China would import 3.2m tonnes from Saudi Arabia compared with 3.8m tonnes under the best-case Scenario 1, a difference of some 600,000 tonnes when you look at the exact numbers.

China’s second biggest source of imports is Iran. Under Scenario 3, imports from Iran would next year total 1.9m tonnes versus 2.2m tonnes in Scenario 1, a difference of 340,000 tonnes when you again look at the exact numbers.

But I believe that these big differences would not be a significant deal next year as global PE demand is likely to remain robust. Demand should be strong enough to comfortably absorb extra supply.

“PE downcycle? What downcycle?” you are entitled to ask. There was a downcycle, but it only lasted for two months in Asia. In November and December 2019, southeast and northeast Asian integrated variable cost naphtha-based PE margins turned negative for the first time I can remember. But major production cuts took place in early 2020 followed by the pandemic-related surge in demand that I’ve detailed before.

PE exporters to China also look set to do better than polypropylene (PP), styrene monomer (SM), paraxylene (PX) and ethylene glycols (EG) exporters in 2021 under all scenarios. I have detailed the PP and SM stories in a previous post, will complete the picture by looking at PX on Monday and have provided my analysis on EG in the section below.

Why PE stands out, for the time being at least, is not to do with much stronger than expected demand growth in 2020, as the same applies to PP, SM, PX and EG. What is instead supporting PE imports is China’s inability to build capacity quickly enough to dramatically boost self-sufficiency whereas, in the other products, it is being more successful.

What will happen with PE imports after 2021 could be very different. China sees petrochemicals as a means of escaping a deep middle-income trap and wants to improve supply security across all products because of a very uncertain geopolitical environment. So, expect new announcements of cracker-to-PE complexes and expect the projects to go ahead.

And, whilst I see local demand growth remaining robust over the next decade, demand may increasingly be met through recycling. We will know the scale of China’s planned investments in creating a modern recycling industry over the next few months, as it discloses the details not just of its next Five-Year Plan (2021-2024) but also its economic blueprint for the next 15 years.

It seems logical to me that investments in recycling will be big because a large-scale modern recycling industry would again add value to China’s economy as it tries to escape its middle-income trap. Supply security would also be improved.

A modern recycling industry would help fulfil the government’s promise to clean up the environment, as would enforcing plans for heavy restrictions and bans on single-use plastics. Walking the talk on plastic waste would improve China’s international standing and would go hand-in-hand with China’s plan to be carbon neutral by 2060.

The big shift in EG starts from next year 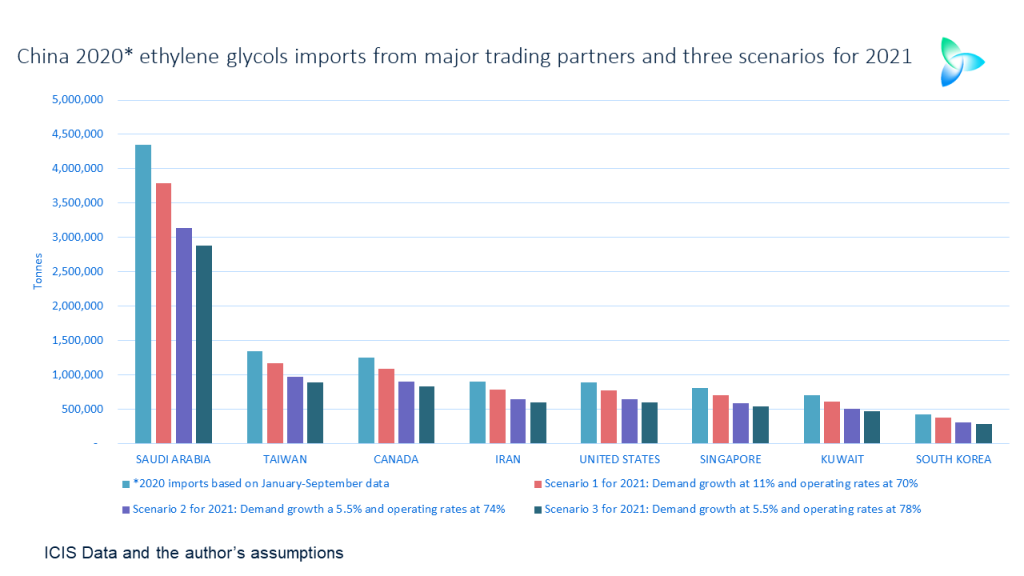 China will account for 87% of the 2020 total global net imports in EG, according to the ICIS Supply & Demand Database. So, the big changes taking place in China’s EG supply from next year onwards will cause major disruptions to the global industry.

Demand isn’t, as I said earlier, a problem. We had expected China’s EG demand to decline by 1% in 2020 over last year to 17.5m tonnes. But our January-September data on apparent demand (net imports plus local production) points to an 11% increase. If this were to be repeated during the full-year 2020, this year’s demand would reach 19.5m tonnes.

Maybe 11% reflects quite a lot of overstocking. But it is clear that EG demand has been much better than just about anybody had expected in March, when China was in the midst of the pandemic. EG consumption into polyester has been supported by a solid recovery in the local economy and a clever economic plan that led China to gain bigger shares in export markets.

China’s clothing, pillowcase and bedsheet factories were boosted by cheap raw materials and export tax breaks. EG demand also seems to have benefited from China’s dominance in the global face mask market. Face masks are made from PP non-wovens and polyester.

Under my Scenario 1 for 2021, I assume 11% demand growth continues in 2020 with local operating rates at 70%, the same as in 2019. But with local capacity set to increase by 13% next year, this would result in EG imports totalling 10m tonnes as against what could be a total 11.5m tonnes in 2020. This assumes that the level of imports we saw in January-September 2020 is maintained over the full year.

The estimates in the above EG chart are again based on China’s EG trading partners winning the same percentage shares of the total China market in 2021 as has been the case in 2020.

I will discuss this theme in much more detail on Monday. But, in short here, petrochemicals exporters to China need new business models. Some plants may well have to be shut down, and/or surplus SM and PP etc will have to be turned into higher-value derivatives.

Japanese, Malaysian, Singaporean, South Korean and Thai exporters to China will however have the opportunity to gain bigger shares in diminishing markets because, along with China, they are members of the Regional Economic Comprehensive Partnership (RCEP) trade deal that was signed earlier this month.

Harmonisation of rules of origin, an important element of the RCEP, will lower tariff barriers for Chinese petrochemicals importers who buy from member countries, provided their re-exports of finished goods go to member countries. This places India, the Middle East and Taiwan, which are not in the RCEP, at a disadvantage.

But still, the scale of the rise in China’s self-sufficiency across a broad range of petrochemicals will force even RCEP members to make some painful and difficult decisions.

For those who have been paying attention, nothing about China’s increasing self-sufficiency should come as a surprise. China clearly signalled that this was its intention in 2014. When China’s government makes a decision, the decision is very often implemented.

PREVIOUS POST China's PE imports in 2021 could be as high as 19.8m tonnes or as low as 16.8m tonnes
NEXT POST Exporters of PP and SM to China seem to have options other than shutdowns, but not PX exporters