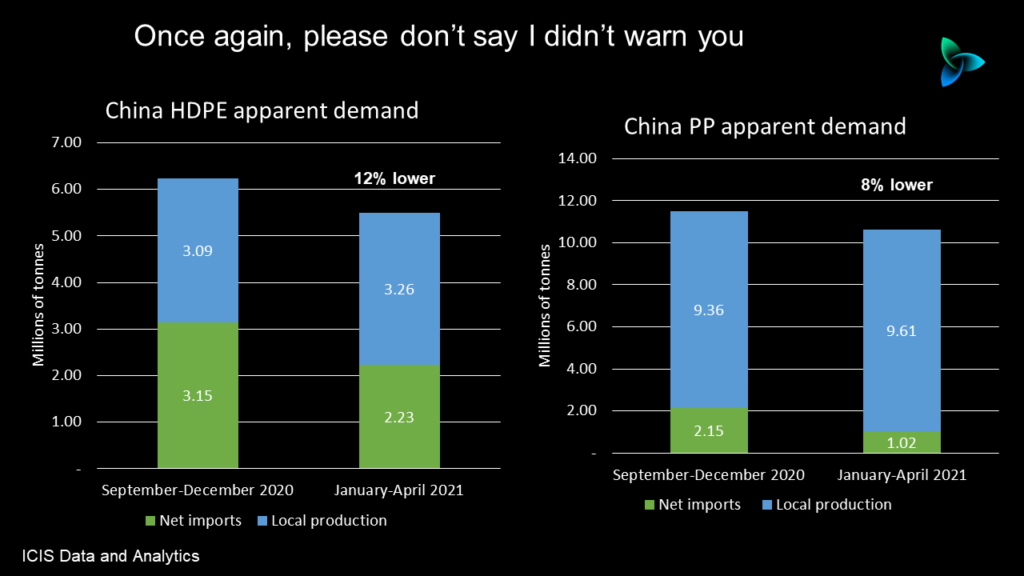 Month-on-month or quarter-on-quarter comparisons in general enable us to assess whether the strong economic growth China saw from May onwards last year was fully carried over into 2021.

The answer  was quite clearly” no” for January-April as petrochemicals data is a very good guide to the overall pace of economic expansion.

A breakdown of the latest HDPE data indicates a 29% fall in January-April 2021 net imports (imports minus exports) to around 2.2m tonnes and a 5% rise in local production to 3.3m tonnes. This is again compared with September-December 2020.

Net imports are added to local production to get to apparent demand. Import and export data is from the China Customs department with domestic production assessed by ICIS.

As very little HDPE is exported by China, most of the change in trade flows represented a decline in just imports. Imports were 27% lower at 2.2m tonnes.

Analysis of the most recent retail sales data shows local spending has yet to return to pre-pandemic levels.

Beijing also seems intent on tackling excessive leverage. Total social financing was down by 8% in Q1 this year.

The government is trying to further rein-in lending via the shadow or private banks in favour of credit from the big state-owned lenders. Shadow lending tends to be highly speculative.

Some of the air is being taken out of the property bubble as Beijing also attempts to reduce lending to local governments. Local government debt is seen as a potential systemic problem.

But the government might change course if GDP growth looks as if it won’t comfortably reach the official target of a 2021 increase of around 6%.

Very low Chinese HDPE prices versus other regions seemed to be the result of this moderate economic slowdown.

The other reason why Chinese prices have been comparatively low is an increase in domestic HDPE self-sufficiency. Greater self-sufficiency also obviously explains rising production and falling imports.

If the same patterns of demand and imports in January-April were to continue for the rest of 2021, this year’s imports would total 6.7m tonnes, 26% lower than 2o2o’s 9.1m tonnes.

The final outcome, though, might be worse for overseas suppliers as most of China’s new HDPE capacity comes onstream in H2.

We also estimated local operating rates at only 81% in January-April as against our prediction for the full year of 89%.

As with HDPE, China’s PP prices have been much lower than in many other countries during the last three months.

Overall exports in January-April this year surged by 397% over September-December 2020 to 609,864 tonnes. This  explains the spectacular 53% fall in net imports to 1m tonnes when the two four-month periods are again compared.

The surge in exports is evidence that Chinese traders and producers took advantage of much better netbacks in overseas markets.

As with HDPE, comparatively low Chinese PP prices were partly the result of the moderate slowdown in the Chinese economy.

January-April 2021 PP imports were also sharply lower. Compared with September-December 2020, they declined by 24%  to 1.6m.

I believe China will run its petrochemicals plants in general at high rates in 2021 and beyond, almost regardless of cost-per-tonne economics. High levels of production will be for supply security and economic value-addition reasons.

Let us assume our base case operating rate for PP is right. Capacity utilisation of 86% over capacity of 35.5m tonnes/year in 2021 would equal production of around 30m tonnes.

PLEASE DON’T SAY I DIDN’T WARN YOU. I have been warning of a steep decline in Chinese petrochemical imports since 2014.

Declines in PP and HDPE imports in 2021 and beyond would represent major challenges for Middle East, southeast Asia, northeast Asia ex-China and US producers.

Producers in these same regions may also have to contend with steep falls in styrene monomer, paraxylene and ethylene glycols imports.

But the opportunities for buyers are huge if we move from a world of petrochemicals inflation to one of deflation. I think we are heading towards deflation.

Whatever actually happens, the ride will not be smooth. Buckle your belts, hold on and keep monitoring the ICIS data.

PREVIOUS POST Demographics are reshaping petrochemicals trade flows, investment patterns and demand
NEXT POST We can solve the plastic waste crisis but we don't have much time