NOW we must be very careful here. Time and time again, Chinese polyolefins growth has defied the doom mongers.

Just look at 2015 as a prime example, when, despite a mild economic downturn, polyethylene (PE) and polypropylene (PP) consumption growth surprised on the upside, largely because of a surge in internet sales.

The huge volumes of packaging (forget the sustainability concerns!) that go into any item sold on the internet anywhere guarantees strong growth as people migrate more and more to buying online. This is regardless of what happens to GDP in any country.

China has become one of the most, if not the most, wired countries in the world.

Two annual events – when online purchases go through the roof – have yet to happen this year: The Golden Week holidays between 1 and 7 October and the Single’s Day shopping bonanza that occurs on 11 November.

But while, as I said, we need to be very careful here about being pessimistic, the chart below should be a cause for concern. 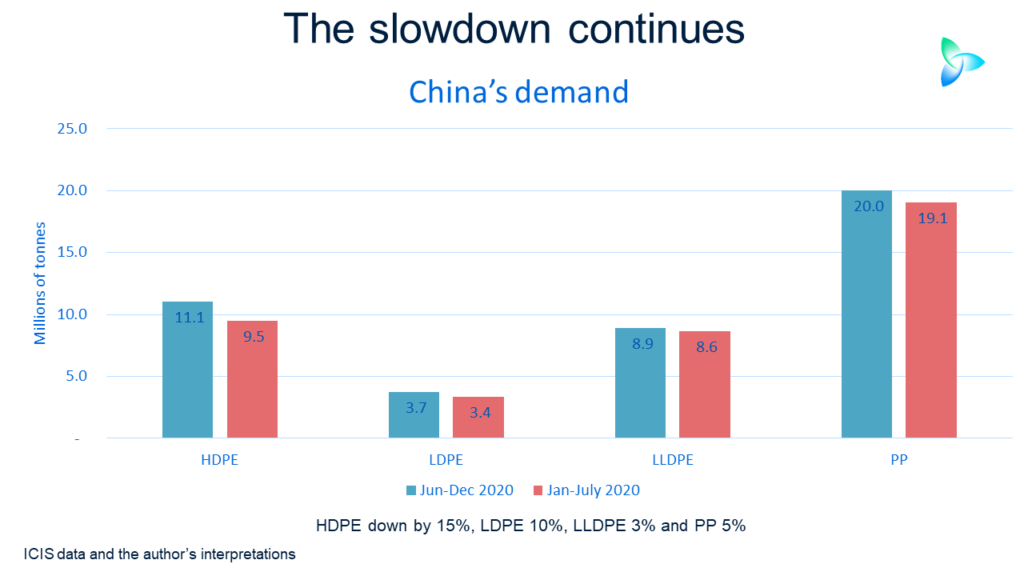 While, as I discussed last week, PP demand improved a little in January-July 2021 versus January-June 2021, it remained as weak for PE.

Let us next consider what the January-July trends would mean if they continued for the full year, when measured against our base case estimates for 2021 demand. 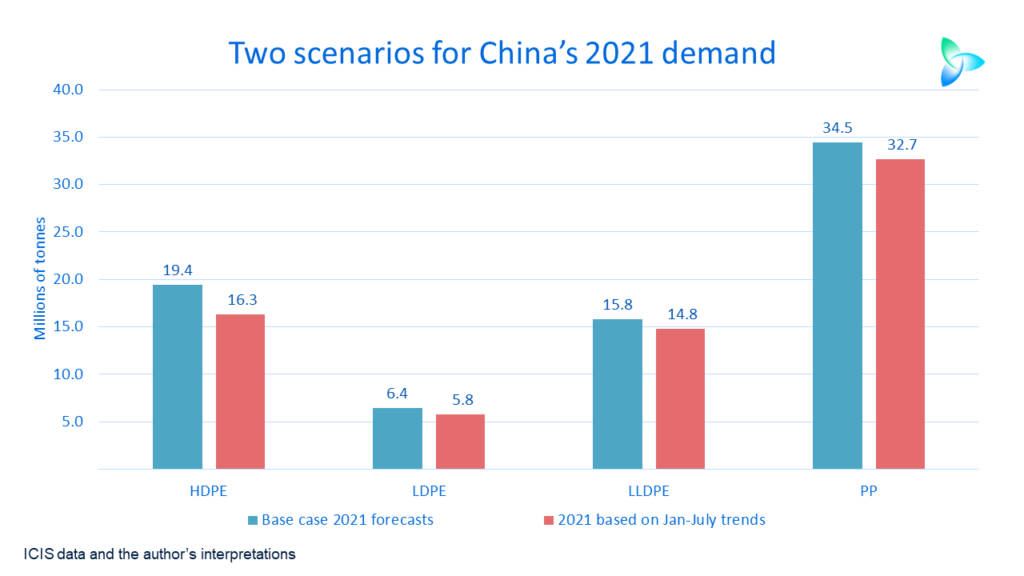 But we must remember that 2020 was a bubble year. As the chart below reminds us, relative to 2019 there’s nothing to be especially disappointed about.

China’s growth appears to be moderating back to its longer-term more moderate trend. When I say moderate, though, growth in 2021 versus 2019 would still be spectacular compared with anywhere else in the world. 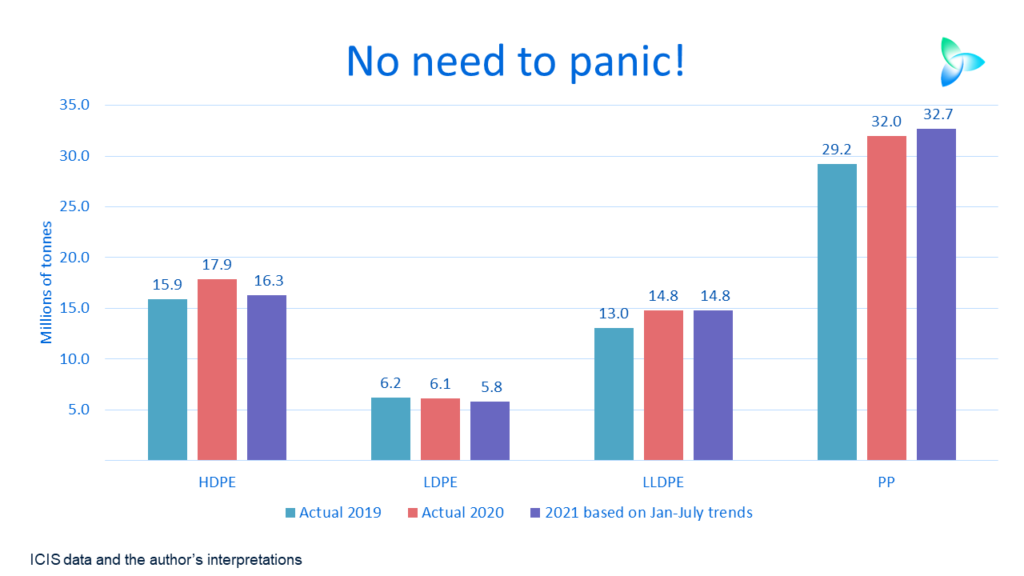 Whereas, as the above slide says, there is no need to panic about demand, exporters should be constructively panicking a little as they look for alternative markets to China.  The chart below indicates what the January-July trends would mean for annual 2021 imports versus last year. 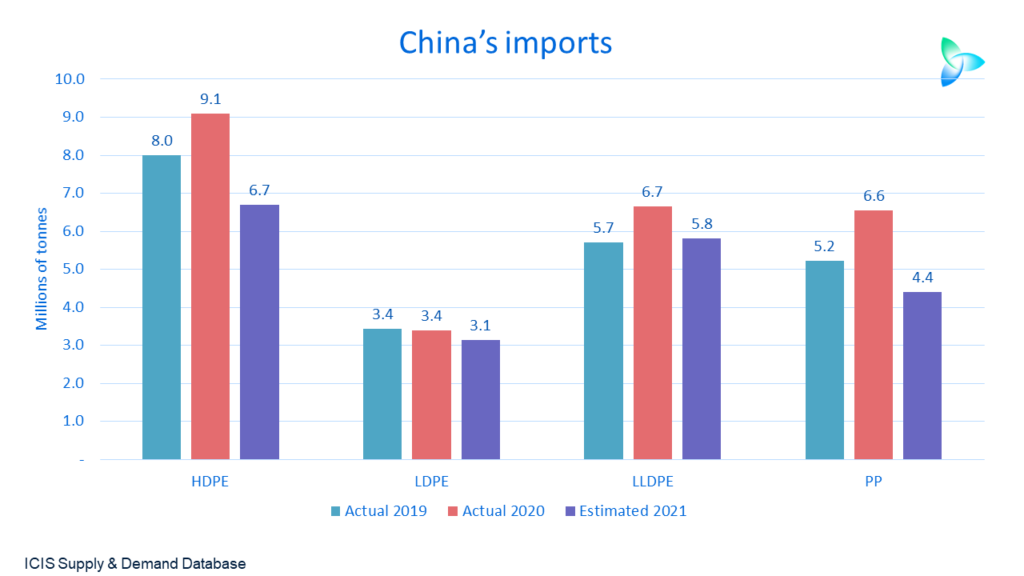 Finding alternative markets to China is easier to do in PP than in PE. China accounted for an estimated 43% of global net PP imports in 2020 versus 69% in PE. This was amongst the countries and regions that exported more than they imported.

The chart on imports again provides the important context of 2019, reconfirming that 2020 was a bubble year – the “China in, China out” story as polyolefins imports surged in order to make package or make finished goods which were then re-exported.

China’s ability to meet the lockdown needs of the developed world led to its strong export-led recovery in H2 last year. This delayed the impact of rising self-sufficiency. PP imports in 2020 over 2019 increased by 26% with PE imports an average 12% higher across the three grades.

But now, with substantial further new capacity coming onstream this year – and with demand growth looking likely to be below expectations – the above chart implies the following:

China is likely to run its new coastal steam cracker, refinery and propane-dehydrogenation polyolefin plants hard regardless of market conditions because of strong cost per tonne positions and because it wants to replace imports.

Most of the new capacity is via the above three routes rather than coal-based, where rate cuts are much more probable in the event of demand remaining as weak for the rest of the year as in January-July 2021.

In other words, in the event of demand staying weak don’t bank on local rate cuts significantly boosting imports and providing support for Asian pricing which remains very, very cheap versus the western hemisphere.

Back to demand. What we need to assess is the extent to which continued weakness in exports of manufactured goods would discount the seasonal support to local polyolefins demand that will be provided by Golden Week and Single’s Day.

Why might exports remain weak? Look at this quite stunning chart below for your explanation from Freightos, the online freight marketplace and excellent data provider.

China is entering its peak manufacturing season when it ramps up production of finished goods for exports to the West in time for Christmas – and, of course, North America is a major market for China’s exports.

The slightly good news was that on the Asia-to-Europe, Freightos data tell us that the lower end of 40—foot container costs was just over $12,000 on 23 August, unchanged from 2 August. But this still compared with less than $2,000 as recently as July 2020.

China seems set to struggle to fulfil orders for Christmas if the freight and semiconductor crises continue. The shortage of semiconductors is another reason for the slowdown in Chinese polyolefins demand during 2021.

As for polyolefins themselves, the higher freight rates will make it harder for Asian producers to relieve the region’s oversupply by taking advantage of much better pricing in the western hemisphere.

This Voice of America article provides a good summary of why the freight crisis isn’t going to be resolved anytime soon. Freightos warns of no resolution until at least the middle of next year. And as this ICIS article says, the semiconductor shortage rumbles on – probably into next year as well.

At the risk of being boring, to repeat, this therefore comes back to how stronger H2 local consumption of polyolefins will compensate for what looks set to be continued logistics-related delays to China’s exports of finished goods.

If you want definitive estimates of the balance between these opposing forces, good luck with that. As I have been arguing for ten years, the petrochemical industry’s data on China remains wholly inadequate.

Part of the problem is that we collectively shrug our shoulders and say that because China is so vast and complex, the numbers we have will have to do. I my view, we must try harder.

But where I can help you is with this piece of advice: build a scenario around the January-July demand and import trends continuing and construct a sales, marketing and export sales plan around this scenario. Perhaps on this occasion, what might seem like pessimism could instead be realism.