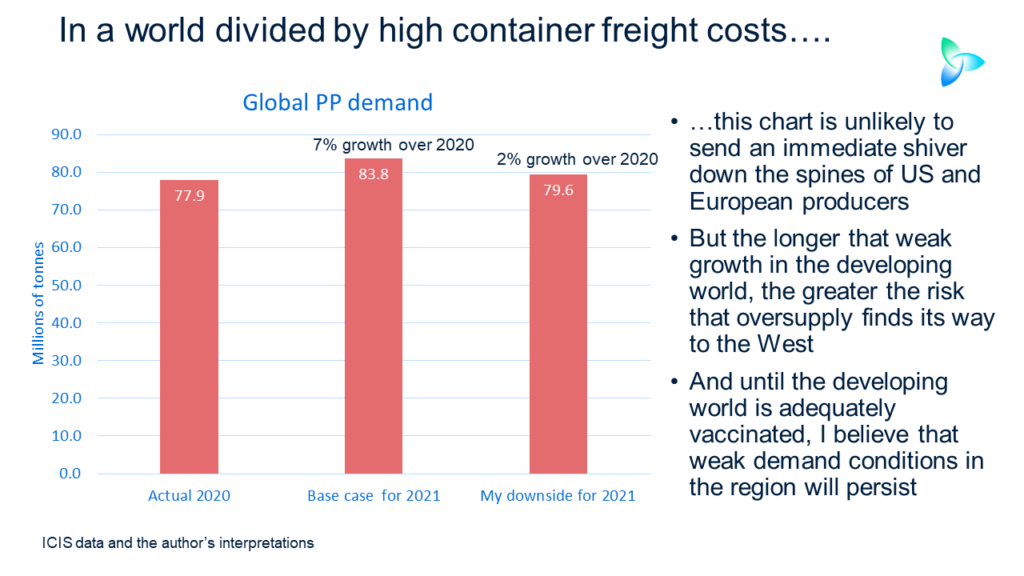 IN NORMAL CIRCUMSTANCES the above chart – which shows our base case for global polypropylene (PP) demand in 2021 versus my downside for this year – would be extremely significant.

If anything like the weaker growth I envisage for this year were to materialise, the whole world would be pushed into significant oversupply as excess material moved seamlessly between regions. Either that or global operating rate cuts would bring the market back into balance.

But these are from normal circumstances. Extremely high container freight costs for moving PP from Asia – where the oversupply is centred – westwards to where PP markets are very tight means that the oversupply is trapped in Asia.

Very expensive container freight could easily last into 2022. There is an argument to be made, which I buy into, that until or unless the world is adequately vaccinated, volatility in container pricing is here to stay, even if we don’t continue to see prices as elevated as they are today (see the slide below). 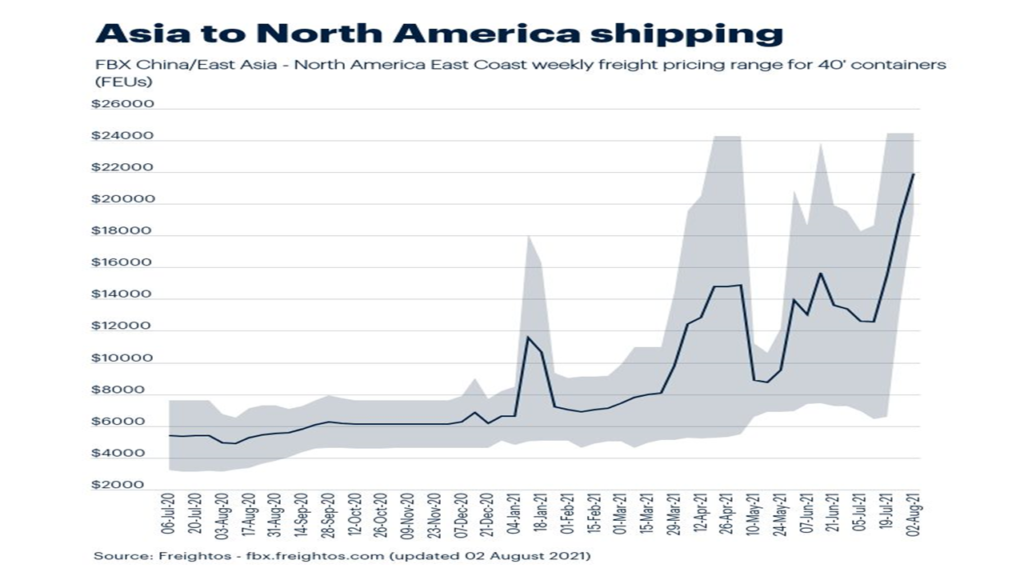 The argument for volatility is that unless we achieve an adequate global vaccination level, the risk of further port disruptions will remain due to outbreaks in the developing world that spread elsewhere.

Vaccination rates in the developing world remain extremely low, as the chart below from Our World in Data reminds us. 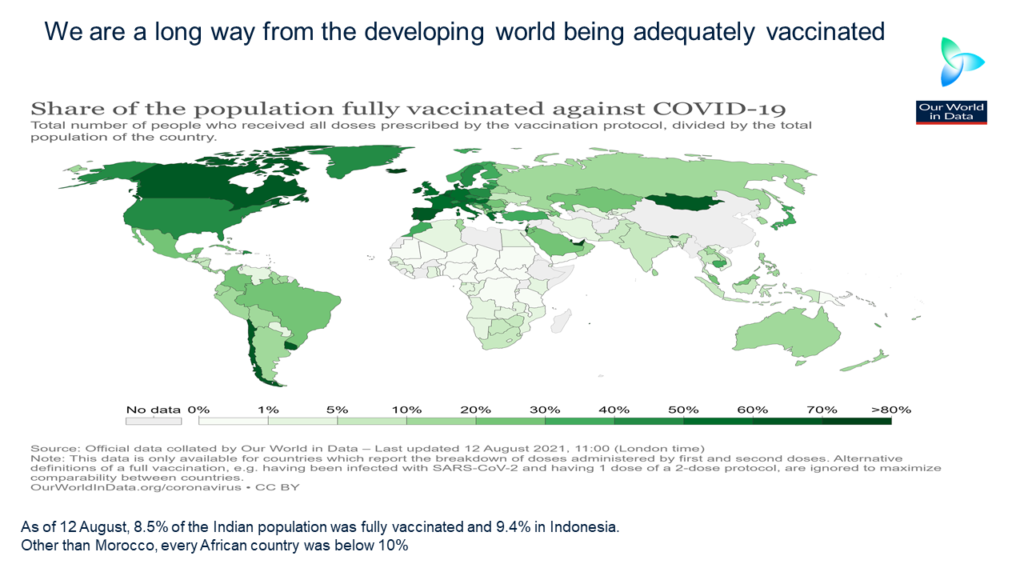 When container costs are extremely volatile then of course sellers and buyers can be reluctant to commit to deals.

Now let me explain the logic behind my estimate for downside global PP demand in 2021. The downside mainly relates to my reading of events in developing world.

The extreme poverty and middle-income effects

I believe that the lack of adequate vaccination levels in the developing world isn’t just a reason to expect continued volatility in the container freight market.

Until or unless the developing world hits a vaccination level that brings the pandemic under control, weak PP and other petrochemical demand will, in my view, persist across the region.

I see vaccinations as effective in preventing the worst symptoms of the pandemic, reducing the number of people who need hospital treatment. This is so, so important for poorer countries that quite often have weak healthcare systems.

Because of the combination of low vaccination rates and weak healthcare systems, strict lockdown measures are viewed as essential by many governments in the developing world.

Lockdown measures have been stepped up countries such as Vietnam and Malaysia over the last few weeks due to the spread of the Delta variant.

Unlike the developed world where lockdowns boost PP and other petrochemicals demand, the opposite effect occurs in poorer countries.

Hundreds of millions of “day-rate labourers” don’t obviously get paid when economies are largely shut down, and day-rate labourers make up most of the workforces in many developing countries.

And as long as the pandemic is out of control in poorer countries, the greater the number of people who will be pushed back into extreme poverty or denied the opportunity of escaping extreme poverty, defined by the World Bank as living on less than $1.90 a day.

When you are living on less than $1.90 a day, even the most basic of modern-day consumer goods such as a bottle of shampoo is beyond your means. The fewer the sales of bottles of shampoo in Africa the lower the PP demand.

The other result of the developing world’s vaccination crisis is the millions of people, who, while safe from the risk of falling into extreme poverty, will be denied the chance of achieving middle-income status.

On this basis, therefore, I question whether our base case assumptions concerning developing world PP demand growth in 202I will come true.

Focusing first on 2020, the ICIS Supply & Demand Database estimates that demand in Africa, the Middle East and the Former Soviet Union fell by 2% over 2019. We assess that Asia and Pacific demand, excluding the fully developed economies of Australia, New Zealand and Singapore, was down by 4%.

We saw South & Central American growth at a positive 5%, whereas Mexican demand was estimated as having declined by 2%.

This year, however, we assume African growth rebounds by 9%, the Middle East by 5%, the Former Soviet Union by 8% and developing Asia and Pacific by 11%. Mexico is estimated to see growth of 4%.

I instead assume as part of my downside that all the above countries and regions see percentage declines in 2021 the same as those in 2020.

Also included in these assumptions are my earlier estimates for weaker-than-expected growth in southeast Asia, which other than Singapore, comprises developing economies

China: the elephant in the corner of the room

Last year, China’s share of global PP demand was around 40%, up from just 12% in 2020. Whatever happens in China this year will therefore have a huge bearing on global demand.

China’s petrochemicals demand in general declined in H1 2021 versus the second half of last year, which is the only relevant measure as year-on-year comparisons are misleading. In PP, H1 2021 demand was down by 6% over H2 2020, according to ICIS data.

This is where we need to circle back to the container freight crisis. A credible explanation for why China’s exports of manufactured goods fell by 20% in H1 2021, again versus H2 2020, were shortages both of containers and semiconductors.

The slowdown in exports was a major reason for the decline in petrochemicals demand growth in H1.

Demand isn’t the problem in the developed world

Chinese growth has, however, frequently surprised on the upside so we might see a big rebound in Chinese demand in H2.

One reason to believe this might happen is that H2 consumption in most years is normally better than H1 because of China’s peak manufacturing season in August-September, when its factories run hard to meet Christmas demand for finished goods in the West.

The container and semiconductor shortages might, however, lead to a muted peak manufacturing season in 2021. But H2 also sees two major domestic spending events – Golden Week in October and Single’s Day in November.

I cannot see a reason why developing world demand outside China (China isn’t really a typical developing economy) won’t be more or less in line with my downside expectations.

As far as the developed world is concerned, I am sticking with our base case forecasts: a 5% demand increase in the US and Canada versus 2020, a 7% rise in Europe, an 8% increase in northeast Asia other than mainland China (Japan, South Korea and Taiwan) and a 4% increase in the developed economies in Asia and Pacific – Australia, New Zealand and Singapore.

This reflects my view that developed world demand fundamentals are very different because of low government borrowing costs and cash-rich middle classes able to maintain high levels of spending, regardless of the progression of the virus.

A further factor supporting both PP and polyethylene (PE) demand in the developed world plus China is booming internet sales. Internet sales require a lot of PP and PE packaging to get goods to customers in one piece.

But still, the overall picture for PP demand – and for PE demand as I shall detail in later posts – looks nowhere near as rosy as it did just a few months ago.

As I have just detailed, this is because of the problems in the developing world that could well drag on into next year and the potential for significantly lower-than-expected growth in China – the result of the supply chain limits to exports

And don’t forget the other aspect of this story: big 2021 increases in Asian PP capacity in China, South Korea and possibly also in Malaysia.

Right now, as I said earlier, PP markets in the Western hemisphere are exceptionally tight, meaning that the slide at the start of this post is unlikely to send shivers down the spines of US and European producers.

But the longer this divided world continues, the greater the risk that oversupply in Asia will find its way westwards. Keep a close eye on the freight rates!