Home Blogs Chemicals and the Economy Don’t look down 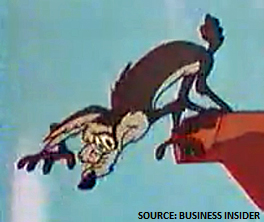 Governments and central banks never spot recessions till it is too late.  Thus after the 2008 Crisis, for example, it was recognised that only a few independent experts such as the blog had forewarned of the danger.

Today’s situation seems potentially to be as serious as in 2008.  Therefore as promised yesterday, the blog has decided to present its own analysis of the current position in a special series.

One key area to watch is the potential impact of developments in China.  If the 1993 parallel remains true, we may well see the world’s 2nd largest economy move temporarily from high to negative economic growth.  A second area is the Eurozone, where the worsening economy has been ignored for the past year, in order not to frighten German voters in advance of September’s election.

Another, as we were reminded in 2008, is the impact of inventory changes.  When growth speeds up after a slowdown, as it did from 2009, companies begin to buy forward in order to meet potential orders.  This change in the inventory cycle in itself creates temporary shortages, as suppliers had earlier cut output due to lack of demand.

The post-2009 cycle was also, of course, turbo-charged by the $33tn of stimulus provided by the major central banks/government.  This led companies to plan major new capacity increases in the belief that the recovery would reveal plenty of ‘pent-up demand’ from the earlier downturn.  And this new capacity is now starting to come online

However, it is becoming increasingly clear there is no ‘pent-up demand’, as the global economy is instead slowing as it moves into the New Normal.  Equally, the asset bubbles created by the central banks around the globe are now starting to burst one-by-one.  Cotton, copper, gold and others have all seen sharp price falls recently.   In turn, this increases the danger in other markets, as confused investors flock to invest in the remaining bubbles.

This example of the ‘last-man-standing’ concept has caused these final bubbles such as the US S&P 500 Index and crude oil markets to go into melt-up stage.  But this only delays the outcome whilst increasing the likely potential severity of the burst for these remaining bubbles, as the blog will discuss tomorrow.  But whilst they last, these bubbles have created the illusion of strong demand driving higher earnings and oil prices.

In reality, the blog fears, we are in the position of the Wile E Coyote character (pictured) in the Roadrunner cartoon.  When he looks down, he finds his feet are no longer running on firm ground.