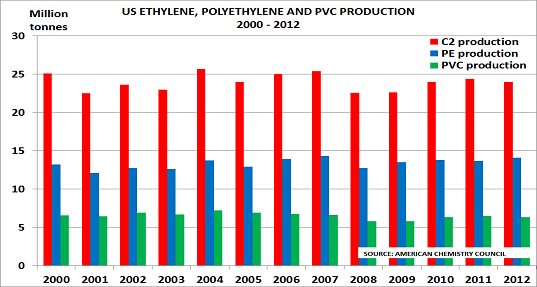 The above chart paints a depressing picture for anyone thinking it should be easy to make money via a major US ethylene investment based on cheap ethane from shale gas.   It shows 2012 ethylene production (red column) was still below SuperCycle levels, as were volumes for the two major derivatives – polyethylene (blue) and PVC (green).  It highlights how lack of demand will make it very difficult to justify all the currently planned expansions.

Thus ethylene output in 2012 was 24MT versus a peak at 25.7MT in 2004; PE output was 14.1MT versus 14.3MT in 2007, and PVC output was 6.3MT versus 7.3MT in 2004.  Equally, trade data from Global Trade Information Services suggests that export markets are unlikely to provide sufficient volume to justify the planned new capacity.  Net US PE exports have actually fallen by 1MT since 2009, whilst PVC exports are already over 40% of domestic output.  (The logistic costs of moving ethylene itself are too expensive to allow large volumes of exports).

This, of course, is an almost unbelievable message for any executive who moved into senior management during the later years of the 1983-2007 SuperCycle.  Then demand was rising on a constant basis and planning was based on the theme from the baseball movie ‘Field of Dreams’ that “if you build it, they will come”.

But today, in the New Normal of slow and uncertain demand growth, the situation has reversed.  The US has had a major feedstock advantage versus oil-based producers since 2009, and its ethane costs have been back at pre-2003 levels for over a year.  Yet it is has been unable to set new production records for any of the key products.

How then will it manage to sell the 10 million tonnes of potential new capacity that is currently being planned?

The would appear to be only 3 possible developments that would enable producers to place such a volume:

The first option seems unrealistic, as domestic markets remain very slow despite the $tns of government stimulus.  Certainly it would be a brave Board that sanctioned major new investment on the basis of such wishful thinking.

The second option is equally unlikely, as growth is slowing in all major export markets.  In fact, as the Wall Street Journal noted recently, “the advanced economies, including Japan, the U.S. and Europe, together are contributing more to growth in the $74 trillion global economy than the emerging nations“.

So that leaves just the third option, of forcing the closure of domestic production in key export markets.  In theory, this might seem possible.  And the blog has had many discussions on this theme with enthusiastic investors, who imagine that a quick trip to China, followed by a whistle-stop tour of NE Asia and Europe, will quickly produce the right result:

This leaves only two possible fall-back strategies, neither terribly attractive:

Shale gas thus provides a high-profile example of the New Normal in action.  The sad truth is that demand is no longer ‘guaranteed’ to rise in order to allow a low-cost supply position to be monetised.  And without guaranteed demand, many of today’s planned ethylene expansions may find it difficult to gain final Board approval.