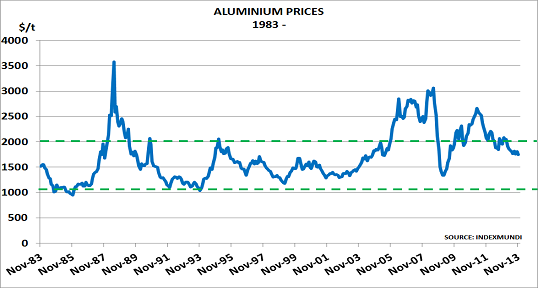 We all know that strange things have been happening in global commodity markets in the past 5 years.  Central banks have been pumping out free cash, which has been used to fund speculative trading by many of the major investment banks.  In turn this has taken many prices to new records.  And this was all happening when demand growth was weak, whilst supply was increasing rapidly due to the higher prices.

One key development in metals markets was the purchase from 2010 of warehouse capacity by companies such as Goldman Sachs and JP Morgan.  They found a loophole in the rules for the London Metal Exchange (LME), whereby they only had to actually deliver product to buyers after a long wait.  This provided them with sharply higher income from storage charges, as buyers often had to wait over a year for the product.  And it also meant the product could be tied up in futures contracts, forcing market prices higher.

Aluminium has been an excellent example of this trend in action.  It is critically important to the chloralkali industry as an outlet for caustic soda, and the blog thus keeps a careful eye on developments:

The LME rules are now changing, but the profitability of this game has been so large that it seems the major players are reluctant to admit defeat.  5 companies now own 75% of the LME’s warehouses, and they all now own shadow warehouses as well.

Between them, they have created a paradigm shift in stock levels.  Stocks were at normal levels of 1.5MT in early 2008, but now seem to be around 10 times higher:

This explosion in stocks has created strong demand for caustic soda in the short-term.  But in the end, this supply will have to come back on the market.

And as the WSJ notes, the lack of transparency over inventories means the market is no longer performing its role of price discovery.   Instead, prices have remained firm whilst stock levels increased.

Thus the risk of a price crash must be rising day by day.