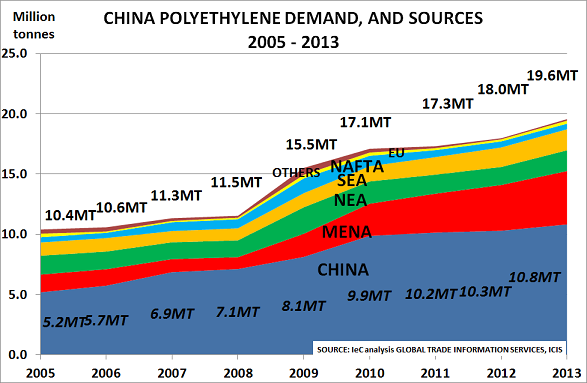 China’s growth has been the main support for the global economy since the Crisis began in Q4 2008.  The slide above captures the extent of this in polyethylene (PE), one of the world’s largest chemical markets, based on data from China’s chemical association and Global Trade Information Services:

This is clearly a completely unsustainable level of growth for a mature product such as PE, invented back in 1933.

There is no need here to go through the reasons for this sudden development, as we know it has been due to the lending bubble.  The more interesting issue is to understand where we are today:

Some investors with whom the blog talks find this business model very hard to understand.  They imagine that China’s communist government operates on the basis of cost curves and production economics.  But reality is much simpler – the government knows it will stay in power as long as long as living standards continue to increase.  Hence it expands domestic employment to create jobs, and reduces imports to a minimum.

It also takes a strategic view of the imports it does buy.  The sudden doubling of lending in 2009 meant it took product from everywhere, but since then it has become much more selective:

Critically important, however, is that all other regions have seen a decline in volumes since 2009:

These statistics seem to provide a fairly clear message about China’s market:

This raises two questions for the future.  The first is whether the lending bubble will continue?  The second is whether China will continue to focus on maximising its own production and on only importing selectively from favoured regions?

Neither of these questions give comfortable answers for current exporters, or for those planning to expand capacity.

The new leadership seems set on reducing lending and rebalancing the economy away from infrastructure spend and real estate.  It therefore seems likely that net imports will fall over the next few years, and that the focus for these will remain on strategic partners in ME/SEA.  At the same time, exports will probably continue to rise, despite the negative cost position, as the government seeks to maintain employment.

These answers may not fit with some current company strategies.  But the trends in the data seem clear.  The blog would certainly not therefore invest its own money in any PE expansions based on the potential for increased sales to China, no matter how large the cost advantage appeared to be.