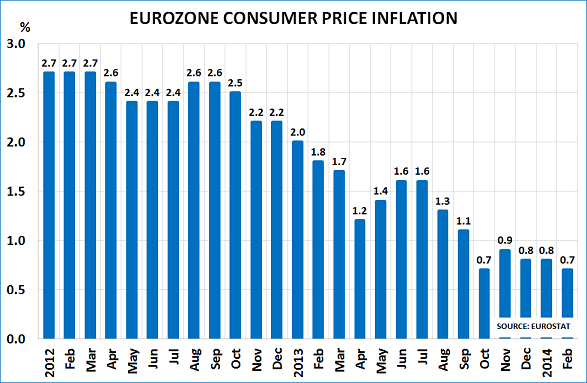 A major debate is underway in Eurozone financial markets about the imminent approach of deflation.  As the chart above shows, Eurozone inflation has ben falling steadily for the past 2 years.  Yet most still fail to recognise that today’s demographics make this development more or less inevitable.  The Financial Times has kindly printed  the blog’s letter below, which hopes to make this argument better understood.

Sir, I was left baffled by Martin Wolf’s argument that eurozone policy makers should seek to wave a magic wand to avoid the onset of deflation (“The spectre of eurozone deflation”, March 12). After all, as he himself has noted, you “can’t print babies”.

Demographics drive demand. And eurozone fertility rates have been falling for 40 years, since the baby boom ended. Today, they remain well below the 2.1 level required to replace the population. Equally, increasing life expectancy means that most people no longer die before pension age, but can instead hope to live for another decade or more. As a result, the proportion of those in the over-55 age group is now increasing rapidly, for the first time in history. In Germany, for example, more than a third of the adult population aged over 20 are already in this cohort, and their proportion will reach 50 per cent by 2030.

Policy makers can do little to reverse this deflationary trend, given that household spending is 60 per cent or more of gross domestic product. Common sense as well as government data confirm that this spending inevitably declines beyond the age of 55. People already own most of what they need, while their incomes reduce as they enter retirement. It is also hard to see why they should try. Deflation rewards prudent people with savings, while causing problems for those who cannot pay their debts. Is this not exactly what central bank policy should aim to achieve?

In addition, deflation will help to create a more sustainable world, as people pay down debt instead of borrowing to buy the latest “new, new thing”.

PREVIOUS POST China's electricity consumption shows growth at 4.5% and slowing
NEXT POST US ethylene boom is a dangerous game