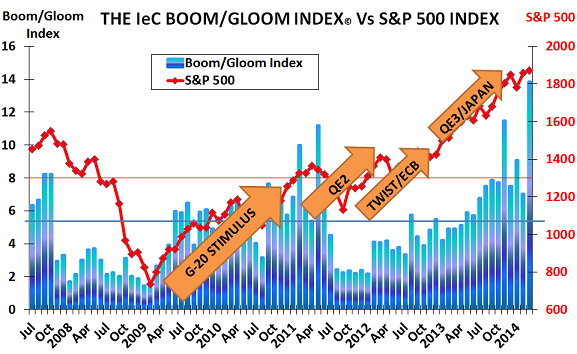 So, here we are again.  Each year it seems to take less and less time for the US Federal Reserve to give up on its confident New Year forecasts of economic recovery.

New Fed Chair, Janet Yellen, argued in February that the weather was responsible for the economy’s poor performance.  But now she seems to have decided the problems go beyond the ‘polar vortex’ that saw record snowfalls in many parts of the USA.  This, of course, will be no surprise to blog readers.  Its view at the time was that the weather excuse was equivalent to a school student claiming that ‘the dog ate my homework’.

Yellen is of course right when she noted in her Monday speech that:

“While there has been steady progress, there is also no doubt that the economy and the job market are not back to normal health.  The recovery still feels like a recession to many Americans, and it also looks that way in some economic statistics.”

But worryingly, she is still a long way from understanding that the Fed is making the situation worse, not better, by ignoring the demographic causes of today’s slowing economy.

Instead she made it clear on Monday that the end of her hopes for a quick recovery would lead to yet more stimulus support for financial markets.  Yet as Barron’s, the US investment magazine notes, the main impact of the Fed’s policies has been to boost company hand-outs to shareholders to near-record levels:

“Combined, share repurchases plus dividends reached $214.4 billion in the fourth quarter, the second-highest total on record after $233.2 billion in 2007’s fourth quarter. For all of last year, buybacks increased 19.2%, to $475.6 billion, equalling the average stock-price rise, which means it took that many more bucks to buy pricier shares”

Unsurprisingly, therefore, the IeC Boom/Gloom Index has soared as Yellen’s about-face has taken place.  It is the best measure of financial market sentiment and as the chart shows:

So it looks as though we are now back in the familiar pattern of the past 5 years.  The Fed encourages companies to focus on boosting profits in the short-term, and on handing back money to their wealthy shareholders.  This does little for the real economy, as most Americans don’t have 401(k)-type stock market investments, but instead depend on Social Security for retirement income.

Then next winter, the Fed will again come out with confident predictions that ‘this time, recovery really is underway’.