Home Blogs Chemicals and the Economy The tide of global debt has peaked: 8 charts suggest what may happen next, as the tide retreats

The results of the central bankers’ great experiment with money printing are now in, and they are fairly depressing, as the charts above confirm:

As the IMF headlined last week, “current favorable growth rates will not last”. 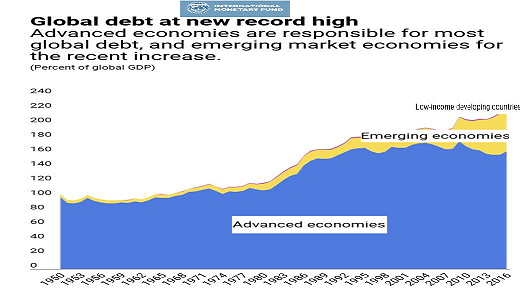 The chart above shows what happens if you spend a lot of money without getting much return in terms of growth.  Again from the IMF, it shows that total global debt has risen to $164tn.  This is more than twice the size of global GDP – 225%, to be exact, based on latest 2016 data.  The IMF analysis also highlights the result of the money printing:

“Debt-to-GDP ratios in advanced economies are at levels not seen since World War II….In the last ten years, emerging market economies have been responsible for most of the increase. China alone contributed 43% to the increase in global debt since 2007. In contrast, the contribution from low income developing countries is barely noticeable.”

It doesn’t take a rocket scientist to work out the result of this failed policy, which is shown in the above IMF charts:

CAN ALL THIS DEBT EVER BE PAID PACK?  AND IF NOT, WHAT HAPPENS?

As everyone knows, borrowing is easy.  Almost all governments and commentators have lined up since 2009 to support the money-printing policy.  But the hard bit happens now as it starts to become obvious that the policy has failed.

We now have all the debt, but we don’t have the growth that would enable it to be paid off.

It would be easy to simply end here, and point out that John Richardson and I set out the reasons why money-printing could never work in 2011, when we published Boom, Gloom and the New Normal: How the Ageing of the BabyBoomers is Changing Demand Patterns, Again.  Our conclusion then was essentially based on common sense:

But having been right in the past doesn’t help to solve today’s problem of excess debt and leverage:

Financial markets are doing their best to warn us that the problems are growing.  Longer-term interest rates, which are not controlled by the central banks, have been rising for some time. They are telling us that some investors are no longer simply chasing yield.  They are instead worrying about risk – and whether their loan will actually be repaid.

Essentially, we are now in the and-game for stimulus policies.  Major debt restructuring is now inevitable – either on an organised basis, as set out by Bill White, the only central banker to warn of the 2008 Crisis – or more chaotically.

This restructuring is going to be painful, as the chart above on the impact of leverage confirms.  I originally highlighted it in August 2007, as the Crisis began to unfold – unfortunately, it now seems to have become relevant again..

PLEASE DON’T FIND YOURSELF SWIMMING NAKED WHEN THE TIDE OF DEBT GOES OUT
Leverage makes people appear to be geniuses on the way up.  But on the way down, Warren Buffett’s famous warning is worth remembering: “Only when the tide goes out do you discover who’s been swimming naked”.

*Return on Equity is the fundamental measure of a company’s profitability, and is defined as the amount of profit or net income a company earns per investment dollar.