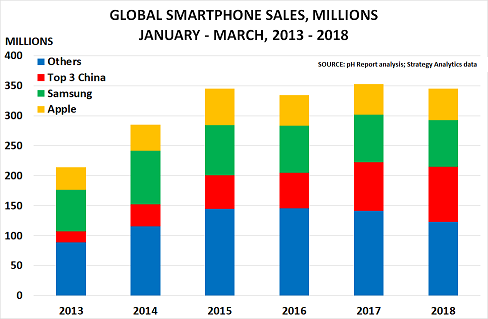 The global smartphone market has finally gone ex-growth as China’s slowdown continues.  In turn, the market is starting to polarise – with Apple pushing further up-market whilst Chinese brands such as Xiaomi focus on volume.  Samsung’s middle market positioning looks increasingly under threat:

“Samsung is holding steady in its core markets of North America, Western Europe and South Korea, but the company is facing intense competitive pressure in China and India from rivals such as Xiaomi. Apple volume grew 3%.

“Huawei grew 14% despite headwinds in North America (whilst) Xiaomi doubled marketshare versus 2017 as its growth soared 125%. Xiaomi is expanding like wildfire across Asia, particularly in India.  OPPO has been hit hard by Xiaomi’s rapid retail expansion and Huawei’s much-improved Android device portfolio.” 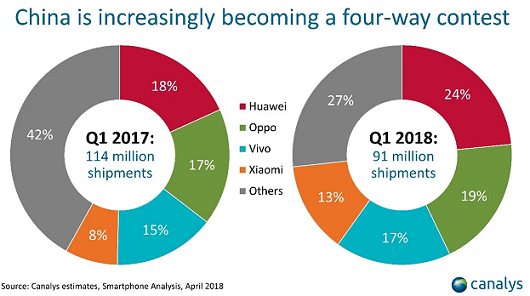 The key to Q1’s decline was the collapse in China’s market, where sales fell 19% to 91m, and were back at 2013 levels according to Canalys data.  And as the chart shows, the 4 main players are consolidating their position:

“There is a sense of fatigue in the market. The level of competition has forced every vendor to imitate the others’ product portfolios and go-to-market strategies.  But the costs of marketing and channel management in a country as big as China are huge, and only vendors that have reached a certain size can cope.”

Xiaomi’s growth is due to its focus on the sub-RMB1000 level ($160).  Its recent launch of cheap up-market phones will put more pressure on competitors and further drive consolidation in the market. 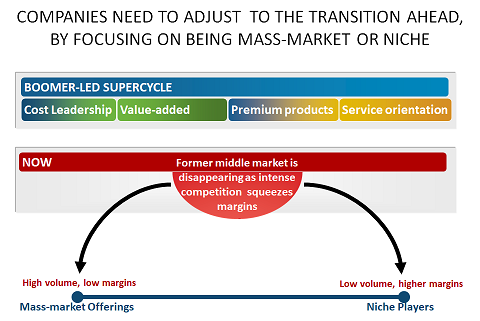 It is, of course, no accident that China’s downturn has ended global market growth.  Its vast stimulus programme after 2008’s financial crisis meant that it became the growth engine for the global economy.  But now President Xi’s resolve to make “deleveraging” one of his “3 tough challenges” is changing the rules of the game, again:

Apple CEO, Tim Cook, has deliberately turned his back on the mid-market, positioning the new iPhone X at the $1000 price point, where it has consistently outsold the cheaper iPhone 8 and iPhone 8Plus. In turn, this led profits to jump 25%.  As a result, Apple is the clear leader in the high-end sector with its relatively niche products and high margins. As the Financial Times reports:

“iPhone unit sales of 52m were up only 3% by volume but the product’s revenues jumped 14%, as the iPhone X drove its average selling price up by $73 compared with a year ago, to $728.”

Similarly, Xiaomi’s success in China highlighted the opportunity in the mass-market.  Its market share jumped to 13% as it aimed to make a net profit margin of just 5% on its $100 – $160 phones.

INVESTORS NEED TO WATCH FOR BANKRUPTCIES AS CONSOLIDATION REVS UP
The free money provided by the central banks since 2008 has had two key effects:

Now, both of these trends are reversing.  Consumer spending is increasingly being driven by income, rather than borrowing.  Companies are seeing interest rates rise on their debt: even worse, those who borrowed to take advantage of low US rates are seeing repayments rise as the US$ rises again.

Investors need to be very careful about where they place their bets for the future.  And companies need to check out their business partners’ strategies.  Falling volumes and higher interest/debt costs will lead to a wave of bankruptcies.

Most analysts are ignoring the changes underway in China.  As with subprime, they will soon argue that “nobody could have seen this coming”.  But in reality, there are always warning signs.  The global smartphone market has been the great success story of the stimulus era.  Its paradigm shift is highlighting the likely “surprises” that lie ahead.