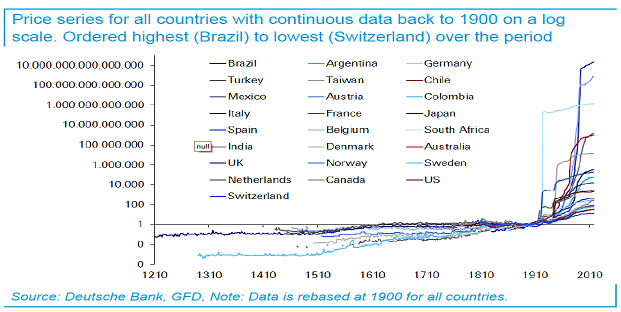 “The 1950-2000 period is like no other in human or financial history in terms of population growth, economic growth, inflation or asset prices.”

This quote isn’t from ‘Boom, Gloom and the New Normal: How Western BabyBoomers are Changing Demand Patterns, Again‘, the very popular ebook that John Richardson and I published in 2011.  Nor is the chart from one of the hundreds of presentations that we have since been privileged to give at industry and company events around the world.

It’s from the highly-respected Jim Reid and his team at Deutsche Bank in their latest in-depth Long-Term Asset Return Study, ‘The History (and future) of inflation’.  As MoneyWeek editor, John Stepek, reports in an excellent summary:

“The only economic environment that almost all of us alive today have ever known, is a whopping great historical outlier….inflation has positively exploded during all of our lifetimes. And not just general price inflation – asset prices have surged too.  What is this down to? Reid and his team conclude that at its root, this is down to rampant population growth.” (my emphasis)

As Stepek reports, the world’s population growth since 1950’s has been far more than phenomenal:

“From 5000BC, it took the global population 2,000 years to double; it took another 2,000 years for it to double again. There weren’t that many of us, and lots of us died very young, so it took a long time for the population to expand.  Fast forward another few centuries, though, and it’s a different story.

“As a result of the Industrial Revolution, lifespans and survival rates improved – the population doubled again in the period between 1760-1900, for example. That’s just 140 years.  Yet that pales compared to the growth we’ve seen in the 20th century. Between 1950-2000,  a mere 50 years, the population more than doubled from 2.5bn to 6.1bn.” 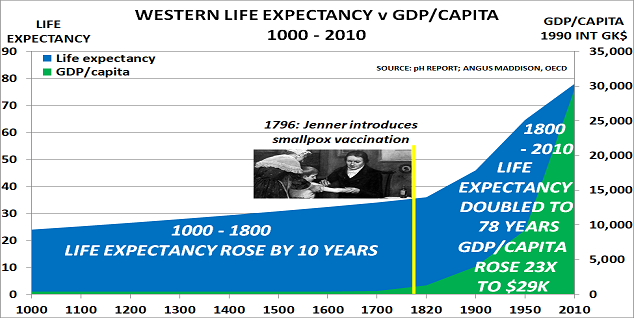 “Vaccination against smallpox was almost certainly the critical factor in enabling the Industrial Revolution to take place. It created a virtuous circle, which is still with us today:

The last point is especially striking, as US sociologist Viviana Zelizer has shown in Pricing the Priceless Child: The Changing Social Value of Children. We take the concept of childhood for granted today, but even a century ago, New York insurance firms refused to pay death awards to the parents of non-working children, and argued that non-working children had no value.

Deutsche’s topic is inflation, and as Stepek notes, they also take issue with the narrative that says central banks have been responsible for taming this in recent years:

“The Deutsche team notes that inflation became less fierce from the 1980s. We all think of this as being the point at which Paul Volcker – the heroic Federal Reserve chairman – jacked up interest rates to kill off inflation.  But you know what else happened in the 1980s?

“China rejoined the global economy, and added a huge quantity of people to the working age population. A bigger labour supply means cheaper workers.  And this factor is now reversing. “The consequence of this is that labour will likely regain some pricing power in the years ahead as the supply of it now plateaus and then starts to slowly fall”.”

THE CENTRAL BANK DEBT BUBBLE IS THE MAIN RISK

The chart above from the New York Times confirms that that the good times are ending.  Debt brings forward demand from the future.  And  since 2000 central banks have been bringing forward $tns of demand via their debt-based stimulus programmes.  But they couldn’t “print babies” who would grow up to boost the economy.

Today, we just have the legacy of the debt left by the central banks’ failed experiment.  In the US, this means that the Federal government is almost at the point where it will be spending more on interest payments than any other part of the budget – defence, education, Medicaid etc.

THE ENDGAME FOR THE DEBT BUBBLE IS NEARING – AND IT INVOLVES DEFAULT
Global interest rates are already rising as investors refocus on “return of capital”.  Investors are becoming aware of the risk that many countries, including the USA, could decide to default – as I noted back in 2016 when quoting William White of the OECD, “World faces wave of epic debt defaults” – central bank veteran:

The next recession is just round the corner, as President Reagan’s former adviser, Prof Martin Feldstein, warned last week.  This will increase the temptation for Congress to effectively default by refusing to raise the debt ceiling.  Ernest Hemingway’s The Sun also Rises probably therefore describes the end-game we have entered: