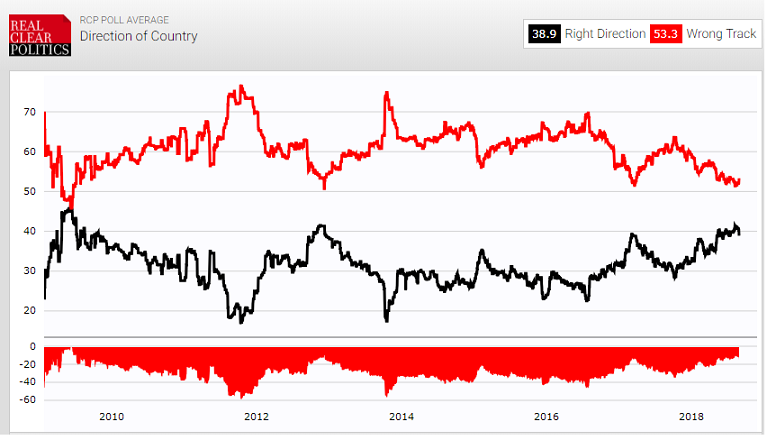 This is the Labor Day weekend in the USA – the traditional start of the mid-term election campaign.  And just as in September 2016, the Real Clear Politics poll shows that most voters feel their country is going in the wrong direction.  The demographic influences that I highlighted then are also becoming ever-more important with time:

“Demographics, as in 1960 and 1980, are therefore likely to be a critical influence in November’s election:

2 years later, the median age is still increasing, and the average Boomer is aged 63.

This has clear consequences for the likely outcome of the mid-terms, with the latest FiveThirtyEight poll suggesting the Democrats have a 3 in 4 chance of winning control of the House.  In turn, of course, this increases the risk of impeachment for Trump and makes it even more difficult for him to stop the Mueller investigation.  We therefore have to assume that Trump will do everything he can to reduce this risk over the next few weeks. 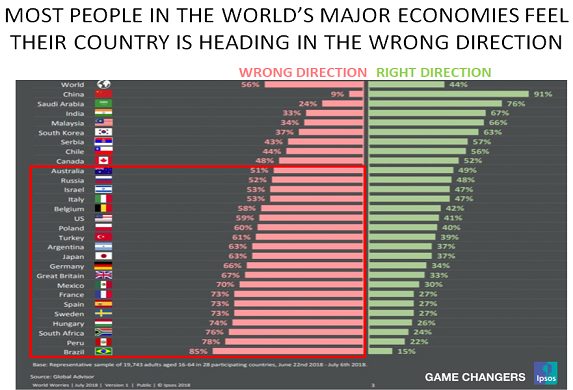 Americans are not alone in feeling that their country is heading in the wrong direction, as the latest survey (above) for IPSOS Mori confirms.  And they have been feeling this for a long time – as I noted back in November 2016:

Today Malaysia, S Korea, Serbia and Chile have moved into the positive camp.  But Argentina, Peru and Russia have gone negative.  And if we narrow down to the world’s ‘Top 10’ economies:

There is a clear message here, as the median ages of the ‘Unhappy 7’ are also continuing to rise: 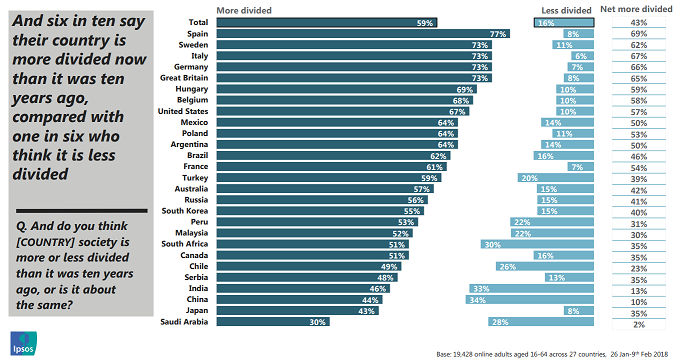 The key issue is summarised in the 3rd slide from a BBC poll, which shows that 3 out of 4 people in the world believe their country has become divided.  More than half believe it is more divided than 10 years ago.

There is also a clear correlation with the demographic data:

POLITICIANS ARE INCREASINGLY FOCUSED ON ‘DIVIDE AND RULE’
One might have expected that politicians would be working to remove these barriers.  But the trend since 2016 has been in the opposite direction.  Older people have historically always been less optimistic about the future than the young.  And the Populists from both the left and right have been ruthless in exploiting this fact.

This trend has major implications for companies and investors. As long-standing readers will remember, very few people agreed with my suggestion in September 2015 that Trump could win the US Presidency and that political risk was moving up the agenda.  As one normally friendly commentator wrote:

“Hodges’ predictions are relevant to companies, he says, because of the likelihood of political change leading to political risk:

“Of course a prediction skeptic like me would say this, but I have a very, very, very difficult time imagining that populist movements could have significant traction in the U.S. Congress in passing legislation that would seriously affect companies and investors.” (my emphasis)

Yet 3 years later, this has now happened on a major scale – impacting a growing range of industries and countries.

As the mid-term campaigning moves into its final weeks, we must therefore assume that Trump will focus on further consolidating his base vote.  Further tariffs on China, and the completion of the pull-out from the Iran nuclear deal are almost certain as a result.  Canada is being threatened in the NAFTA talks, and it would be no surprise if he increases the economic pressure against the US’s other key allies in the G7 countries, given the major row at June’s G7 Summit.

Anyone who still hope that Trump might be bluffing, and that the world will soon return to “business as usual”, is likely to have an unpleasant shock in the weeks ahead.