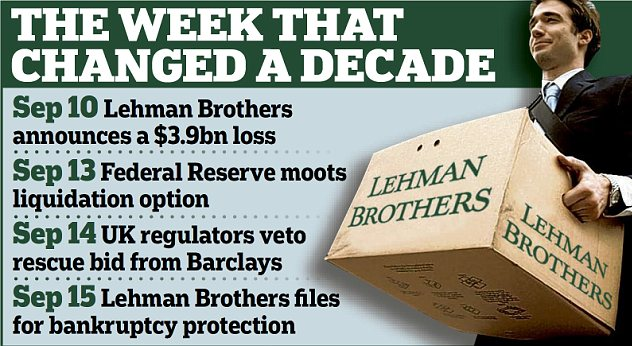 It’s 10 years since my forecast of a global financial crisis came true, as Lehman Brothers collapsed.  I had warned of this consistently here in the blog, and in the Letters column of the Financial Times. But, of course, nobody wanted to listen whilst the party was going strong.  As the FT’s world trade editor wrote at the time, commenting on the Queen’s question “Why did nobody see this coming”:

“Why didn’t people see it coming? Some did, Ma’am. Some did. But it doesn’t mean they were listened to. And there is a long history of people in authority running up vast debts without public accountability and eventually losing their heads. Let’s just try and get through this one without a civil war, shall we?”

That rationale, I understood.  I was the “party pooper” warning of crisis for nearly 2 years.  But people didn’t want warnings.  And, of course, until we got to March 2008 and Bear Stearns collapsed, I couldn’t answer their all-important question, “When is this going to happen?”.

If you take the 4 great questions of life – Why, What, How and When – the ‘When’ question is really the least important: 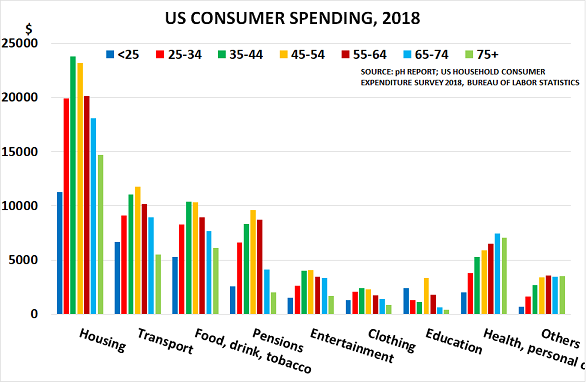 But I admit that what did surprise me, after John Richardson and I had written Boom, Gloom and the New Normal: how the Western BabyBoomers are Changing Demand Patterns, Again, was that people really liked our analysis of the impact of demographic change on the economy – but still ignored its implications for their business and the economy.

The above chart is a good example, showing the latest data from the US Consumer Expenditure Survey.  It confirms what common sense tells us:

This is critical information for central bankers, companies and investors, given that consumer spending is 60%-70% of GDP in most developed countries.

Yet the only central banker who took it seriously, Masaaki Shirikawa, Governor of the Bank of Japan, was promptly sacked after premier Abe came to power.   Printing money seemed so much easier than having difficult but essential discussions with voters about the impact of an ageing population, but as Shirikawa noted:

“The main problem in the Japanese economy is not deflation, it’s demographics. The issue is whether monetary policy is effective in restoring economic recovery. My observation is, it is quite limited.” 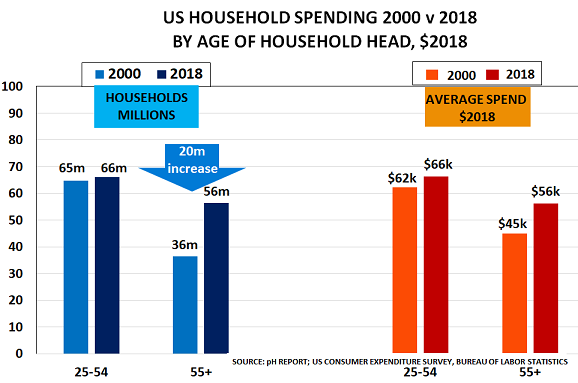 Equally, the second chart confirms that the US is also a rapidly ageing society, with 20m households having moved into the 55+ age range since 2000.  And whilst the 55+ group’s spending has increased over the period, this is only because many of the younger BabyBooomers are still in their 50s or early 60s.  So whilst their spend is declining, it hasn’t yet suffered the 43% fall that occurs after the age of 75 (by comparison with the peak spending 45-54 period).

Yet policymakers still insist that the 2008 crisis was all about liquidity, and had nothing to do with the impact of today’s ageing populations on spending and economic growth.  And most companies also still plan for “business as usual”.

SO WHAT HAPPENS NEXT, AS THE DEBT BURDEN GROWS?
For obvious reasons, I disagree with these views.  Of course, it would be lovely to find that today’s record levels of debt – created in the vain attempt to stimulate growth – could be made to simply disappear.  I have read analyses by learned commentators arguing that central banks can simply “write off” their debt, and it will magically disappear.

But I have never yet found a bank or credit card company prepared to “write off” any debt that I owe them in this way.  (If you know of one, please let me know, and I will pass on the details).  And most of us know from personal experience that interest costs soon mount up, if you can’t pay the debt at once and have to finance it for a while.

So its quite clear that today’s record levels of debt create massive headwinds for future growth. At $247tn, it now amounts to 318% of global GDP.  In reality, only two choices lie ahead:

But, of course, I can’t yet say exactly ‘When?’ this simple fact will finally impact the economy and markets.  For the moment, as between 2006 – March 2008, I can only tell you:

‘Why?’ it is going to happen, ‘What?’ it involves and ‘How?’ you can recognise the warning signs.