The Great Freeze in Texas has confirmed once again the problems with today’s global supply chains.  As the New York Times has highlighted:

“The pandemic has disrupted every stage of the (supply chain) journey”.

The problems began last year with the disruption to the global shipping container system. Millions of containers were used to ship PPE and other critical supplies around the world. But many of them never came back into the system, as the receiving countries had nothing to return in them. And ships only visit ports when there is cargo to collect.

The pharma industry was next to be hit, as governments slapped export controls on a wide range of drugs and the intermediates from which they are produced. At one point, for example, the UK was only days away from running out of paracetamol.  And today, of course, serious shortages are impacting the production and distribution of Covid-19 vaccines.

Then it was the turn of the auto and electronics industries, who found themselves short of the semi-conductors they need to make their products work. Carmakers including Ford, Toyota and VW have all had to shut down factories. And there are warnings that the problems could last until the autumn. In electronics, Sony and Microsoft have been forced to cutback, whilst Samsung may have to delay its new Galaxy Note.

And now companies are struggling with the impact of the snowstorm in Texas. The electricity companies decided to save money by not properly winterising the grid, and the politicians wouldn’t allow links to out-of-state grids to avoid coming under Federal rules. Chemicals and plastics markets have now been very badly hit, with LyondellBasell warning:

“The industry is unable to meet the existing level of demand”.

Clearly it is time for new business models to be developed, based on more local and reliable sources of supply.

Globalisation was right for its time when the global population was expanding very rapidly. It trebled from 2.5bn in 1950 to 7.6bn by 2000 – so increasing supply had to be the priority. But today’s population growth is due to increasing life expectancy, with the Perennials 55+ generation now the main source of growth almost everywhere.

In turn, the Perennials are changing market dynamics.  Older people don’t need a lot more “stuff” – instead they need to be able to do more with less. And so sustainability is now replacing globalisation as the key driver for business. 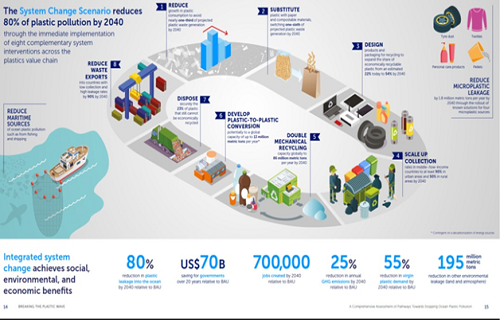 As the chart from the Pew Foundation confirms, there is no need to continue with today’s outdated business models:

New business models need to be created, covering the entire value chain. These will start off by creating dramatic increases in Recycling capacity. But over the medium and longer-term they will also focus on

The past year has confirmed that ‘business as usual’ is no longer an option, even if we were prepared to tolerate the waste and pollution that it causes. So these are exciting times for those with a vision of the changes needed, and an idea of how to turn them into practice.