ICIS Chemical Investor: What does the calming of chemical price volatility mean for M&A practitioners?

2019 was a slow year for chemicals M&A deals, although this was largely the result of intense activity in the preceding three years. Furthermore, against a backdrop of chemical price erosion and continued capacity expansions, buyer/seller assessments of earnings and thus earnings multiples differed more than usual. According to White and Case, the total number of chemicals M&A deals decreased 26% year on year to the lowest number since 2012.

The general expectation in January this year was that 2020 would be busier, as bidders took advantage of weak chemicals prices and supressed company earnings. However, the global coronavirus pandemic and collapsing oil market conspired to nullify these expectations by the end of Q1.

And so, for much of the year, the media has been awash with bearish tales of barren M&A pipelines, bonuses being cut, and teams being slashed. The following excerpt from a Forbes article sums up the apparent sentiment amongst corporate advisories.

“Global mergers and acquisitions have already plummeted as result of the coronavirus crisis, and by the end of March 2020 had reached a near standstill. M&A levels in the United States fell by more than 50% in the first quarter to $253 billion compared to 2019, but most of those transactions were entered into or closed earlier in the quarter before the crisis spread worldwide.”

Indeed, many chemicals sector majors have distanced themselves from the M&A world, focusing on improving their balance sheets. Dow recently has said that it is not actively pursuing M&A deals:

“We don’t have a lot of cash to do M&A right now,” said Jim Fitterling, Dow CEO. He made his comments during an investor webinar hosted by Sanford C Bernstein. “We need to navigate through this pandemic.”

He said, “I have sharpened the focus of our acquisition pipeline – I want to be more selective in M&A because I believe it’s very important to focus on investing countries with higher GDP growth rates, especially in Asia. I also want to invest in segments with more attractive growth rates such as food & nutrition, personal care and pharma.”

This follows the Nippon Shokubai and Sanyo Chemical Industries postponement of their merger from 1 October 2020 to April 2021 due to the pandemic.

Dow’s CEO doubling down on capital and cashflow management is unlikely to be irregular logic among his industry peers. Many commodity chemicals majors have higher-than-sector-average D/E ratios (a reflection of leverage) and therefore, major CAPEX projects are likely to come up against severe shareholder resistance. 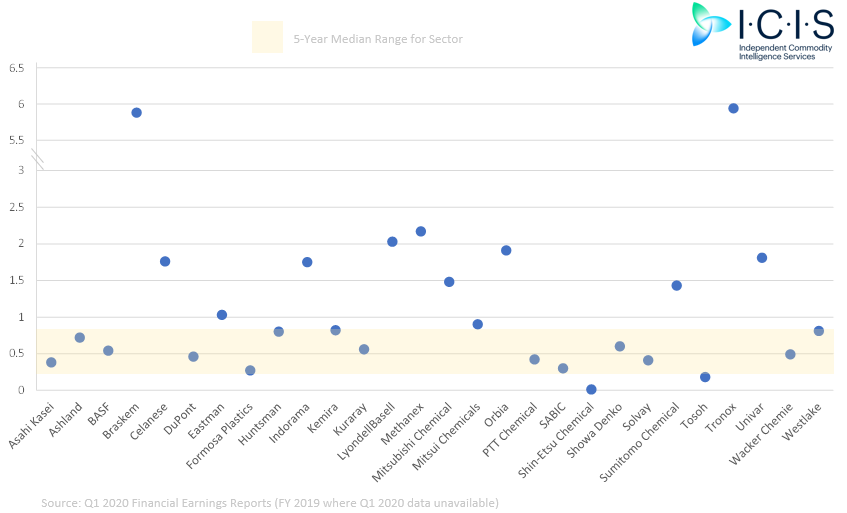 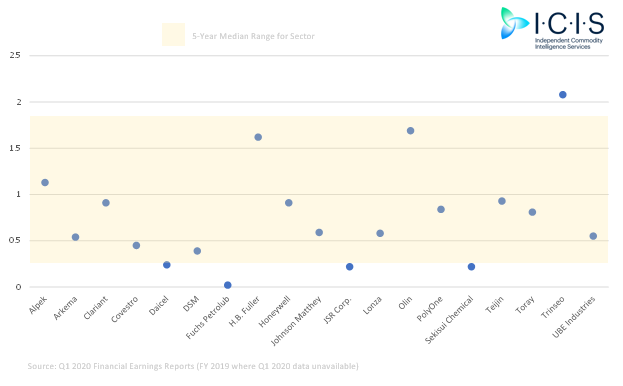 Specialty chemicals producers are mostly running healthier debt to equity ratios but with so much of their long-term value tied up in R&D, few will be willing to allocate substantial capital to M&A unless it is fully necessary for delivering on long-term strategies e.g. expanding product output, vertical integration. 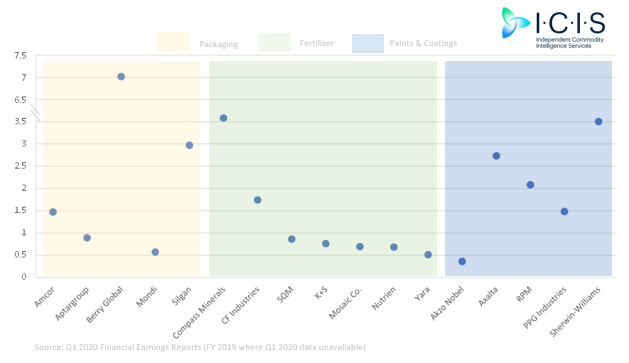 Chemical fertilizer manufacturers have among the healthiest balance sheets from a leverage perspective and given the recent scale of M&A (e.g. PotashCorp-Agrium tie up to create Nutrien), smaller, strategic deals in this space are not improbable. It is likely that fertilizer M&A in H2 2020 will be either opportunistic (buying a competitor’s cheap assets) or carve out/bolt on in nature.

I cautiously argue that the worst is behind us, from a stock price and chemicals price perspective at least. I say this because with every day that goes by we get a better understanding of how economies can roll back lockdown measures and boost economic output, how businesses are adapting and how science is getting us closer to solving the coronavirus  problem. Of course, the spectre of uncertainty which has dominated discussion through H1 is still there, but we are adapting to this new normal. Crucially, it is becoming a little easier to justify our forecasts for end-use consumer demand and therefore earnings forecasts carry a little more weight – this is good from a M&A negotiations perspective.

Logistically, we still have challenges, of course. Investment bankers cannot so easily get on a plane and go and visit a seller’s plant. However, we have witnessed an extraordinary level of adaptability already – one banker I have spoken to have conducted whole tours of physical assets via drone on a live video conference with the buyer and seller. He argued that not only was it more efficient than manually visiting, it provided for a more comprehensive discussion between the seller and buyer.

Last week’s Financial Times Due Diligence provided another great example of this:

“Stephan Dolezalek, the executive director of the agritech investment company Wheatsheaf, was doing his due diligence on a prospective start-up investment via a video feed from a camera mounted on a hard hat.  For a deal that would’ve required him to travel to the company’s location, do a tour, meet with executives and head back home, he got a one hour virtual tour of its facility.  In Beijing, Philip Beck, an angel investor and fundraiser, has had similar experiences. Time spent doing due diligence, he thinks, has sped up 25 per cent.” 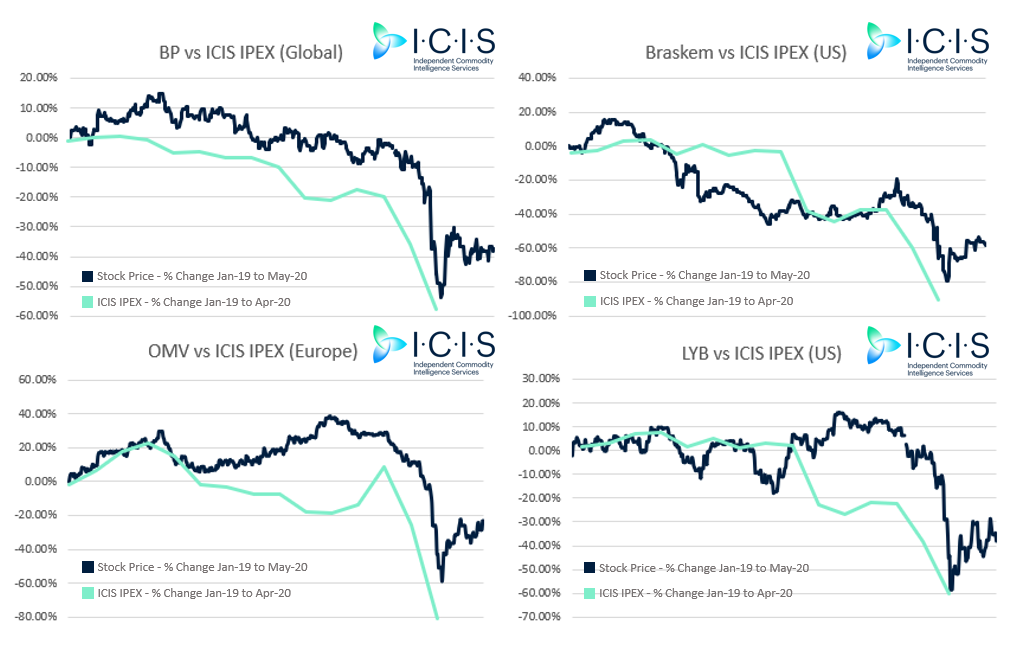 As ICIS Head of Market Reporting, Barbara Ortner, discusses in her latest video, upstream chemical markets appear to be recovering with many aromatics and olefins prices firming in recent weeks.

PREVIOUS POST Amid information madness, it’s the methods that matter
NEXT POST Consumers’ desire for sustainable packaging has not been shelved by pandemic