ICIS: Mergers and Acquisitions, will H2 be the new dawn?

Given how slow H1 2020 has been from an M&A perspective, it is easy to welcome the $5bn INEOS/BP petrochemicals deal announced on 29 June as some sort of harbinger of a deal-ridden, pent-up demand driven summer.

As Telly Zachariades, managing director of Piper Sandler Chemicals and Materials told my colleague Joseph Chang, the deal “is likely a one-off and not indicative of a trend of large oil companies divesting petrochemicals assets”.

It is also worth reflecting on the past relationship of BP and INEOS to contextualise this deal; the latter was formed in 1998 to acquire BP chemical assets. INEOS then bought BP’s Innovene business in 2005. Arguably, this latest announcement has been a long time coming.

Is seems fair to conclude that this is an isolated case and that we cannot interpret anything meaningful from the deal with regards to sector M&A in H2.

There *must* be a lot of pent up demand for M&A though, right?

In principle, yes. Valuations are reasonable low and off the back of a terribly slow Q2 (according to the FT, deals dropped to their lowest levels since 2009).

“The numbers are almost on par with the second quarter of 2009, when dealmakers were trying to get to grips with the fallout from the worst financial crisis in decades.”

For private equity firms, there is a lot of pent-up demand for deals even with less financing, but just not enough assets available.

“If private equity was able to get financing of 6x EBITDA (earnings before interest, tax, depreciation and amortisation) before and only 5x now, they are willing to make the difference by over-equitising now and refinancing later,” said Zachariades.

On the sell-side, the coronavirus crisis is unlikely to change the carve-out strategy on the part of corporates. Even during the crisis, some of these activities have continued, the banker pointed out.

“Following a busy and active Q1, as expected there was a significant drop-off in global M&A activity in Q2…though even larger declines are expected in a volatile Q3, there are signs of promise and opportunities to close deals even with constraints on due diligence and overall de-risking,” said Jurgis V. Oniunas, IMAP Chairman. 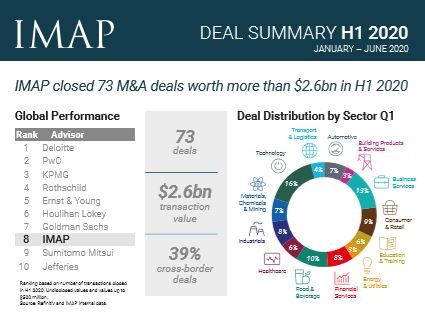 Arkema in April also announced a strategic review of options for its methyl methacrylate (MMA) and polymethyl methacryate (PMMA) business.

On balance, the M&A market prospects for H2 2020 are bullish compared to H1 2020. However, much of this will depend on the macroeconomic conditions the world faces in late Q3 after the US and EU stimulus packages have expired and employment data etc. more accurately reflects reality.