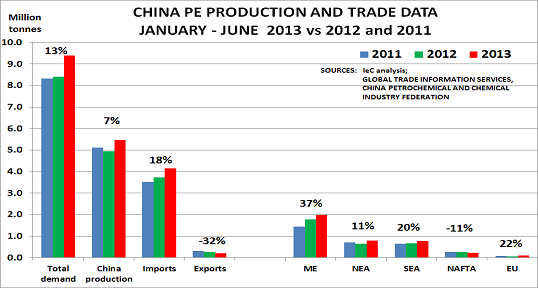 China’s polyethylene (PE) demand has seen encouraging signs of growth in H1.  As the chart above shows (based on Global Trade Information Services data):

The driver for the increased volume seems to be the various ‘scares’ about food contamination, which have increased use of plastics in food packaging.  As fellow-blogger John Richardson notes, Operation Green Fence – a new clampdown on shipments of illegal waste – also seems to be impacting supplies of recycled plastic. 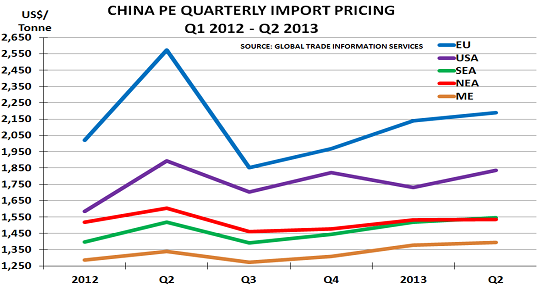 The second chart, above, also based on GTIS data, highlights the impact of this new volume on pricing.  It shows prices on a quarterly average basis between Q1 2012 – Q2 2013:

The chart also highlights how NEA has become increasingly competitive on price, in order to maximise its volume.  Its average prices were actually marginally cheaper than SEA in Q2 2103, compared to a 9% premium in Q1 2012.

This creates a dilemma for US producers.  So far, they have chosen to focus on selling higher priced PE grades.  This helped Dow earn $1bn in its plastics business in Q2, up 30% on 2012.  But this policy would have to change, if the proposed new world-scale plants are built, as most of this volume would have to be exported.

Shale gas means the US has the cost advantage to compete successfully in export markets in the more commodity-type grades.  But increasing the focus on volume would risk impacting profit margins in domestic as well as export markets.