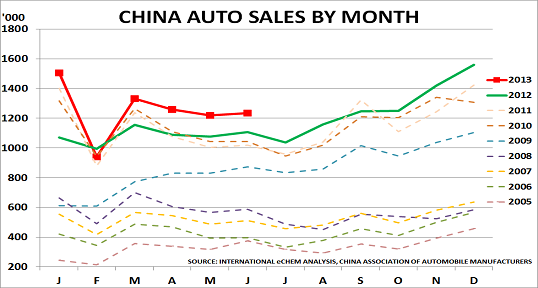 China’s state media have published major revisions to reported auto sales data for H1, and for the equivalent period in 2012.  As far as the blog knows, these have not been noticed elsewhere, so it seems worth providing more detail on the changes that have been made.  Auto sales are a vitally important market, and these changes are quite significant, revising down the original numbers by 9%.

ORIGINAL DATA
The original official monthly sales reports through April were as follows:

REVISED DATA
The chart shows the new data, which revise down H1 2013 and H1 2012 data quite significantly:

We do not know why the new data is now being published in the state-owned journals.  It comes from LMC automotive and seems to be a welcome attempt to define actual retail sales for the first time.  This would be a major change from the previous reports based on data from China’s Passenger Car Association, which equated factory output to actual sales.  Certainly the more detailed data quality suggests this may be at least partly a cause, as it provides a breakdown by brand, manufacturer and segment for the first time.

The changes are a healthy reminder that data quality and disclosure principles in China does not meet normal Western standards.  They also remind us that it is unwise to take any published Chinese data, including GDP growth, at face value.