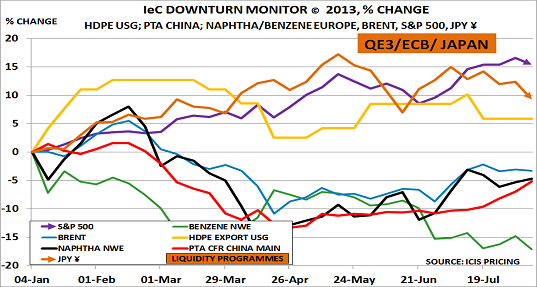 Markets have moved into summer holiday mode in recent weeks whilst they wait for a new direction, as the chart shows.  It is therefore timely to look back over developments since the start of the year:

The S&P 500 (purple) has been the clear winner, up 15%.  The key to its out-performance has been the central bank stimulus programmes, which in turn have supported earnings in the financial sector.  Without this bonus, earnings would have been flat overall.  Equally worrying, as S&P note, is that “While companies have been successful at cutting costs, which is apparent from their bottom line growth, the businesses’ dismal sales results illustrate that they are simply not growing.”  Another concern is that the latest GDP data shows wages and salaries were just 42.6% of GDP in 2012 – the lowest percentage since records began in 1929.  Without growth in wages, it is hard to see how sustained growth can take place in the wider economy.

The US$ has also been strong (orange), gaining 9% versus the Japanese yen.  This has been due to the policies of new premier Abe, who has tried to talk down the yen’s value in order to encourage exports.  He also hopes the weaker yen will encourage inflation, and end Japan’s 20-years of deflation.  But the yen has stabilised since May, as markets have instead focused on Japan’s unaffordable current account deficit.  They have realised that Abe’s “fourth policy arrow” of a rise in the consumption tax (VAT) next year, will almst certainly reduce consumer demand, and thus make the return of inflation less likely.

Polyethylene (yellow) has also been strong, with export prices up 6%.  This is counter-intuitive, as US polyethylene is mainly manufactured from ethane, where the US currently has a major cost advantage against oil-based producers in Europe and Asia.  But clearly producers have chosen to prioritise profits rather than volume.  Thus (as the blog will discuss later this week), they have focused their sales effort on Latin America and particularly Brazil, where the market is currently buoyant ahead of next year’s World Cup and the 2016 Olympics

Brent oil prices (blue) are down 3%.  The New Year rally took them up 6%, but they then ran out of steam.  It is, of course, remarkable that they are anywhere near current levels of $100/bbl, given the fundamentals of increasing production, slowing demand and high inventories.  Other commodity prices have begun to fall, and oil also looks vulnerable.  Interestingly, Daniel Yergin, a recognised expert on oil markets, has now begun to share the blog’s analysis of the situation.

Naphtha (black), has naturally followed oil price developments and is down 5%.  This reflects the difficulty of passing through today’s oil prices along the value chain.  Thus New Year optimism of a sustained revival in demand, which temporarily took prices 8% higher, has not been maintained.  Lower production ex-refineries has, however, meant that prices have rebounded from April’s 15% decline, when demand worries took hold.

PTA (red) has reflected the weakening position of China’s economy and is down 5%.  It saw only a modest New Year rally, when most analysts naively argued the new leadership would unleash another major stimulus programme.  By April, disappointment had led prices to a decline of 13%, before higher oil prices provided support by pushing up prices for paraxylene feedstock.

Benzene (green) has, of course, essentially become a by-product in recent years, and its price has been supported by major cutbacks in supply ex-refineries and crackers.  This meant its prices were artificially high relative to the supply/demand balance during 2011-12, but they they have since weakened sharply in 2013.  It is, in fact, the only product to have been consistently lower than its New Year price all through the year, and is now down 17%.  This is probably telling us something quite important about the underlying weakness of global demand.

Chemical markets do well when the consumer is feeling confident.  Thus their weak performance in 2013 highlights the way central bank stimulus policies have produced the opposite result to that intended.  If policymakers stopped provided free cash to their speculative friends in the financial sector, then energy and other prices would fall back to normal levels, and the consumer might feel able to start spending again.  But at the moment, her money has to be spent on non-discretionary items such as heating her home, and on transport – so she has no money left for the discretionary spending that would support chemical sales.