Chloralkali output suggests EU and US recoveries still to appear 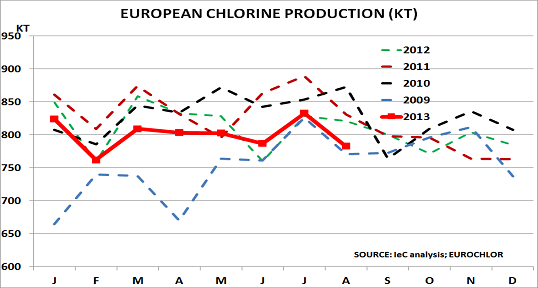 Chlorine and caustic soda markets rarely lie about the underlying state of demand.  The reason is not just because they have been widely used for over 125 years.  But the production process is also relatively flexible, and can be adjusted within minutes to align with supply/demand changes.

So the picture in the chart above of falling chlorine production (red square) in 2013, relative to the 2010-12 period, needs to be taken as a serious warning about the state of the European economy.  Total chlorine volume to August at 6.4MT is the lowest since 2009, plus:

The picture is also consistent with US data.  This showed August chlorine production down 1.7% versus 2012, and operating rates at 85%.  Rates have been below 90% all year.

Chlorine and caustic soda are the most basic chemical products, used in the widest variety of industries.  Their production data confirms the blog’s fears when reviewing output data back in April.  The promised economic recovery, and upturn in housing markets, is still a long way off.  Whilst the most recent data suggests the outlook may well be getting worse, not better.