Home Blogs Chemicals and the Economy “Disaster is still some way off” for Cyprus, as Germany prepares to vote

“Disaster is still some way off” for Cyprus, as Germany prepares to vote 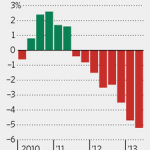 Back in April, the blog suggested that capital controls might remain for rather longer in Cyprus than the “few days or weeks” suggested by the central bank.  And a month later, the bank was still unrealistically claiming they would be lifted “as soon as possible”.

Today, the blog’s own view that they could be in place “for a decade or more” is looking more and more likely.

As the chart from the Wall Street Journal shows, the decline in GDP is accelerating, contrary to all the official forecasts.  GDP fell 4.8% in Q1 and 5.4% in Q2.  As the Journal notes:

“Christopher Pissarides, a Nobel laureate and head of the government’s council of economic advisers, acknowledges that the economy is sinking faster than expected.”

Credit has basically stopped on the island, with most transactions now in cash.  And the economy’s downward spiral is likely to intensify.  Unemployment was 17.3% in June, well above the forecast of 15.5%.

Basic industries are suffering badly.  Cement sales are only 25% of those in 2008.  And as Mr Pissarides added in an unguarded moment “disaster is still some way off. But times are getting tougher.”

Clearly this is very bad news for Cypriots.  But it is equally ominous for the Eurozone for 3 key reasons:

This would not matter if the rest of the Eurozone was healthy.  But it isn’t.  Germany’s finance minister has said Greece may another bailout of perhaps €10bn.

[youtube]http://www.youtube.com/watch?v=NoEd8yOFfLA[/youtube]And then there is Portugal, whose economy is also getting worse, not better, as this Financial Times video shows.

So what will happen with Greece and Portugal?  Will the German taxpayer be asked to pay the bill all on their own?  Or will investors instead be forced to take another ‘haircut’ – to use the phrase popularised with Cyprus?

Neither option looks good.  As the blog noted in its 4 Butterflies post last month, we all know that these issues cannot be discussed before the German election on 22 September, for fear of frightening voters.  Markets clearly expect Germany to then pick up the bill on 23 September.   But the blog is not so sure.

Investors are complacent today, but they are not stupid.  If Germany forces them to take a haircut or suffer capital controls in Portugal or Greece, they will immediately worry about what might happen next in Spain and Italy?  Both will likely need outside help before too long.  Spain is not a small island like Cyprus, but the 13th largest economy in the world.  And Italy is not a minor country like Greece, but the world’s 9th largest economy.  Combined, their economies are the same size as Germany’s.

Most large companies have some exposure to both Spain and Italy either directly or indirectly.  Any CFO who hasn’t already developed a contingency plan for the period after 22 September, clearly has a few sleepless nights ahead.