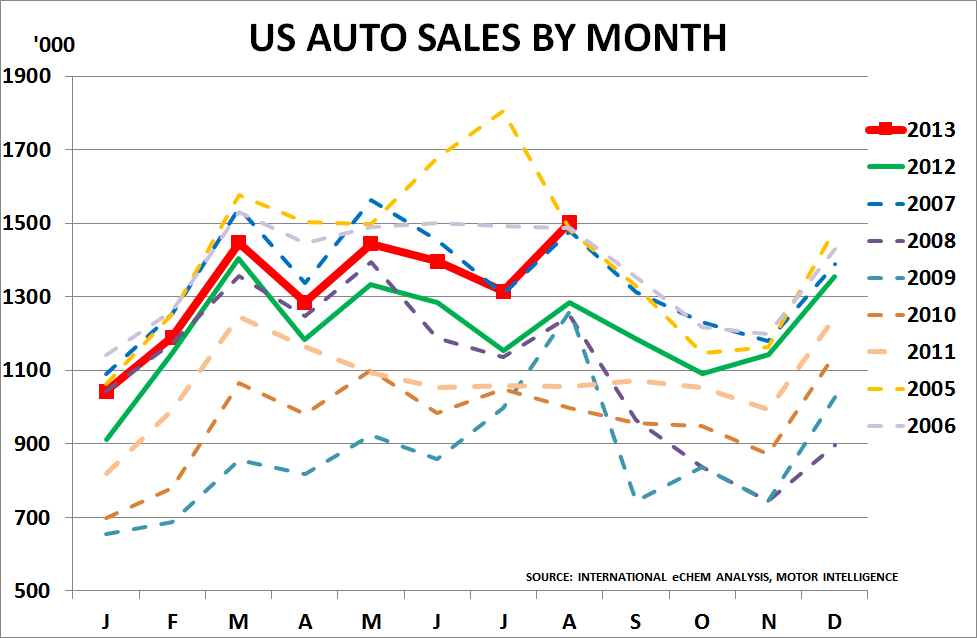 US auto sales showed continued progress in August.  As the chart shows, August volume at 1.5m (red square) was a new record for the month, and 17% above 2012 levels (green line).  In turn, of course, this was excellent news for chemical manufacturers, as the American Chemistry Council calculate each new car is worth $3539 to the industry.

Yet the demographic profile of these new car buyers gives pause for thought:

This is further support for the analysis that new car sales are not quite as buoyant as they appear at first sight:

But interest rates on 10-year Treasury bonds have nearly doubled to 3% since May, so there must be some doubts about whether these finance deals can be maintained.  And latest producer price data showed the average dealer purchase price dropped by 1.1% in July, the biggest fall for 4 years.

Adding to the question marks is data on tyre sales.  These were flat in 2012 at 284m versus 2011, despite the increase in new car sales.  The reason was simple, that affordability issues mean 1 in 8 Americans are now driving with at least 1 bald tyre, according to the Rubber Manufacturers Association.

“There is a growing concern among automakers and petrochemical makers that the pent-up demand driving US car sales to levels not seen since 2007 is eventually going to wane…. ”We know that this demand isn’t going to stay this high forever,” one petrochemical source said. “In fact, we’re not even sure it’s going to last through the end of the year.”  Indeed, automakers and petrochemical firms are worried that when this pent-up demand from the 2009 recession runs out, the market will not gradually slow down. Instead, it will plummet.”