Next week the blog will publish its 6th annual Budget Outlook, covering the 2014-2016 period.    The aim has always been to challenge conventional wisdom when this seems likely to encourage companies to take a wrong turn:

• The blog’s 2007 Outlook ‘Budgeting for a Downturn‘, and its 2008 ‘Budgeting for Survival’, meant it was one of the few to forecast the 2008 Crisis
• 2009′s ‘Budgeting for a New Normal’ was then more positive than the consensus, suggesting “2010 should be a better year for the chemical industry, as demand grows in line with a recovery in global GDP“
• The 2010 Outlook was titled ‘Budgeting for Uncertainty’. This introduced the concept of Scenario planning, to help deal with “today’s increasingly uncertain New Normal environment.”
• 2011 was titled ‘Budgeting for Austerity’ , which anticipated weak growth across Europe as a result of the austerity measures being introduced, and disappointing global growth, whilst arguing that major new opportunities were opening up as a result of changing demographic trends.

Before publishing its new Outlook each year, the blog also looks back at its latest forecast.  Past performance may not be a perfect guide to the future, but it is the best we have. 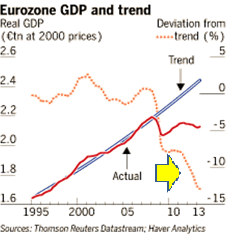 Last year’s Outlook was titled ‘Budgeting for an L-shaped recovery’, as first discussed in December 2008 – since when consensus views have moved from expecting quick recovery to something more delayed:

• Originally it was assumed we would see a quick V-shaped recovery
• Then a U-shape was expected, as recovery seemed delayed
• Next a W-shape was forecast, as new stimulus would create an upturn
• But in reality, sustained recovery has failed to appear
• Instead, we have seen volatile markets, as stimulus ebbs and flows

Since 2000, after all, the US economy has only averaged 1.7% annual GDP growth.  Whilst as the chart from the Financial Times shows, the Eurozone has seen no recovery at all since 2008, with growth now 15% below previous trend level.  The red line in the chart also looks very like an L-shape.

Equally, as Martin Wolf notes in the FT:

“Of the six largest high-income economies, only two – the US and Germany – were  bigger in the second quarter of 2013 than at their pre-crisis peaks five years  before: the US economy was 5% bigger, Germany’s 2%. The French  economy was back to its starting point while the UK’s was some 3 per cent  smaller. Crisis-hit Italy’s economy had shrunk by 9 per cent.”

A similar picture has been seen in the emerging economies, as it becomes clear their export-driven growth models have to be abandoned.  As the Wall Street Journal reports:

“China’s growth has fallen below 8%. India’s growth is below 5%. Brazil’s growth has slowed to near zero. Russian growth forecasts have been downgraded to under 2%. The slowdown reflects  economic stagnation in the U.S., Europe and Japan”

And, of course, we have to remember that even this miserable level of growth has only been achieved at the cost of $33tn spent by governments and central banks.  This is money that cannot easily be repaid with today’s L-shaped recovery continuing, and so will produce a further brake on growth in the future.  We only have to look at the recent problems in the US over the debt ceiling to see how difficult debates over repayment may become.

The other problem with this wishful thinking about future growth is that it blinds companies and policymakers to the new opportunities ahead.  Its conclusion last year still seems true today, and will form the basis for its 2014 Budget Outlook to be published next Saturday:

“Almost nobody is producing goods and services for the New Old 55+ generation in the West.  And only a few, like Nissan, are starting to manufacture affordable goods for the billions in the New Poor generation in emerging economies.  Therefore competitive pressures in these two vast and growing sectors are very low.   These are the two great business opportunities of our lifetimes.  The companies that now use the 2013-15 period to access these, will be building the foundations for decades of future success”

Next month’s World Aromatics and Derivatives Conference in Brussels has a ...

This is Budget week, when the blog prepares to present its Budget Outlook for 20...