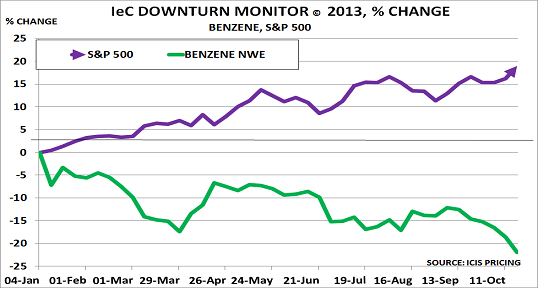 This is Budget week, when the blog prepares to present its Budget Outlook for 2014-16.  On Saturday, it reviewed its 2012 forecast.  And starting tomorrow, it will analyse auto markets – as these are the largest single driver of demand – before issuing its 2014 Outlook next Saturday.

The chart above presents the dilemma facing companies, as they try to map out the future.  It shows two key prices:

Long-standing readers will remember benzene’s unique performance in 2008, when it successfully called both the top of the market in March, and then the bottom in November*.  So it would be tempting fate to simply ignore its performance this year, when its price has already fallen 22%.

On the other hand, the S&P 500 has delivered an equally stunning performance, and is up 19% since January.  This is particularly impressive given it has been delivered against a backdrop of weak/weakening growth in all the major economies and regions.

So what are we to believe about the future outlook?

Financial markets always claim predictive powers, and so most analysts suggest the S&P 500 is ‘looking through’ today’s problems to a sunlit future ahead.  They believe the genius of the central banks with their stimulus programmes has created a firm foundation for strong future growth.  And they dismiss suggestions that the stimulus has in fact just had a circular impact, supporting asset prices through the availability of cheap finance.

Fans of benzene, however, counter that it has a much sounder basis for prediction, as the blog summarised in the Financial Times in March 2012.  It is noteworthy that PTA prices, also cited in the FT as an indicator for China’s economy, are also down 14% this year.  This suggests that whilst central banks are keeping asset prices strong, it has become increasingly difficult to pass on today’s higher energy/food prices as consumers are forced to cut back.

It is hard to imagine two more contradictory views.  One suggests that central banks have rescued the global economy.  The other, that they have unintentionally made an already bad situation much worse.

Readers will, of course, make up their own minds.  But the blog’s money is, as always, on benzene.  And there is certainly support for this position from Coca-Cola, one of the world’s most successful consumer products companies.  Last week it reported revenues down 2% in 2012, with Q3 down 3%, whilst its CEO told investors:

“As we have all noted, emerging markets have become increasingly more volatile,  further exacerbating a challenging global landscape. Hence, disposable income  and consumer spending have become challenged and consequently have impacted the  overall growth of the non-alcohol ready-to-drink industry”

Latest benchmark price movements since January with ICIS pricing comments this week are below:
Benzene Europe, down 22%. ”Prices dipped to fresh yearly lows this week, alongside losses in both the US and Asia, as well as low domestic derivative offtake so far this month”
PTA China, down 14%. “Prices fell for the fifth consecutive week because of a supply glut.”
Naphtha Europe, down 2%. “Fundamentals are weak as oversupply and flat demand persist”
Brent crude oil, down 2%.
HDPE USA export, up 16%. “Globally, demand is weak. Availability of product for export remains very limited, and prices are too high for most markets”
US$: yen, up 11%
S&P 500 index, up 19%