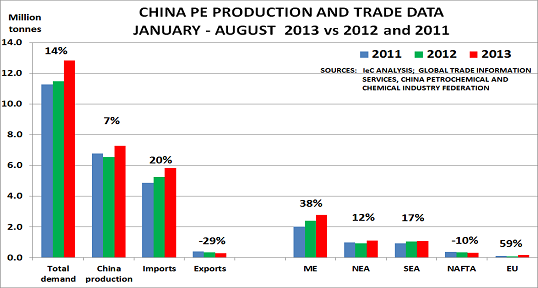 Anyone not closely studying trade data is likely to make some very expensive mistakes over the next few years.  The reason is that economics is no longer the sole driver for purchase decisions.  Instead, political and social issues can be of greater importance.

The trade data also provide important clues as to the sustainability of current demand levels.

In turn, HDPE’s strength suggests the prime driver for the demand increase has been the revival in construction activity.  This is closely allied to the shadow lending boom, which seems unlikely to continue into 2014.  Also worth watching is LDPE’s gain, which goes counter to global trends.  Whilst the slowdown in LLDPE volumes may indicate consumer concerns over food safety are easing.

Anyone now finalising budgets for 2014 therefore has some very difficult judgements to make.  Will the November economic plenum really tackle the shadow banking bubble?  If it does, construction could easily become a disaster area for HDPE sales.

Equally difficult to forecast is whether LDPE volumes will continue their recent revival and, if so, will this continue to be at LLDPE’s expense?

In turn, how might producers in the different geographies react to major changes in market demand?

Companies would be extremely short-sighted if they choose to ignore these far-reaching changes because they raise uncomfortable issues around the viability of current strategies.

Plus of course, it is no longer true that PE is primarily used in food packaging and hence immune from economic downturn.  Industrial packaging (stretch film, stretch hood, protective film, liners, rotomolding etc) is now nearly as large as food packaging and clearly linked to economic activity.  In addition, uncertain economic times slow growth rates in food packaging, as companies cut back on the capital spending needed to convert glass bottles and cans.

It all makes the blog very nostalgic for the SuperCycle years, when all one needed to forecast sales was a spread-sheet and the ability to decide on a ratio to an IMF forecast of GDP growth.  Today, however, detailed Scenario planning is clearly essential, given the range of different outcomes that are possible.