Turkey an export battleground for PVC as China slows 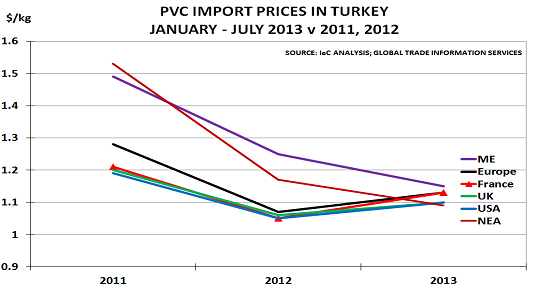 Turkey has always been one of the blog’s favourite markets, when it wants to understand what is happening to supply/demand balances.  The reason is that Turkey has a very successful downstream industry, but has failed to invest in upstream capacity.  This means it is essentially an opportunistic market from a sellers’ viewpoint.

During good times, exporters will only divert product from their domestic market if prices are high.  During bad times they will all compete to sell as much volume as possible.

So there are no prizes for guessing what the above chart shows about the state of global PVC markets, based on data from Global Trade Information Services.  Essentially all three major producing regions – US, Europe, China – are now heavily reliant on export sales.  Thus Turkey has become a fierce battleground:

True, there has been a marginal improvement in price since 2012.  But more significant is the way that small volumes have started to arrive from NEA (S Korea, China) as well as the ME (Iran, Saudi).  This highlights the dramatic change underway in China. where China Daily suggests that:

“High housing prices are squeezing every penny out of middle-income homebuyers’ pockets and thus seriously curbing their capacity and willingness to consume”.

Separately, GTIS data confirms the downturn, showing that China’s exports have leapt from 222KT to 522KT, whilst its imports have fallen from 727KT to 612KT over the 2011-2013 period.

Europe, of course, cannot afford not to sell to Turkey, given the terrible state of its own construction industry.  Just as the US is now forced to export >40% of its total production, due to the collapse of house-building, so EU exports have reached >25% of output.

Thus as the chart shows, it should be a good time to be a buyer in Turkey.  But as a senior figure in the Turkish industry told the blog:

“Turkey is a very competitive polymer buyer and has got a relatively advantageous labor cost structure compared to the EU and &US.  But the terrible situation of these markets means I have serious doubts about the health and sustainability of the actual condition”.

Given that PVC is normally a leading indicator for the global economy, this is not a cheerful conclusion.