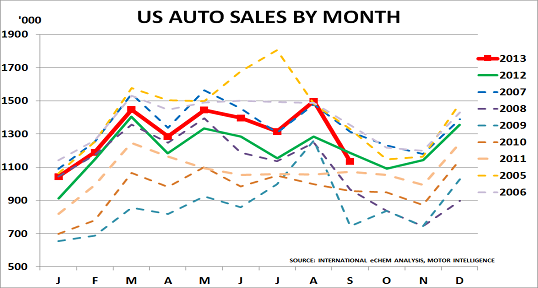 September wasn’t such a good month for US auto sales, as the chart shows.  It was the first time since May 2011 that sales were below those of the same month in the previous year.  Was this just a blip, explained by the fact that August was strong due to Labor Day being very early in September?  Or was this a sign of a changing trend?

A lot hangs on the answer.  Auto sales have powered ahead since 2011, with some analysts suggesting they could regain the 15 – 17m levels seen routinely from 1995 – 2007.  This has been great news for the economy, and for suppliers to the industry.  But the blog is more cautious.

The reason is that a large part of the strength in new car sales is due to high prices for used cars.  Sales of these cars dominate the market, with analysts expecting 41.25m to be sold in 2013 versus 15m new cars.  And used car prices have been sky-high recently, encouraging buyers to buy new, as the New York Times reports:

Only 10.4m new cars were sold in 2009, and just 11.6m in 2010.  So until recently there has been a great shortage of reasonably priced used cars available for sale.  Average prices today are thus $17926, compared to $14976 in 2009.  In turn, as the blog noted last month, auto makers have cleverly offered leasing deals for new cars that often make it possible for a used car buyer to afford a new car instead.

But now the dynamics of the used car market are changing, as the higher volumes of cars sold in 2011 onwards start to hit the dealerships.  Thus industry analysts Edmonds.com forecast the market is at a tipping point, where supply/demand for used cars is already starting to rebalance:

“Even though there’s a decline, prices are still high for used cars. It’s definitely a better time to buy than last year, but if you can wait, prices are just going to keep going down.”

Equally important, say dealers, is that buyers have a limited budget when they do go out to buy:

“For the foreseeable future, late-model compact and midsize cars and small sport utility vehicles …are in demand.  It’s that $12,000 car that’s the perfect sweet spot, the kind with a $250-a-month payment.”

The clear conclusion is that nobody really knows what may happen next in the US auto market.  Any company betting its future on just one outcome may find they have chosen right.  But companies that instead test their plans against a variety of possible outcomes will dramatically improve their chances of success.