US becomes ‘The Snail Economy’ as its population ages

There comes a moment in a debate when the argument is clearly won, and discussion moves on to practical issues of implementation.  We can see that process in action this week, following a major analysis in Barrons, the leading US investment magazine.  Titled ‘The Snail Economy’, its core argument is summed up in the chart above, which mirrors almost exactly the analysis of Boom, Gloom and the New Normal.  Thus as its cover page suggests: 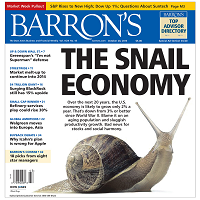 “Over the next 20 years, the US economy is likely to grow only 2% a year.  That’s down from 3% or better since World War 2.  Blame it on an aging population and sluggish productivity growth.  Bad news for stocks and social harmony”

The article itself goes on to demonstrate the rationale for this core statement in detail:

“The U.S. working-age population (Americans from 18 to 64 years of age) is projected to grow only 0.36% during the current decade and then limp along at 0.18% from 2020 to 2030. That’s well below the 1.81% rate that prevailed during the 1970s when baby boomers and women were streaming into the workforce. What was a demographic dividend now acts in reverse as boomers start to retire in large numbers, sharply raising their financial dependence on workers whose taxes fund their costly entitlement programs.”

And it then adds that of course this is not just a US phenomenon:

“The U.S. dilemma becomes more challenging because the whole world is aging, putting downward pressure on global growth. Most famously, Japan’s retirement-age population has risen steadily; it is expected to hit 26% of the total population by 2015 and top 29% by 2025, according to the United Nations’ Population Division. The aging of Japan has coincided with a scarcely growing economy since the 1990s.

Thus this week marks the moment when important business media finally began to give up on the idea that stimulus packages will somehow return the economy to previous growth levels.

The evidence for this is not new.  But human beings don’t like change.  And so until recently, most instead chose to share the wishful thinking of policymakers, that everything would soon be back to ‘normal’.

Today, however, the balance is shifting.  Not only has 5 years of stimulus completely failed to produce the promised results.  But also the survival instinct is leading people to look around for new answers.  Nobody likes to feel they are trapped in an increasingly difficult market with no apparent means of escape.