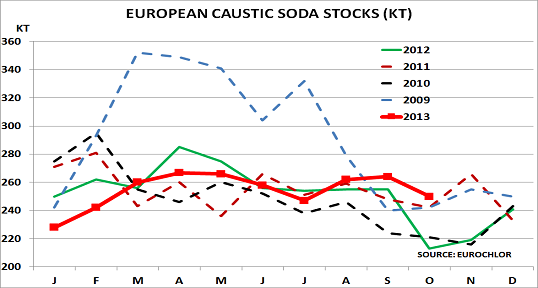 Chlorine and caustic soda are some of the most widely used chemicals.  Thus their performance is always a valuable leading indicator for the wider chemical industry and the economy itself.  So the chart above, based on Eurochlor data,  is a worrying sign:

This highlights the continuing problems in the European construction industry, and the growing difficulties in export markets.  Caustic soda sales have not only fallen to most major markets.  But imports have begun to appear from China for the first time since trade data began in 1999, with 50KT arriving in the EU so far this year.

Trade data from Global Trade Information Services show US producers are also seeing increased imports of caustic soda from China.  These have jumped back to 283kt in the year to August, after a fall to 152kt last year.  And net imports from NEA are back at 257KT versus 162kt in 2012, as opportunities reduce in China.  Thus US operating rates remain depressed at 79%.

This confirms the picture of a slowing market in China.  In addition, it shows how Chinese producers, as seen in Turkey’s PVC market, will always aim to keep plants running, even if this means taking low-margin netbacks in distant export markets.