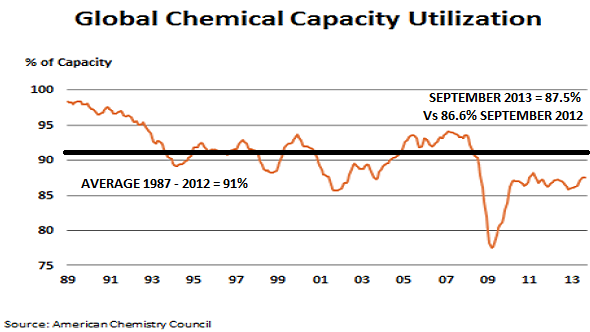 The latest American Chemistry Council report on global production shows output was up 3% versus September 2012, and just 18% above average 2007 levels.  There was a mixed picture in the main Regions:

Overall, therefore, as the ACC chart shows, capacity utilisation was 87.5%, well below the long-term average of 91%.  The only good news is that recent modest new capacity increases, up just 2% versus September 2012, meant operating rates improved from last year’s 86.6% level.

The problem, of course, is that a large number of companies are now investing in major new capacity, in the belief that all the central bank stimulus effort will lead to a return to strong growth.  But in fact, as the data shows, this capacity will find it very difficult to find a home.

A similar picture is shown in this week’s cover story in Chemical & Engineering News, the magazine of the American Chemical Society.  Its latest employment survey is titled ‘Its Not Over Yet’, and describes how today’s ‘Slow economy has chemists still searching for work, and trying clever strategies to find it’.

Its main survey Still Waiting for Good Times  includes analysis of the outlook by the blog – please click here to read the full article.