Nobody realised the BabyBoom had happened till long after it finished 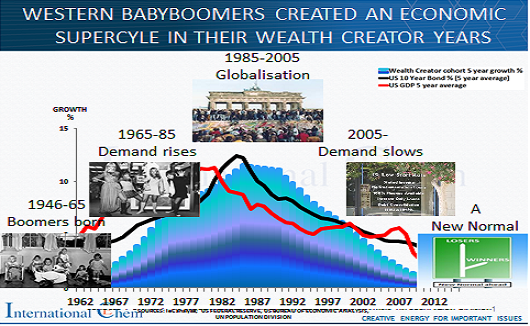 Milton Friedman received a Nobel Prize for economics in 1976, partly on the basis of his analysis that ‘inflation is everywhere and always a monetary phenomenon’.  It sounds an appealing insight, but of course it is wrong.  The reason is that it confuses cause and effect.

The above chart presents a different view, highlighting the true cause of inflation as being a surplus of demand relative to supply.  In turn, this explains why we now face the prospect of deflation:

It is of course quite understandable that Friedman should have come to his conclusion, and that the Nobel Committee should award their Prize.  Historical data on births was extremely limited at that point, even in the wealthy G7 economies.  As the blog found when writing chapter 1 of Boom, Gloom and the New Normal, annual reporting of Italian data only began in 1921 and US data itself only in 1909.

Equally, whilst it is now commonplace to describe the US Boomer period as being from 1946-1964, nobody realised it at the time.  Web research suggests the word was only first used in this context as late as 1977.  Certainly the blog’s 1973 edition of the Oxford English Dictionary (OED) does not reference the word, whilst the online OED gives no reference for first use.

Clearly one cannot blame Friedman, or the Nobel committee, for failing to recognise the critical importance of something of which nobody was then aware.  However, with the advantage of hindsight, we can now easily see that demographics was the critical reason for the rise in inflation that Friedman observed.  Similarly, the chart shows how the story has developed since then:

Unfortunately, misled by Friedman’s analysis, policymakers have assumed for the past decade that monetary policy can restore growth and inflation.  Firstly they boosted the US subprime boom, and since 2009 they have spent vast sums (nearly half of global GDP) in a fruitless effort to turn back the demographic tide.

But any rational and impartial observer can see they are wrong, and that we are instead entering a New Normal.  What this will mean for the economy is unknown, as there is no precedent to guide us.

Equally, it is only now, thanks to books like ‘Boom, Gloom and the New Normal’, that the link between demographics and economic performance is becoming clear for the first time.  Until recently, most people thought of older people as simply being a market for health care and walking sticks.  Like Friedman, they had simply not realised the now increasingly obvious fact, that demographics drive demand.