October’s US jobs increase in line with seasonal trends 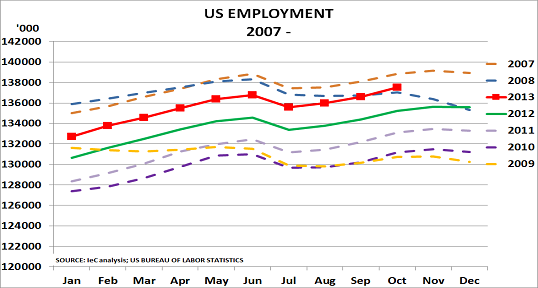 Last Friday’s US jobs report seemed to surprise most of the experts. But looking at the chart above, it is hard to see why US financial markets jumped 1% when the numbers were published:
•It shows the seasonal pattern in the US job market since 2007 (orange line)
•Clearly 2008 (blue) broke the normal trend as the Great Recession got underway
•But every year since then has seen slow but steady improvement
•So far, 2013 (red) is exactly following the 2012 pattern (green)

Equally, simple number-crunching shows that October’s job growth versus September averaged 921k between 2010-2012. So October’s gain of 940k jobs this year was hardly a major surprise.

The affair highlights once again how financial markets are now driven by high-speed computers, rather than human beings. The US Bureau of Labor Statistics provides the data for anyone who wants to analyse it. All that is needed is the ability to set out the data by month, to capture the seasonal pattern.

But today, as Forbes magazine notes, this kind of basic analysis has become irrelevant in financial markets:

“Computers have completely replaced the human specialists…The vast majority of the bid/offers we see on quote systems come from High Frequency Trading (HFT) systems…..The new world is now a war between machines. For some perspective, in 1999 at the height of the tech craze, there were about 1,000 quotes per second crossing the tape. Fast forward to 2013 and that number has risen exponentially to 2,000,000 per second. And yet there are fewer market participants today and actually less trading.

“All this noise comes from the High Frequency guys trying to game each other or fool traders. Today, 90 to 95% of all quotes come from High Frequency machines…This doesn’t imply share volumes, just quotes traveling on the tape.”

2 million quotes per second, and not a single human being involved in making a decision about whether to buy or sell. Instead the machines trade on algorithms programmed to read newspaper headlines at high speed.

Nobody can compete with the machines. Especially as HFT traders are being given free cash to fund their trading by the central banks, based on their mistaken belief that higher stock prices will create economic recovery.