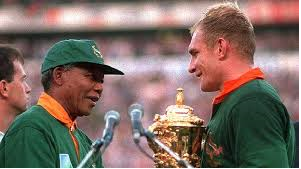 The blog would like to pay its respects to Nelson Mandela, who died overnight.

Everyone will have their own memories of the great man, their own sense of his character.

The blog will most remember his leadership through the long dark years of apartheid.  And perhaps even more importantly, his forgiveness when finally he was released and created the Rainbow Nation after the first post-apartheid elections.

When Mandela was born near the end of the First World War, racism was not a term of abuse but a reality in many parts of the world.  White people believed they were superior.  And when Mandela used the word ‘fight’ at his 1964 trial, it was not just as a rhetorical term:

“During my lifetime I have dedicated myself to this struggle of the African people. I have fought against white domination, and I have fought against black domination. I have cherished the ideal of a democratic and free society in which all persons live together in harmony and with equal opportunities. It is an ideal which I hope to live for and to achieve. But if needs be, it is an ideal for which I am prepared to die.”

Anyone who has ever stood in Mandela’s small cell in the Robben Island jail realises the harsh reality of the life sentence he received.  Looking out through the bars on the empty yard, it is hard to believe that he didn’t become bitter at his fate during his 27 years there.  Even harder to realise that his leadership of the other prisoners became a beacon across the country, and the world.

Mandela didn’t need social media to convey his thoughts.  In fact, even his picture was banned in S Africa until he was released.  But his thoughts were very profound.  He realised, despite the pain he had personally suffered, that he needed to show the white South Africans they were forgiven.

Thus when he came to present the Rugby World Cup to the winning S Africa team in Johannesburg in 2005, he wore a Springbok shirt as the picture shows.  This was for many the emblem of the hated regime.   Mandela did not wear it as a photo opportunity for the evening news.  In that moment, white S Africans knew their lives were safe, and that the new President had forgiven them.