China has burst the commodities superbubble

China’s New Normal policies are taking global commodity markets in a new direction, as I describe in my latest post for the Financial Times, published on the BeyondBrics blog

Commodity prices could well have further to fall, now China’s business model has changed. It is no longer aiming to achieve high levels of economic growth by operating an export-focused development model, supported by vast infrastructure spending. Instead, its New Normal policies aim to boost domestic consumption, by creating a services-led model based on exploiting the opportunities created by the power of the internet.

The only problem is that markets have failed to notice this change. They have fallen victim to the phenomenon of “anchoring” as identified by Nobel Prizewinner Daniel Kahneman, and assume the New Normal is similar to the Old Normal. Thus, much analysis on commodity markets still focuses on guessing “when will the rally begin?”

This approach ignores the potential for prices to instead fall further, back to the levels common before their China-inspired boom began in 2003, as no other country or region can possibly replace China now its demand has stalled. 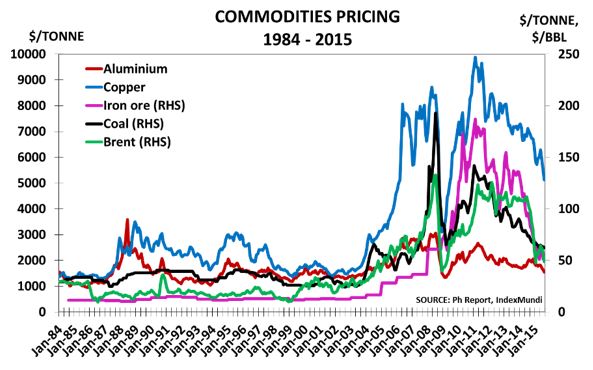 The problem is that the vast expansions of recent years have been based on two false assumptions. The first was that up to 3bn people were about to become middle class by western standards. The second was that this would drive a ‘super-cycle’ of new demand.

In its paper The rise of the middle class in the PRC in 2011, the Asian Development Bank argued: “Using $2–$20 (purchasing power parity) per capita daily income as the definition of middle class, majority of households in the PRC have become middle class by 2007.”

Understandably, many people heard the words “middle class” but didn’t understand the definition. Yet as the Pew Research Center reported recently: “People who are middle income live on $10-20 a day, which translates to an annual income of $14,600 to $29,200 for a family of four. That range merely straddles the official poverty line in the United States—$23,021 for a family of four in 2011.”

Pew’s report also confirmed that 84 per cent of the world’s population have incomes below the US poverty line. It also noted that 87 per cent of all those earning more than $50 a day live in North America and Europe, with just 1 per cent living in Africa, 4 per cent in Latin America and 8 per cent in Asia.

The wishful thinking was compounded by the stimulus policies adopted by central banks from 2004, first through the subprime bubble and then through quantitative easing. By keeping interest rates very low and then printing trillions of dollars, they created massive bubbles in financial and property markets. In turn, this created one-off ‘wealth effects’ which temporarily appeared to have boosted consumer demand.

Prices of key raw materials such as oil, copper, iron ore and cotton raced higher, in some cases to new all-time highs. The investment thesis was simple: the coming supercycle would inevitably require unprecedented volumes of raw materials, and provide earnings to match for those companies who chose to invest in the new capacity required. The commodity bubble thus paralleled earlier dotcom and subprime bubbles in featuring extravagant optimism and a surge in debt. Investors came to believe that a new investment paradigm was in place, under which previous valuation models no longer mattered.

Importantly also, they felt they had the power of the US Federal Reserve behind them, as the Fed continued to assume that creating a wealth effect through a rising stock market was key to economic stability. Since 2000, a whole generation of investors has been brought up to believe that the ability to forecast the Fed’s intentions is therefore more important than understanding the fundamentals of supply and demand. Investment success has instead flowed from following the ‘buy-on-the-dips’ theory.

Now it seems the commodity bubble is bursting. And, as before, investors may discover to their cost that leading companies of the bubble era have been, in Warren Buffett’s immortal phrase, “swimming naked” – paralleling Enron and WorldCom in dotcom times, Lehman Bros and AIG in subprime. The recent share price performance of some commodity bubble companies certainly suggests this time may not be so different after all.

Equally worrying is that commodity-exporting countries in a wide arc from Brazil through South Africa, Asia, Australia, the Middle East and Russia are now seeing major downturns in their economies, whilst vast surpluses have been created in key products. For example, oil inventory is at record levels around the world; aluminium surpluses are enough to build 16,000 747s; cotton inventories are enough to produce 129bn T-shirts.

A further problem with the commodity bubble is that the downturn is not contained within national borders. Developed country investors and companies had been delighted to fund EM commodity export expansions, due to the higher prospective yields on offer. Thus a recent paper from the Bank for International Settlements noted: “Outstanding USD-denominated debt of non-banks located outside the US stood at $9.2tn at September 2014, having grown from $6tn at the beginning of 2010.”

Too many companies and investors remain in denial about recent developments in commodity prices. They seem determined to wear their rose-tinted glasses until the last possible minute, suggesting that prices still have further to fall. But more rational observers may instead worry about the after-shocks that will impact those companies, countries, investors and lenders who chose to believe that China’s seemingly insatiable appetite for commodities had created a new investment paradigm