The Great Reckoning for policymakers’ failures has begun 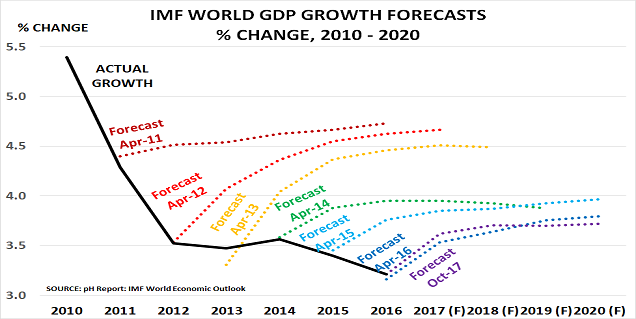 Next week, I will publish my annual Budget Outlook, covering the 2018-2020 period. The aim, as always, will be to challenge conventional wisdom when this seems to be heading in the wrong direction.  Before publishing the new Outlook each year, I always like to review my previous forecast. Past performance may not be a perfect guide to the future, but it is the best we have:

My argument last year was that companies and investors would begin to run up against the reality of the impact of today’s “demographic deficit”.  They would find demand had fallen far short of policymakers’ promises.  As the chart shows, the IMF had forecast in 2011 that 2016 growth would be 4.7%, but in reality it was a third lower at just 3.2%.   I therefore argued:

“This false optimism has now created some very negative consequences:

 Companies committed to major capacity expansions during the 2011 – 2013 period, assuming demand growth would return to “normal” levels
 Policymakers committed to vast stimulus programmes, assuming that the debt would be paid off by a mixture of “normal” growth and rising inflation
 Today, this means that companies are losing pricing power as this new capacity comes online, whilst governments have found their debt is still rising in real terms

“This is the Great Reckoning that now faces investors and companies as they plan their Budgets for 2017 – 2019.”

Oil markets are just one example of what has happened.  A year ago, OPEC had forecast its new quotas would “rebalance the oil market” in H1 this year. When this proved over-optimistic, they had to be extended for a further 9 months into March 2018. Now, it expects to have to extend them through the whole of 2018.  And even today’s fragile supply/demand balance is only due to China’s massive purchases to fill its Strategic Reserve.

Policymakers’ unrealistic view of the world has also had political and social consequences, as I noted in the Outlook:

“The problem, of course, is that it will take years to undo the damage that has been done. Stimulus policies have created highly dangerous bubbles in many financial markets, which may well burst before too long. They have also meant it is most unlikely that governments will be able to keep their pension promises, as I warned a year ago.

Of course, it is still possible to hope that “something may turn up” to support “business as usual” Budgets. But hope is not a strategy. Today’s economic problems are already creating political and social unrest. And unfortunately, the outlook for 2017 – 2019 is that the economic, political and social landscape will become ever more uncertain.”

As the second chart confirms from Ipsos MORI, most people in the world’s major countries feel things are going in the wrong direction.  Voters have lost confidence in the political elite’s ability to deliver on its promises.  Almost everywhere one looks today, one now sees potential “accidents waiting to happen”.

Understandably, Populism gains support in such circumstances as people feel they and their children are losing out.

The last 10 years have proved that stimulus programmes cannot substitute for a lack of babies.  They generate debt mountains instead of sustainable demand, and so make the problems worse, not better.

Next week, I will look at what may happen in the 2018 – 2020 period, and the key risks that have developed as a result of the policy failures of the past decade.