Saudi Arabia’s U-turn to revive oil output quotas is not working and fails to address the changing future of oil demand, as I describe in my latest post for the Financial Times, published on the BeyondBrics blog 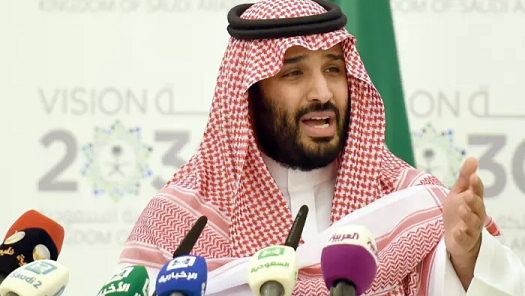 Saudi Arabia’s move into recession comes at an unfortunate time for its new Crown Prince, Mohammed bin Salman (known to all as MbS).

Unemployment is continuing to rise, threatening the social contract. In foreign affairs, the war in Yemen and the dispute with Qatar appear to be in stalemate. And then there is the vexed issue of King Salman’s ill health, and the question of who succeeds him.

This was probably not the situation that the then Deputy Crown Prince envisaged 18 months ago when he launched his ambitious “Vision 2030” programme and set out his hopes for a Saudi Arabia that was no longer dependent on oil revenues. “Within 20 years, we will be an economy that doesn’t depend mainly on oil . . . We don’t care about oil prices — $30 or $70, they are all the same to us. This battle is not my battle.”

The problems began a few months later after he abruptly reversed course and overturned former oil minister Ali al-Naimi’s market share policy by signing up to repeat the failed Opec quota policy of the early 1980s.

His hope was that by including Russia, the new deal would “rebalance” oil markets and establish a $50 a barrel floor under prices. In turn, this would boost the prospects for his proposed flotation of a 5 per cent stake in Saudi Aramco, with its world record target valuation of $2tn. 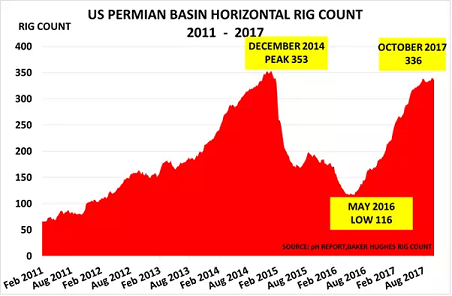 But, as the chart above shows, the volte face also handed a second life to US shale producers, particularly in the Permian basin, which has the potential to become the world’s largest oilfield. Its development had been effectively curtailed by Mr Naimi’s policy.

The number of high-performing horizontal drilling rigs had peaked at 353 in December 2014. By May 2016, the figure had collapsed to just 116. But since then, the rig count has trebled and is close to a new peak, at 336, according to the Baker Hughes Rig Count.

Even worse from the Saudi perspective is that oil production per Permian rig has continued to rise from December 2014’s level of 219 barrels a day. Volume has nearly trebled to 572 b/d, while the number of DUC (drilled but uncompleted) wells has almost doubled from 1,204 to 2,330. 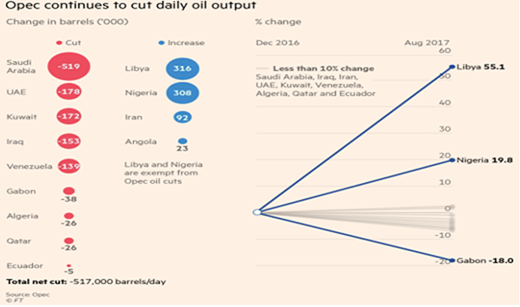 Equally disturbing, as the second chart from Anjli Raval’s recent FT analysis confirms, is that Saudi Arabia has been forced to take the main burden of the promised cutbacks. Its 519,000 b/d cut almost exactly matches Opec’s total 517,000 b/d cutback.

Of course, other Opec members will continue to cheer on Saudi Arabia because they gain the benefit of higher prices from its output curbs.

But we would question whether the quota strategy is really the right policy for the Kingdom itself. A year ago, after all, Opec had forecast that its new quotas would “rebalance the oil market” in the first half of this year. When this proved over-optimistic, it expected rebalancing to have been achieved by March 2018. Now, it is suggesting that rebalancing may take until the end of 2018, and could even require further output cuts.

Producers used to shrug off this development, arguing that demand growth in China, India and other emerging markets would secure oil’s future. But they can no longer ignore rising concerns over pollution from gasoline and diesel-powered cars.

India has already announced that all new cars will be powered by electricity by 2030, while China is studying a similar move. China has a dual incentive for such a policy because it would not only support President Xi Jinping’s anti-pollution strategy, but also create an opportunity for its automakers to take a global lead in electric vehicle production.

It therefore seems timely for Prince Mohammed to revert to his earlier approach to the oil price. The rebalancing strategy has clearly not produced the expected results and, even worse, US shale producers are now enthusiastically ramping up production at Saudi Arabia’s expense.

The kingdom’s exports of crude oil to the US fell to just 795,000 b/d in July, while US oil and product exports last week hit a new record level of more than 7.6m b/d, further reducing Saudi Arabia’s market share in key global markets.

The growing likelihood that oil demand will peak within the next decade highlights how Saudi Arabia is effectively now in a battle to monetise its reserves before demand starts to slip away.

Geopolitics also suggests that a pivot away from Russia to China might be opportune. The Opec deal clearly made sense for Russia in the short term, given its continuing dependence on oil revenues. But Russia is never likely to become a true strategic partner for the kingdom, given its competitive position as a major oil and gas producer, and its longstanding regional alliances with Iran and Syria. China, however, offers the potential for a much more strategic relationship, which would allow Saudi Arabia as the world’s largest oil producer to boost its sales to the world’s second-largest oil market.

China also offers a potential solution to the vexed question of the Saudi Aramco flotation, following the recent offer by an unnamed (but no doubt state-linked) Chinese buyer to purchase the whole 5 per cent stake. This would allow Prince Mohammed to avoid embarrassment by claiming victory in the sale while avoiding the difficulties of a public float.

The Chinese option would also help the kingdom access the One Belt, One Road (OBOR) market for its future non-oil production. This option could be very valuable, given that OBOR may well become the largest free-trade area in the world, as we discussed here in June.

In addition, and perhaps most importantly from Prince Mohammed’s viewpoint, the China pivot might well tip the balance within Saudi Arabia’s Allegiance Council, and smooth his path to the throne as King Salman’s successor.