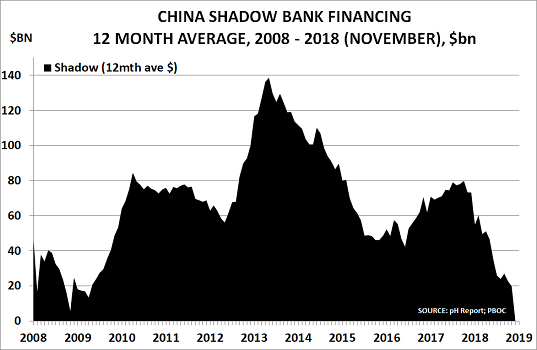 Last year it was Bitcoin, in 2016 it was the near-doubling in US 10-year interest rates, and in 2015 was the oil price fall.  This year, once again, there is really only one candidate for ‘Chart of the Year’ – it has to be the collapse of China’s shadow banking bubble:

At that point, Xi took charge of economic policy, and slammed on the brakes. November’s data shows it averaging just $20bn again.

The impact on the global economy has already been immense, and will likely be even greater in 2019 due to cumulative effects.  As we noted in this month’s pH Report:

“Xi no longer wants China to be the manufacturing Capital of the world. Instead his China Dream is based on the country becoming a more service-led economy based on the mobile internet.  He clearly has his sights on the longer-term and therefore needs to take the pain of restructuring today.

“Financial deleveraging has been a key policy, with shadow bank lending seeing a $609bn reduction YTD November, and Total Social Financing down by $257bn. The size of these reductions has reverberated around Emerging Markets and more recently the West: 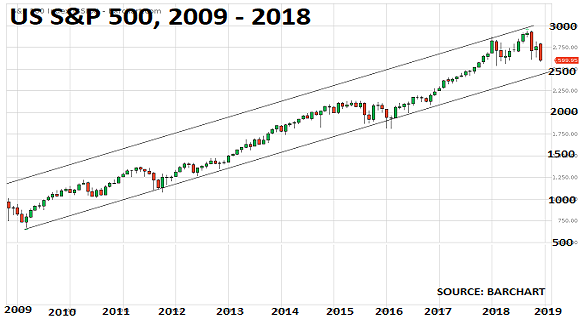 As I warned here in June (Financial markets party as global trade wars begin), the global stock market bubble is also now deflating – as the chart shows of the US S&P 500.  It has been powered by central bank’s stimulus policies, as they came to believe their role was no longer just to manage inflation.

Instead, they have followed the path set out by then Federal Reserve Chairman, Ben Bernanke, in November 2010, believing that:

Now, however, we are coming close to the to the point when it becomes obvious that the Fed cannot possibly control the economic fortunes of 325m Americans. Common sense tells us that demographics, not monetary policy, drive demand. Unfortunately, vast amounts of time and money have been wasted by central banks in this  failed experiment.

The path back to fiscal sanity will be very hard, due to the debt that has been built up by the stimulus policies.  The impartial Congressional Budget Office expects US government debt to rise to $1tn.

Japan – the world’s 3rd largest economy – is the Case Study for the problems likely ahead:

CHINA MOVE INTO DEFLATION WILL MAKE DEBT IMPOSSIBLE TO REPAY 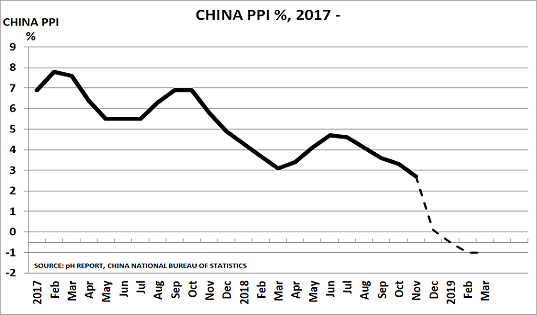 Since publishing ‘Boom, Gloom and the New Normal: how the Ageing Boomers are Changing Demand Patterns, Again“, in 2011 with John Richardson, I have argued that the stimulus policies cannot work, as they are effectively trying to print babies.  2019 seems likely to put this view to the test:

China’s stimulus programme was the key driver for the global economy after 2008.  Its decision to withdraw stimulus – confirmed by the collapse now underway in housing and auto sales – is already putting pressure on global asset and financial markets:

This is why the collapse in China’s shadow lending is my Chart of the Year.